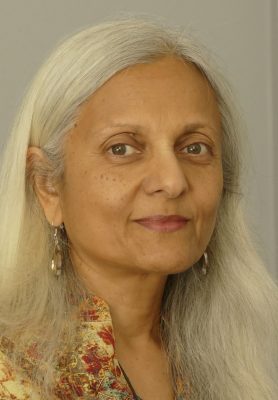 Threads of Peace: How Mahatma Gandhi and Martin Luther King Jr. Changed the World (Caitlyn Dlouhy Books, 2021) took me all of nine years from contract to publication. When I began writing my first draft, I knew I’d need to look for photos. 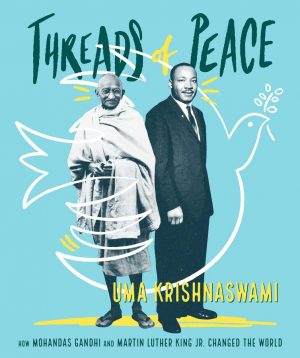 I had decided to use a combination of archival images and photographs that my husband and I had taken in India and the United States in places important to the lives of both Mahatma Gandhi and Reverend King. I had my mother’s autograph book, signed by Gandhi himself. I thought I’d look as well for some contemporary photographs of places in South Africa to round out the Gandhi story.

Research yielded treasures. I found a photo of a British Imperial medal of the same vintage as one that Gandhi had given back to the British government, saying he could not in conscience keep it. I found the admission book with young Gandhi’s signature in the archive of the Inner Temple in London (the legal association where Gandhi trained as a lawyer). I found photographer Flip Schulke’s image of the King family at dinner, with a photo of Gandhi hanging high on a wall, as if watching over the parents and their children.

Sometimes a photograph gave me material that I could work into the text. Occasionally, it gave me enough for a sidebar.  Sometimes it made me cut a description of a scene, because the picture had greater impact than any words possibly could.

Studying the first-pass proofs of a forthcoming book is always a humbling experience. With this book, it also led me to realize how little I knew, as a word-shuffler, about the role of design in the production of a book.

The designer added footprints to the page with the Inner Temple log book. Those footprints trail right into the courtyard where Gandhi once walked. They seem to link past and present, words and images, adding urgency and momentum to the page. 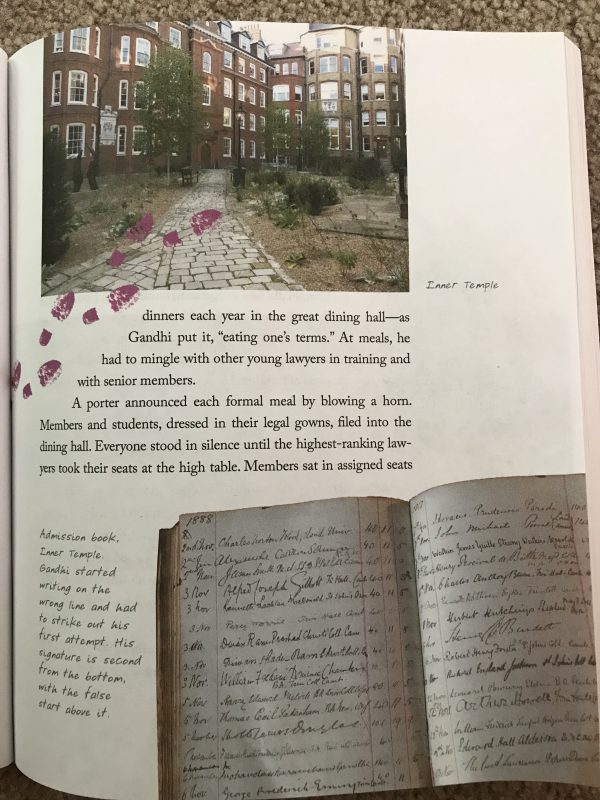 They also foreshadow other footprints, 107 pages later, pacing us through the first tense days of the Montgomery bus boycott. 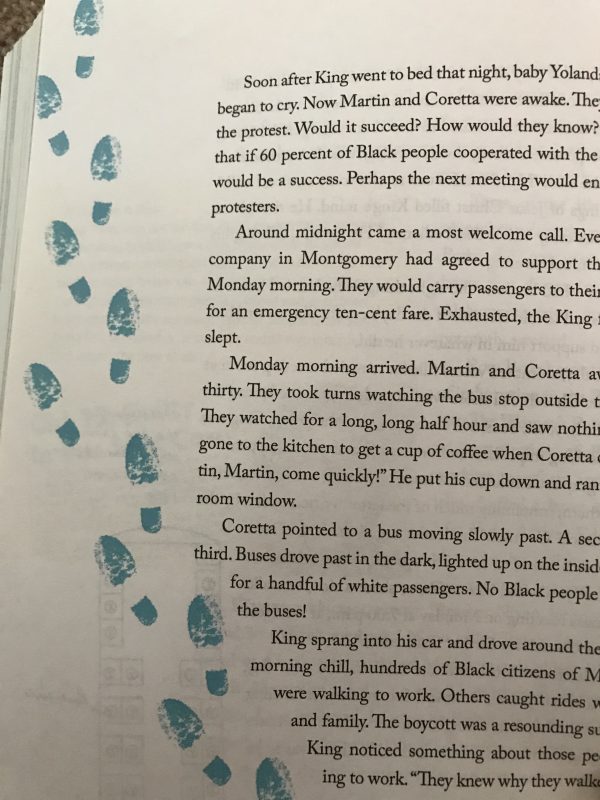 Design gave a tensile strength to another set of images in my text—the threads of the title, drawn from Gandhi’s use of spinning and weaving as symbols of Indian self-sufficiency. Threads recur when I write of Howard Thurman requesting a swatch of cloth woven from thread spun by Gandhi. Threads were my metaphor as well for the surprising globalization of continuing nonviolent movements for justice and equality. The book’s design picks up that metaphor and employs it in chapter headings, in captions and in the placement of sidebars.

My first draft, years ago, was tentative and unsure. I needed to learn how to tell this story for children—a story only to be found in scholarly texts and doctoral dissertations. But once the words began to take shape, the images created an interwoven narrative. In the book, they offer visual spaces for young readers to deepen understanding of these times before their own. Design supports connections—text to text, text to reader. It urges the reader to linger. It foreshadows, echoes, adds structure and emphasis. Without the power of the visual, this book could not have become this book. 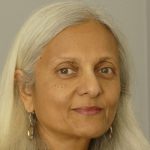 Uma Krishnaswami was born in India and now lives in British Columbia, Canada. Threads of Peace: How Mohandas Gandhi and Martin Luther King Jr. Changed the World, was published by Caitlyn Dlouhy Books/Atheneum. Uma teaches in the MFA in Writing for Children and Young Adults program at Vermont College of Fine Arts.