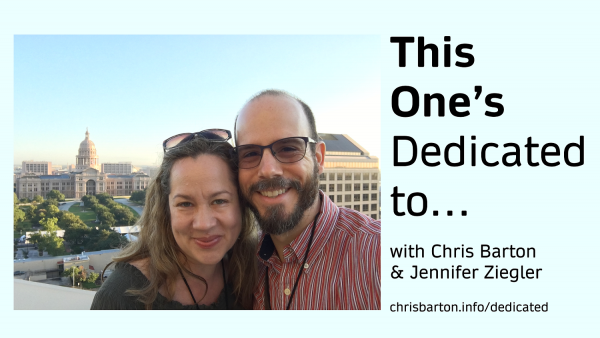 By Chris Barton and Jennifer Ziegler

We know that’s not quite how the old saying goes. But time — the scarcity of it, the abundance of it, the passage of it, how we choose to fill ours or ask others to spend theirs — has shaped all aspects of our new kidkit video series, “This One’s Dedicated to…”

For “This One’s Dedicated to…,” we chat briefly with our fellow children’s authors (such as Karina Yan Glaser, Gordon Korman, K.A. Holt, and Cyn herself) about the dedications in their books and then edit those exchanges down into a few minutes of kid-friendly conversation on YouTube.

The idea of doing something along these lines occurred to us a long while ago, and it’s a natural fit for the two of us. We love talking with people, connecting with them, and introducing them to each other.

But back then, between our book-making responsibilities, teaching work, conference appearances, and school-visit travels, we couldn’t see making room in our schedules for a new undertaking like this one.

As writers, however, we’ve learned to pay attention to the ideas that won’t leave us alone, that keep returning month after month, year after year. Such ideas have a reason for persisting, some deeply resonating theme or personal pull that just won’t go away no matter how long we try to ignore it.

And after entire seasons — spring 2020, and then summer — passed without our being able to casually get together with friends or spontaneously hang out with other bookish types at conferences and festivals, we were ready for some sort of structure in our lives that might restore that regular sense of community.

Having a bit of free time, thanks to the pandemic’s disruption of publishing and school-visit schedules, at last helped nudge us in the direction of “This One’s Dedicated to…”

It wasn’t just our time that was a factor, though. For nearly a decade, Chris’ monthly newsletter, Bartography Express, featured a two-question Q&A and book giveaway spotlighting another author (and often illustrator, too). Those brief exchanges via email sometimes spanned hours, sometimes weeks.

While the word count was low, authors know what a ridiculous amount of time we may invest in getting the phrasing just right for those sorts of things — time that could be spent making books or tending to other aspects of our lives. Supporting our community remained important to us, but Chris stopped being comfortable asking others to sacrifice their time and energy that way.

But a half-hour conversation via Zoom — a conversation for which no preparation is necessary on the part of our guests, because we’re simply talking — is another story.

And given how personally meaningful a book dedication can be, on top of the vast investment of one’s life that goes into creating a book, it’s no surprise that our guests are eager to have that opportunity — that time — to elaborate on the connection between the stories in their books and the stories behind their dedications.

Yes, it takes time for us to edit those recordings down to five- to ten-minute videos, but that’s our time; nobody else is asking us to spend it that way. And we suspect that the whole process takes us less time than it used to take Chris’ interviewees to satisfactorily answer a couple of questions via email.

As for the results: Teachers, librarians, parents, and young readers themselves who have enough time, say, to sing along to “Hey Jude,” have all the minutes and seconds it takes to watch Don Tate explain why — so many books into his career — he dedicated William Still and His Freedom Stories (Peachtree, 2020) to his mom.

Books are representative of a point in time — in the lives of both creators and readers, and in the culture they share. And reflecting on an author’s dedication can help readers engage with a book on a deeper level, connecting them to people and stories that are beyond the page, yet still part of the book.

And that, we believe, is worth their time. 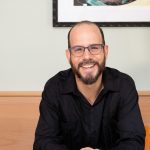 Chris Barton is the author of picture books including bestseller Shark vs. Train, Sibert Honor-winning The Day-Glo Brothers, Orbis Pictus honoree Dazzle Ships, and Whoosh! Lonnie Johnson’s Super-Soaking Stream of Inventions, included on 21 state reading lists. His newest books include Fire Truck vs. Dragon, What Do You Do with a Voice Like That?, All of a Sudden and Forever: Help and Healing After the Oklahoma City Bombing, and the upcoming How to Make a Book (About My Dog). Chris and his wife, YA/middle-grade novelist Jennifer Ziegler, live in Austin, Texas, where Chris has advocated for greater diversity in children’s literature by co-founding the Modern First Library program with BookPeople. 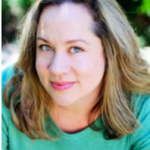 Jennifer Ziegler is the author of the middle grade Brewster Triplet Series for Scholastic—Revenge of the Flower Girls, Revenge of the Angles, Revenge of the Happy Campers, and Revenge of the Teacher’s Pets— as well as three young adult novels for Penguin Random House— How Not to Be Popular, Sass & Serendipity, and Alpha Dog. Her books have been featured on the Lone Star List, the International Reading Association’s Young Adults Choice List, recommended on NPR‘s “Tell Me More,” and options for film and stage.