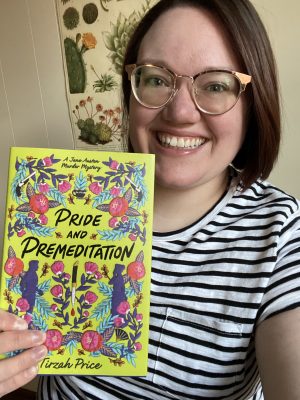 The biggest question I’ve received from readers when they hear that I’ve written a murder mystery retelling of Pride and Prejudice is why? I don’t know if they ask this because they think that Austen is somehow sacred, or if the mash up seems so incongruous, but I always think, Why not?

Pride and Premeditation, the first in the Jane Austen Murder Mysteries (HarperTeen, 2021), marries two of my favorite genre loves: historical fiction and mysteries. The tone is upbeat and a bit irreverent with an ahistorical setting, and the characters definitely don’t always follow the rules of Regency-era England. When I sat down to write the first book, Lizzie’s voice flowed and I felt like I was just along for the ride, which was a very different feeling from my previous attempts at writing retellings.

Over the years, I’ve tried my hand at retelling fairy tales and classics alike, in a variety of genres. Without fail, I’d get caught up in all the ways I was reimagining the source material, or interpreting it in a new setting—emphasis on the source material. Plot problems would arise, and I would (metaphorically) stare into a corner, trying to make it all work by “staying true” to the original tale. Unsurprisingly, these early attempts at retellings were never finished, let alone saw the light of day. 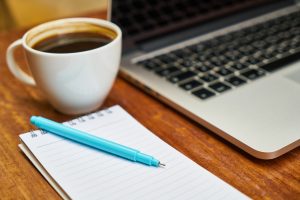 But when writing Pride and Premeditation, I approached plot, worldbuilding, and character development with the mindset of complete freedom.

I mean, if you’re writing Lizzie Bennet as an aspiring barrister who wants to solve a murder case, what sense is there in limiting yourself? The freedom to run headlong into wild ideas without worrying about deviating too much from the original source material was what allowed me to not only get through the first draft, but it also served me well in revision. 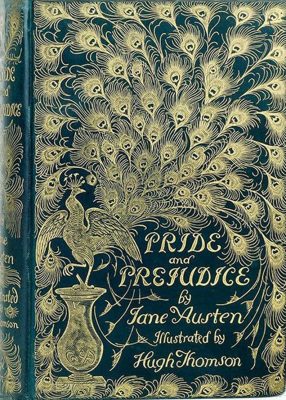 Whenever I would fall down a plot hole (and it was a mystery retelling, so you best believe that there were many plot holes in the first draft), instead of becoming overwhelmed with making a solution work with Pride & Prejudice (1813), I was able to envision a solution that worked for Pride and Premeditation, my own vision.

Not only was letting go of a perceived need to stay true to the original more fun, but if I focused on all of the exciting ways I could twist something, I wouldn’t get as disappointed when I had to scrap an entire scene, storyline, or subplot. The mindset allowed me to bring new energy to my drafting and revision process, and it got me thinking about other ideas and projects in drawers that I was clinging to with a vise grip. What was actually stopping me from letting go of how I thought I needed to tell a story, and radically reimagining it into something that excited me?

Of course, I also needed something to ground Pride and Premeditation, especially if I wanted it to be recognizable in any way. I know Jane Austen fans care passionately about her novels, and I didn’t think I’d make anyone happy if I deviated too much. I began to search for anchors within the original text that I wanted to draw over to the retelling.

For Pride and Premeditation, it was character—the essence of the characters and their overarching desires are the same, even if they were in completely different contexts. Lizzie is still striving for happiness and fulfillment on her own terms, and Darcy is someone who cares about doing the right thing and taking care of his family. Other character desires remain largely unchanged, even if their motivations differ according to their new settings and premise.

Setting also provided an interesting challenge, as my setting is quite different from Austen’s, even if they do share a lot of the same trappings. I didn’t want the Regency setting to be merely set dressing, so I tried to change only the things that really needed to shift in order for the characters to achieve their goals.

I gave Lizzie certain liberties that young ladies in the early 1800s wouldn’t have necessarily had, but I also made sure that the mannerisms, etiquette, and real historical settings were described as accurately as possible. I naively thought that this might mean I’d have to do less research, but that turned out to not be the case—I did so much research about the time period, so that my deviations were intentional rather than (I hope!) sloppy.

In the end, I hope that readers both familiar with and new to Austen will enjoy sleuthing alongside Lizzie Bennet. It doesn’t matter how old or familiar a tale might seem—there are always exciting new ways to reimagine it, and young readers eager to discover it for the first time.

Tirzah Price is the author of the Jane Austen Murder Mysteries. She grew up on a farm in Michigan, where she read every book she could get her hands on and never outgrew her love for YA fiction. She holds an MFA in Writing for Children & Young Adults from Vermont College of Fine Arts, and is a former bookseller and librarian.

Now, she’s a contributing editor at Book Riot. When she’s not writing, reading, or thinking about YA books, she splits her time between experimenting in the kitchen and knitting enough socks to last the fierce Michigan winters.