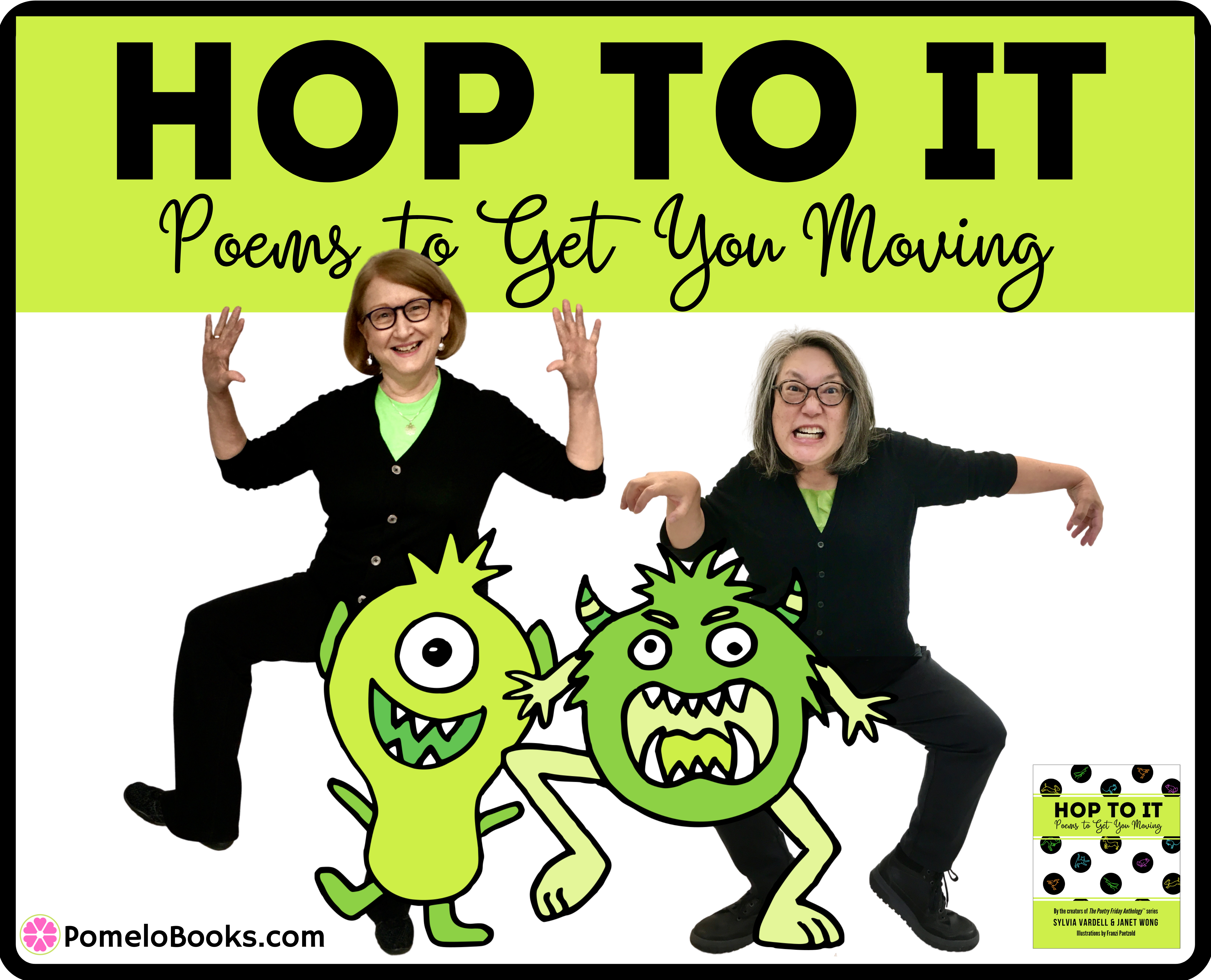 By Janet Wong and Sylvia Vardell

Janet: More than a year ago, back in February 2020 (although it seems like 2010…) we had an open call for poems for HOP TO IT: Poems to Get You Moving (Pomelo Books, 2020). Our plan was to curate an anthology of 75 poems that encourage movement—short poems to help “get the wiggles out.”

We first thought about doing a movement-themed book at the end of 2015, after an energizing session on that topic for NCTE in Minneapolis. But then we decided to focus on the reading-writing connection instead—and spent the next few years creating the Poetry Friday Power Book series, followed by a book of “morning announcement poems” for principals  titled GREAT MORNING! Poems for School Leaders to Read Aloud (Pomelo Books, 2018).

Four years after we first had the idea for a book of movement poems, it popped up again, and we decided that it was finally time to hop to it! 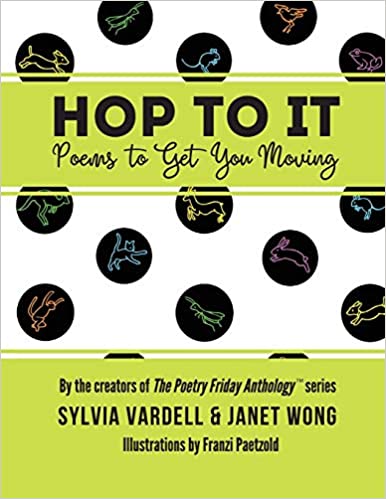 Sylvia: Right! Any time we do a presentation, we invite the audience to participate in reading a poem along with us—with a repeated line or key word or fun motion—and those poems always get a great response. So, we decided to make this a focus of the next book with as much physical movement as we could inject.

Research has shown that we are becoming a very sedentary society and many children have difficulty paying attention and learning when they have to sit so much. We thought, Let’s show them how active poems can be!

Janet: We brainstormed a list of movements to challenge poets to consider: clapping your hands, drumming on your desk, dancing, bending, shrugging, flexing, stretching, reaching, toe-tapping, and more.

We wanted kids to be able to move easily to the poems for a quick “brain break,” such as by simply walking in place while reading “Walk One Mile” by Baptiste Paul and Miranda Paul. 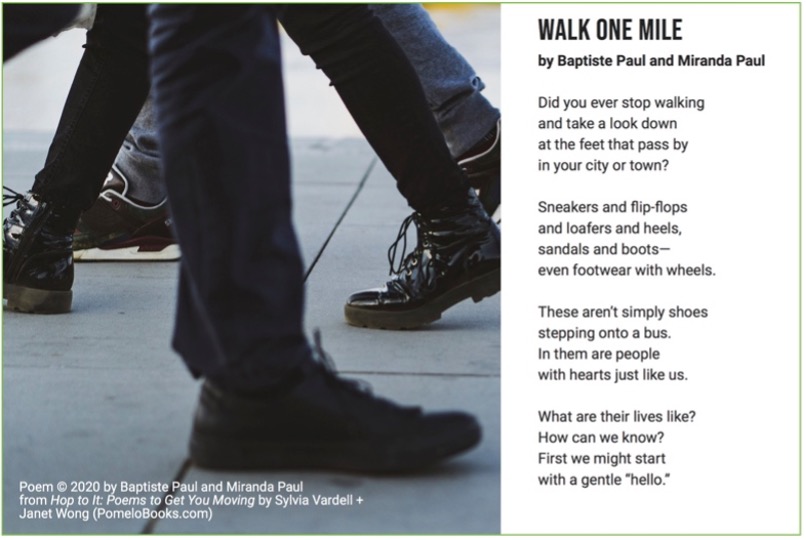 Sylvia: I posted a graphic with this list on my Poetry for Children blog, alongside a list of poem elements to incorporate, from repetition to alliteration to similes to suspense.

We spread the word on social media and watched the submissions roll in!

Janet: And it was really satisfying to have so many poems that are exemplars for different examples of poetic forms and techniques, which we highlight in one of the “content bubbles” on each poem page and also gather together in “A Mini-Glossary of Poetic Forms and Techniques” in the book’s extensive back matter. 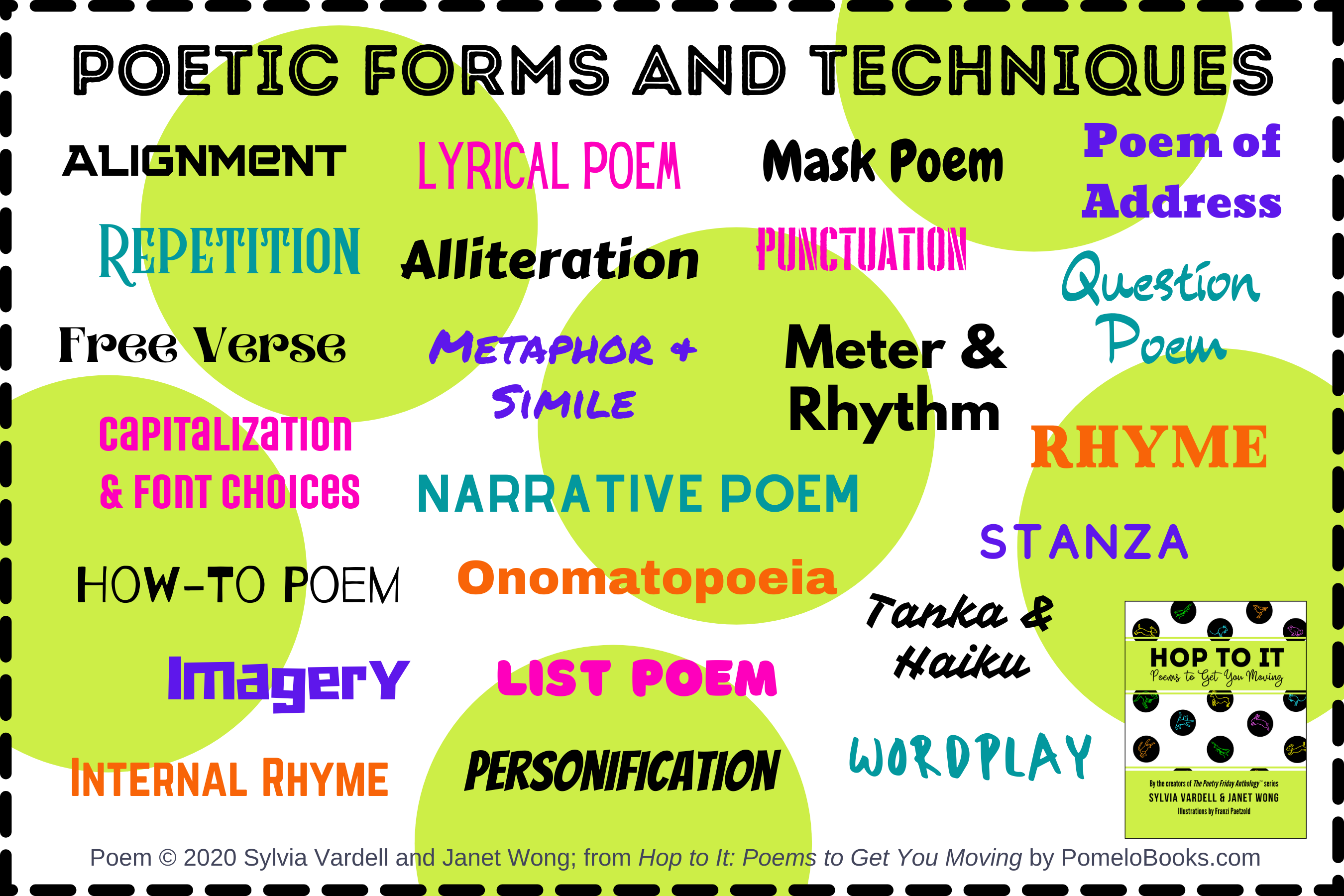 When it comes to modeling poetry skills, “When I Move” by Carole Boston Weatherford, for example, is a master lesson on the use of repetition. 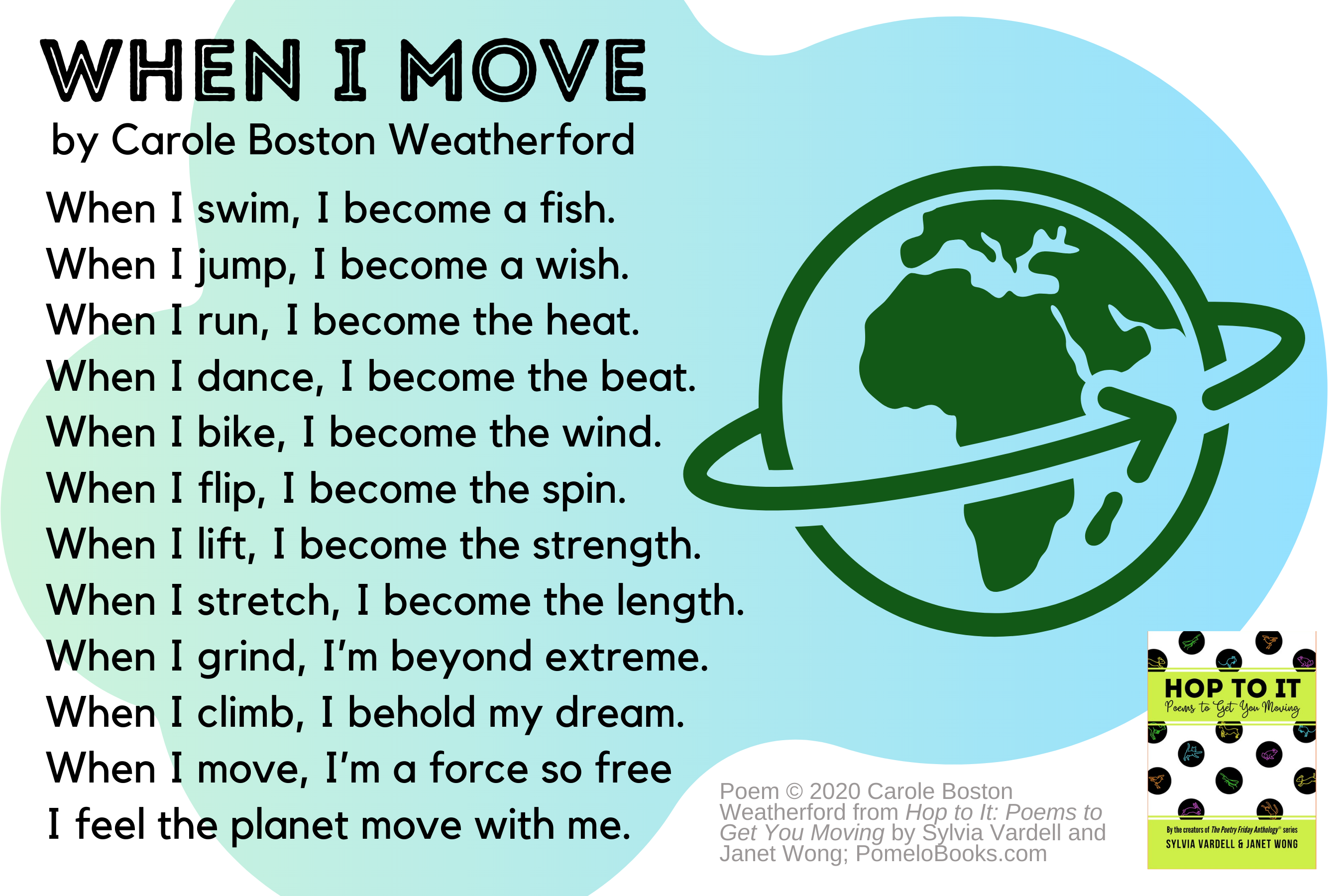 Janet: Knowing that we wanted the book to have only 75 poems meant that we automatically would have to say no to a lot of poets whose work we love. Saying no is the hardest part of creating any anthology, but it’s especially difficult for us as we’ve worked with approximately 200 poets.

As it was, we kept expanding the yes list—with the number of poems in the book creeping upwards beyond 75. We made ourselves stop when we reached 100 poems (by these 90 poets).

Sylvia: Our original plan was to accept poems through March and publish the book in August. But then 2020 happened…and the pandemic changed things on every front.

We wondered whether we should expand the theme of the book and decided to include poems about topics such as COVID-19, mask-wearing, staycations, keeping connected with friends, and Zoom.

Right after we made that decision, the social justice protests started appearing on the news and we felt compelled to expand our theme once more.

Janet: The trick was to stay true to the overall theme of physical movement, which I think we’ve done because the pandemic-themed poems and social justice-themed poems all contain a movement connection of some sort. There are poems about exercising your voice, standing up for what you believe in, marching, and raising your fist in the air in solidarity, and even a poem on that gets us winking and energizing our eyes. 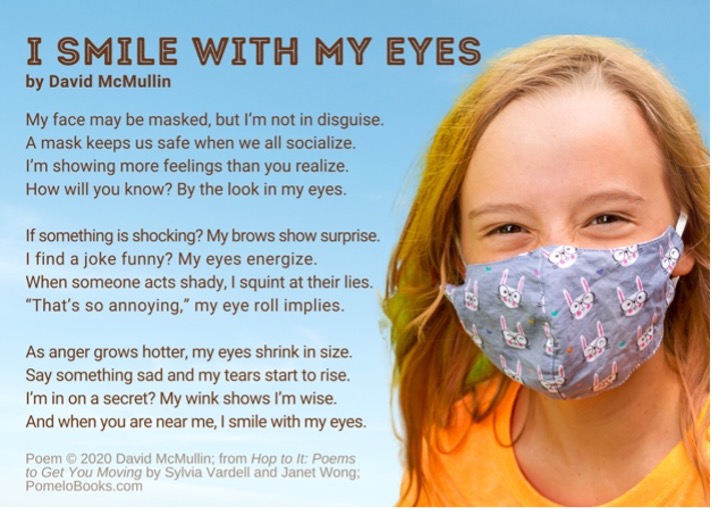 Sylvia: The result, we think, is a book that captures our times and helps us move forward while still keeping a focus on childhood experiences, physical interaction, and emotional truths. Once we finish a book, we devote a lot of energy to spreading the word about the book out in the world.

Creating a new anthology is just part of the process; book promotion is the next crucial step. So, we’ve taken as many silly photos of us as possible to post on social media; we’ve held Zoom poetry parties with excerpts on our Pomelo Books Vimeo channel; and we’ve posted “digital postcards” with a variety of graphics on our Pomelo Books Pinterest page. We’ve been generating lots of comments, connections, and sharing.

Our absolutely favorite thing is how the poets themselves are helping to spread the word about the book online and in their own communities.

Janet: I’m happy to say that I think we are reaching a wider range of readers than ever before because of the wide variety of poets in Hop To It; we have a few dozen new and “new-to-us” poets, particularly #ownvoices poets.

To me, the best thing about anthologies—in contrast to collections by a single poet—is the way they elevate new voices and also include writers we might know only for their prose. Including a wide variety of writers from different genres is good for poetry; when we show children that their favorite novelists or picture book authors also write poems, we broaden the appeal of poetry as a genre. 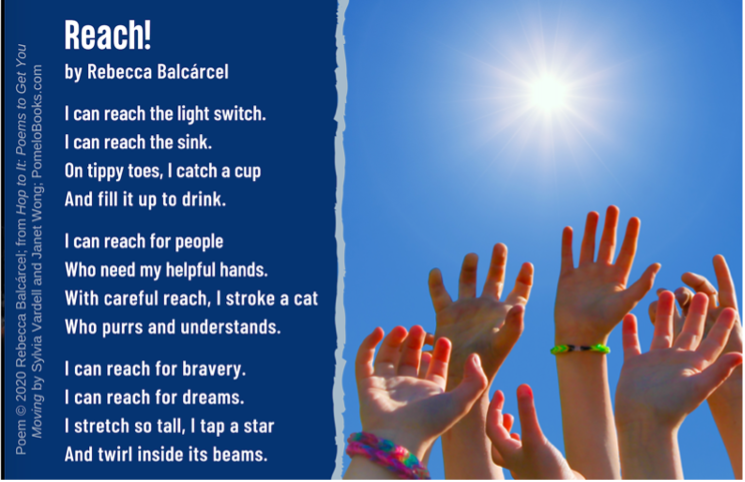 Janet: I’ve been sharing poems from the book via Zoom to teachers, librarians, parents, and students (PreK through university) all over the world, and kids have been really opening up and responding with poems of their own. In these stressful times, a poem like “The Artist” by Mariahadessa Ekere Tallie (see this video) resonates strongly with children and inspires them to unlock their feelings.

The pandemic has often called on us to exercise superpowers that we simply can’t produce on demand. Being able to talk about things that go wrong—and making light of them—is a real gift that we can give to children. “Superhero” by Cynthia Leitich Smith tells kids that it’s okay to land with a thud (or even three of them). We just need to hold our heads up, try again…and fly high in our imaginations. 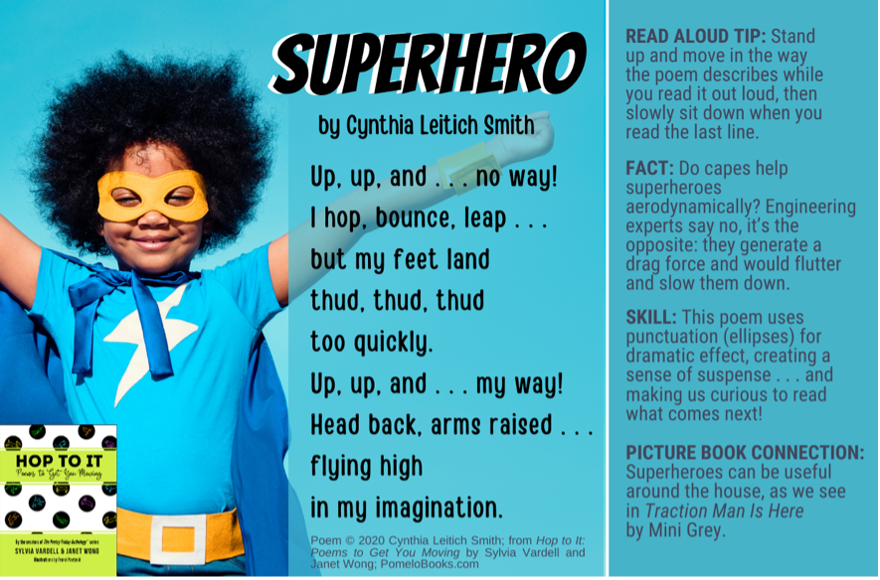 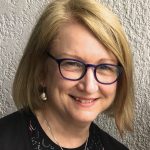 Sylvia Vardell is Professor in the School of Library and Information Studies at Texas Woman’s University; her current work focuses on poetry for children, including the nationally recognized blog, Poetry for Children. 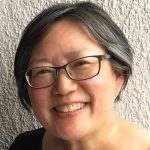 Janet Wong is the author of more than thirty books for children and teens on a wide variety of subjects, including identity: A Suitcase of Seaweed & More (Pomelo Books, 2019).

Together, Sylvia and Janet are the forces behind the Poetry Friday books published by Pomelo Books.