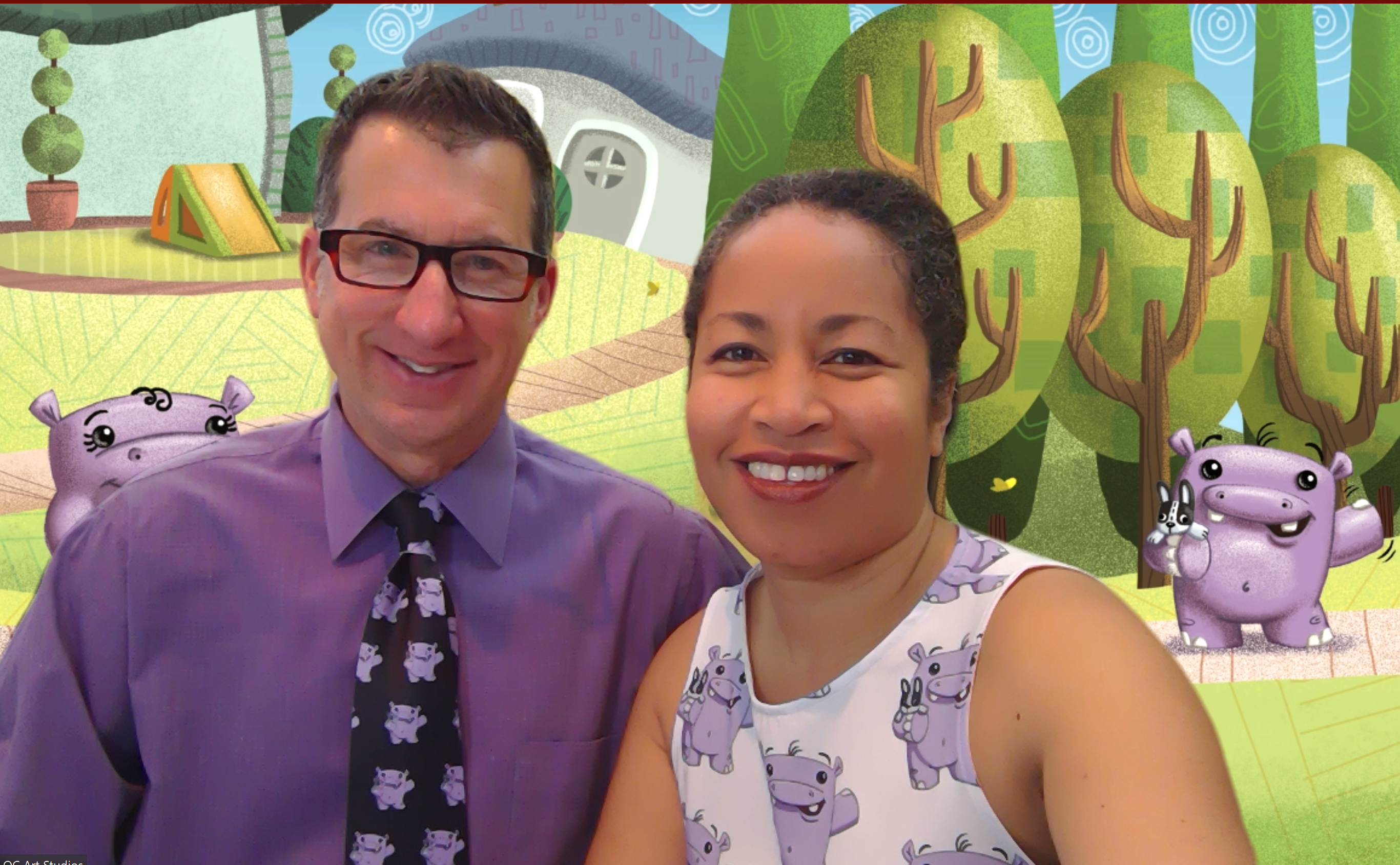 Today I am so pleased to welcome the illustrator/author debut duo Larissa and Keith Marantz. From being inspired by their own children to working as a team, they’ll share their unique path to publication. 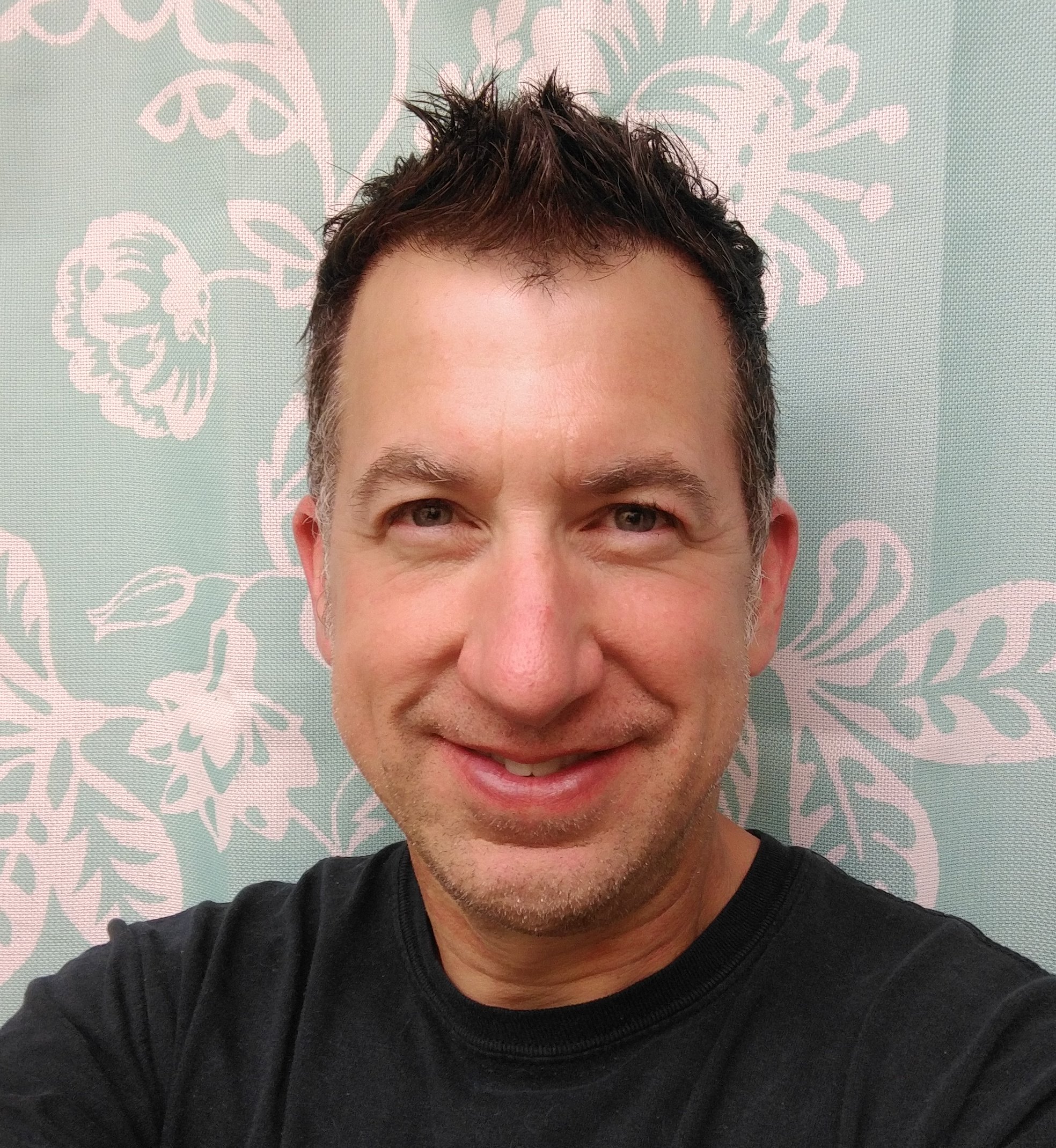 Keith: Well, we had young readers at home.  Our kids were our inspiration and first audience (and first critics). I had pursued writing screenplays years earlier but didn’t stay with it very long due to the economics of it all.

Years later when one of our daughters drew a bunch of characters for art class that Larissa was teaching, it inspired us to write stories about them. Our other daughter was the inspiration for our Clyde the Hippo (Penguin Workshop, 2020) book series when she asked for a pet, and I had made up a story about not needing a pet because we already had a hippo hiding in the backyard.

How did you take your writing from a beginner level to publishable?

Our incredible literary agent definitely helped, and fortunately for us, she used to be an editor at HarperCollins!

Something else that is important is to really understand the fundamental elements of story, character development, and hero’s journey. Even though picture books are short, those things are often crucial in creating a strong picture book. When we work together on new projects, we do our best to develop a strong character before we begin. We are both continually developing new stories with these things in mind.

Knowing the personality, the strengths and flaws of your main character allows us to imagine how they’d respond in various scenarios and obstacles. When we were working on our Clyde the Hippo books, we were so intimately attuned to how Clyde would feel in certain situations, which made it really easy to write. It also helps when you base your character a little off of yourself, and Clyde is definitely a worrier like Keith. 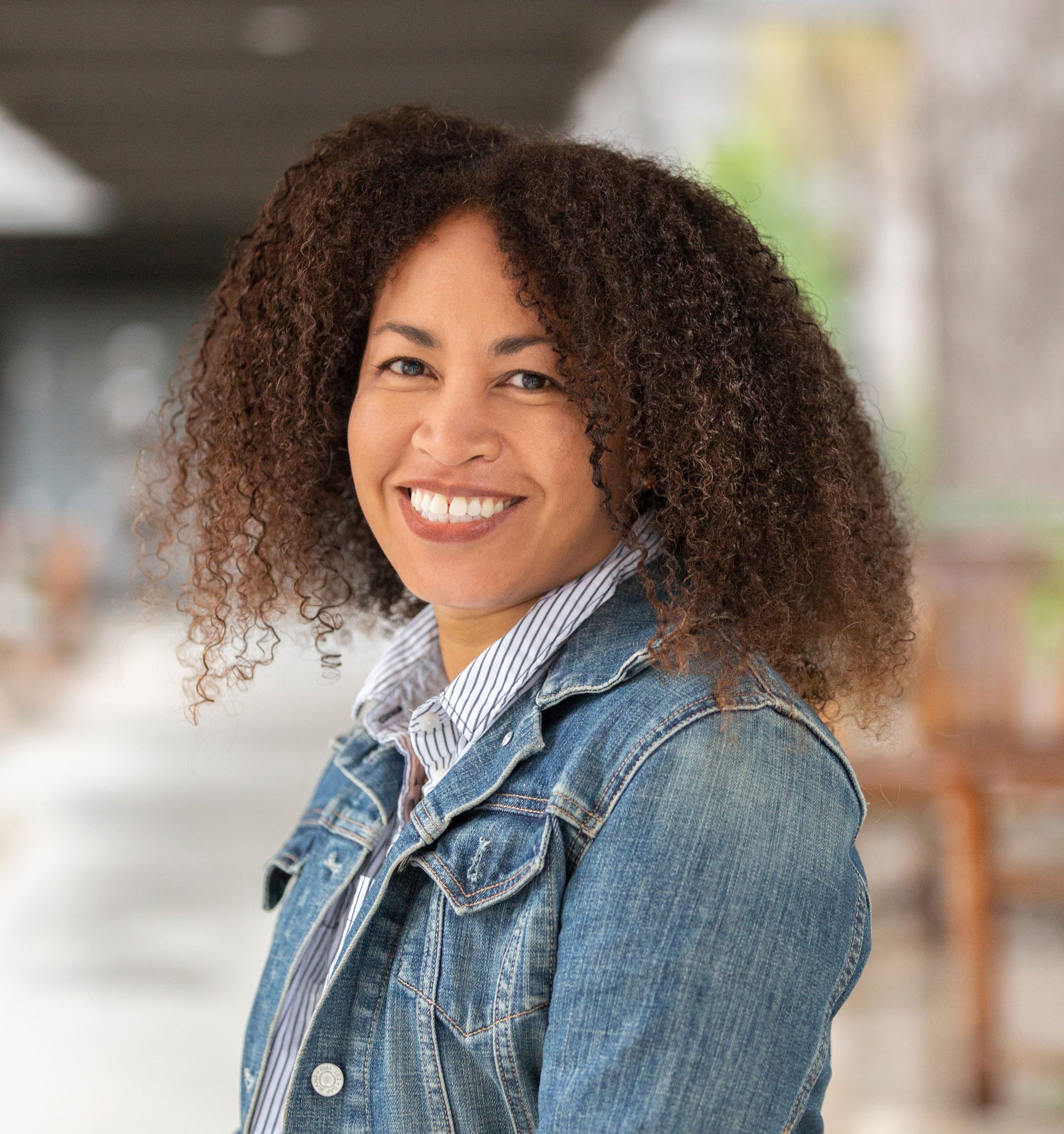 Larissa: I had been illustrating work for hire picture books with Simon & Schuster and Nickelodeon for years before I was able to gain representation by a literary agent.

Unfortunately, finding someone to represent me took a lot longer than I had thought it would. I was trained as an animation artist, and having worked on storyboards and character design, and having illustrated ten books, I thought developing my own work would be simple.

But it took some time for me to find my voice as an illustrator. So much of the work I had done was for licensed properties. I had to develop my own style. I had to learn the difference between creating a layout for an already recognized world of characters like the Rugrats was different when it came to developing the world for our own characters.

We had self-published two books together but really wanted to have our future books put out by an established publishing house.

My search for an agent lasted several years. We had to find an agent that would represent Keith and I as an author/illustrator team. When Rachel Orr of Prospect agency offered us representation, we were over the moon. We knew that we could finally begin devoting our creative lives to developing projects that would be brought to the market.

As we developed our stories, Clyde was shopped to a number of publishers, one of which had passed after asking us to develop it into a series. But Renee Hooker of Penguin Workshop picked it up as a 4-book series and we began crafting stories that were suitable for young readers. 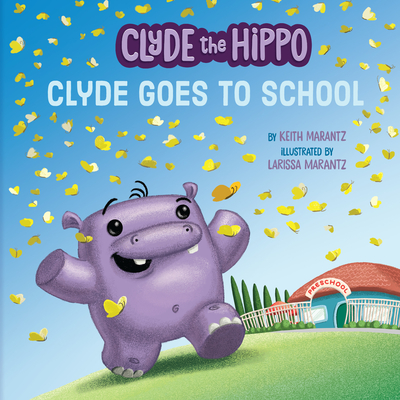 Please describe your illustration apprenticeship. How did you take your art from a beginner level to publishable? How has your style evolved over time?

I was a fine art major in college but started studying animation my last year in school. Once I was working in the animation industry, I transitioned to working on illustrated picture books for Nickelodeon. I needed to develop my own style, though, so I studied tons of picture books and continued working on my own to develop my skill. I started working digitally fifteen years ago and that took even more time to develop a style that worked, since I was trying to do two things at once.

I took an online course with Dr. Mira Reisberg and the Children’s Book Academy. During that course, I put together a story idea and developed a dummy, while learning how to strengthen the skills I already had but refine them for the picture book market. I worked digitally in that class and developed some strong portfolio pieces in Photoshop. Working digitally finally clicked when I made a pastel brush for photoshop that worked just like a real pastel pencil on paper. 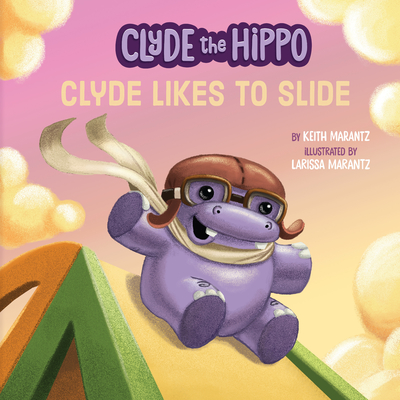 I finally understood that I needed to be utilizing my digital medium the same way I learned traditionally.

I think that’s when my work started to get noticed and that’s what ultimately led to becoming represented. I used that same pastel bush in my illustrations for all my Clyde books and it’s my favorite digital tool to this day.

What advice do you have for beginning children’s illustrators?

Read tons of picture books. Check out the maximum number of books from the library and get the books that you love to look at. Notice what it is about the work that you like and what is it about any of the work you think you could incorporate in your own work. Be aware of the styles that don’t appeal to you and figure out why they’re not interesting to you. Identify the types of things you absolutely love to draw and paint, and figure out how you can uniquely create those things with your own take on it.

Take courses to improve your knowledge. Seek out mentorships where available. Join critique groups so you can get another set of eyeballs on your work and learn to how to grow from a critique.

Get gestural with your sketches of characters. Learn to breathe life into your poses and develop expression poses of your characters so that they can tell your stories better. Keep a sketchbook and draw your random ideas in it, whether it’s story ideas or character ideas. I’ve used old drawings in my sketchbooks before and developed them into portfolio pieces.

And if you can leave your viewer with an emotional impact from looking at your art, that intrigues them to learn more about your character, then you are on your way. 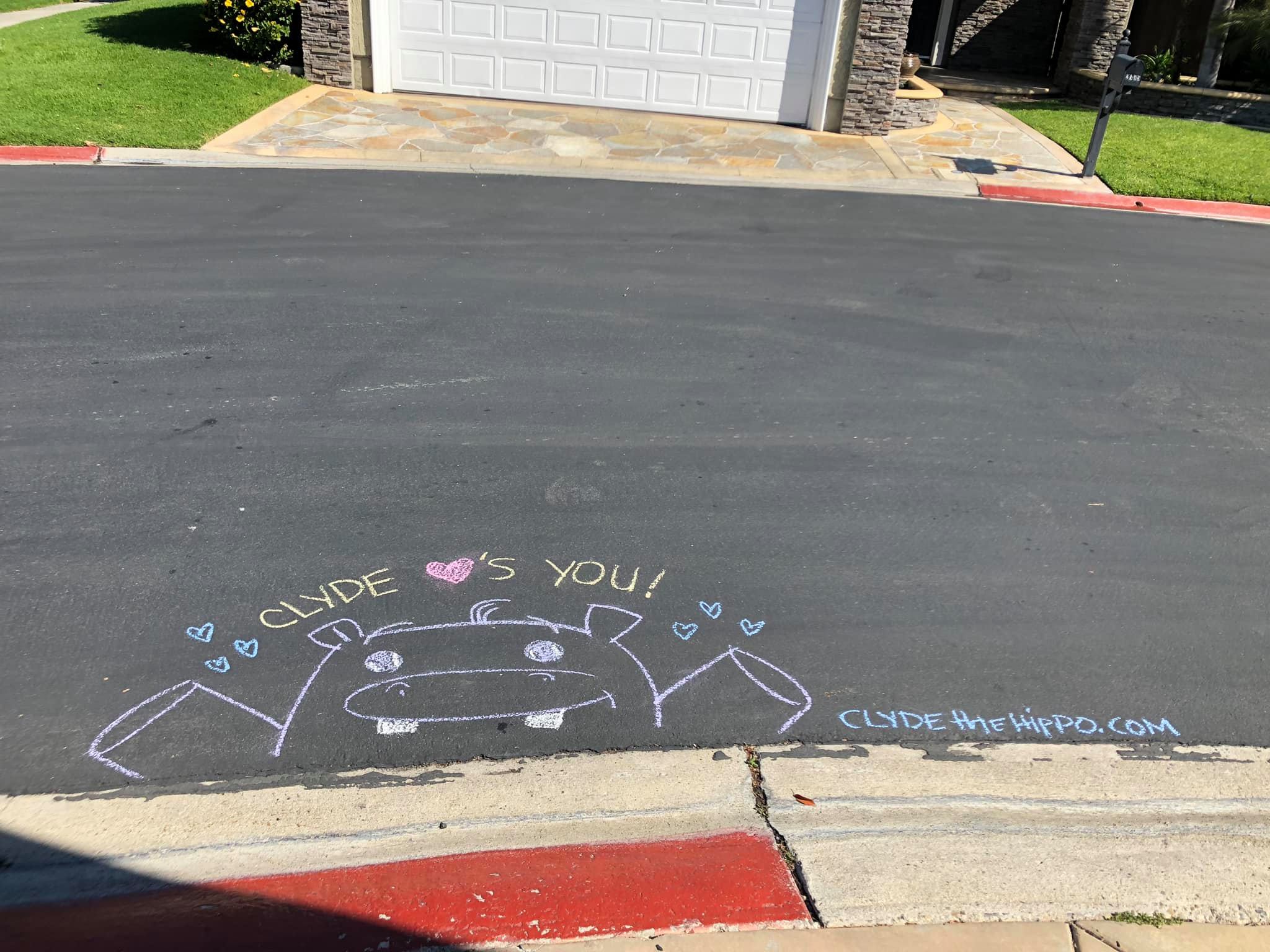 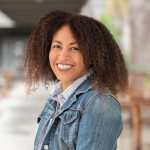 Illustrator Larissa Marantz began working as a Character Designer for Nickelodeon’s Rocket Power and Rugrats TV shows. Her picture book illustration career started when she left the animation studio to stay at home and raise her young children. In between numerous play dates, and hundreds of diaper changes, she illustrated almost a dozen books for Nickelodeon’s licensed properties. For 15 years, she’s taught art classes to thousands of children through her after-school enrichment program, OC Art Studios.

Larissa has been an adjunct faculty member of the Animation and Illustration departments at Laguna College of Art + Design for 12 years. She meditates and practices yoga to keep her monkey mind at bay, enjoys coffee every morning, and loves eating all the delicious meals and desserts made by her husband and creative partner, Keith Marantz. 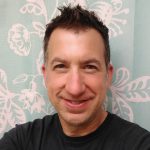 Keith Marantz loves writing for children. His ever-flowing inspiration comes from his own three. They serve as his idea-proving grounds and are also his toughest critics. Keith loves visual humor but, sadly, can’t draw his way out of a paper bag. Fortunately, his wife, Larissa, can. She is the other half of the Marantz dynamic duo that takes his ideas and turns them into amazing kid-lit art.

Keith is the author of an upcoming epic science fiction graphic novel entitled Blake Laser that will be illustrated by Larissa and published on HarperCollins in 2022. When he’s not taking care of his two pet ducks, Keith enjoys zooming around town in his 1979 Mazda RX-7.