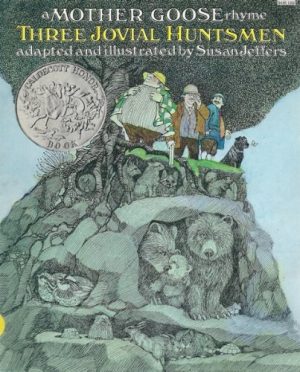 Jeffers studied art at the Pratt Institute, then worked in the children’s art department at three different publishing houses.

Working on other illustrators’ books inspired her to create her own. “…in 1968, Jeffers began an art studio with fellow illustrator Rosemary Wells, where they largely did book and jacket design,” wrote Shannon Maughan in Publishers Weekly.

In a 2013 interview, Jeffers’ told Equitrekking her first assignment to illustrate an entire book taught her a valuable lesson.

“If you don’t love the story, don’t do it. It took forever to complete, and I was miserable the whole time. It was not a success on any level.”

After her second book failed to earn money, she returned to jacket design. She next began work on Three Jovial Huntsmen, a public domain poem, but it was challenging as well. “I did the drawings for it, and they were not successful. The publisher and I went to press, and there we decided not to publish because it did not look good enough to promote,” Jeffers told Equitrekking. She even gave up publishing and went to work as an art teacher.

A year later, the publisher contacted her about trying again.

“It is amazing what stepping back from a problem can do. I started again and the book fell into place,” Jeffers wrote.

Three Jovial Huntsmen won the Pomme D’Or Biennale from Bratislava as well as the Caldecott Honor.

Jeffers would eventually go on to publish more than 47 children’s books, according to the Sno-Isle Libraries. McDuff Moves In, written by Rosemary Wells, was reissued in a new edition by Gryphon Press in 2019. Wells and Jeffers collaborated on many books. Wells shared this remembrance with Publishers Weekly:

“We worked together, always trying to compensate for the other’s weaknesses and to amplify the other’s strength. It worked so well. We shared many a book and 45 years of friendship. Susan’s legacy is her wonderful library from Hitty to McDuff and many more. All of them have been in the hands of thousands of children and they have benefited. What a terrific life!”

In a 2011 interview with Kathy Temean, Jeffers described her approach to illustration and outlined her process.

“Illustrating a book takes me a very long time, usually a year. In the case of The Nutcracker (HarperCollins, 2007), it took three years. So I want to be sure I am going to love the story for a long time. I have to remain enchanted by the characters and deeply moved by the point of the story from the beginning. This is a big demand.”

Gayleen Rabakukk holds an MFA in Writing for Children and Young Adults from Vermont College and is a former Writing Barn Fellow.

She’s worked with Cynthia Leitich Smith as a Cynsations intern since 2016 and also serves as assistant regional advisor for Austin SCBWI.

Gayleen is represented by Andrea Cascardi of Transatlantic Literary Agency.