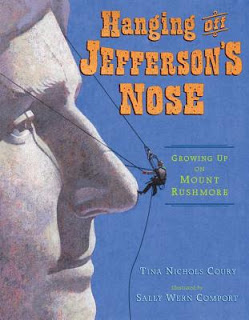 Tina: What was the initial inspiration for Hanging Off Jefferson’s Nose: Growing Up On Mount Rushmore by Tina Nichols Coury, illustrated by Sally Wern Comport (Dial, 2012)?

Little did I know that homework, a funeral and a famous stained glass window would begin a journey towards publication that would last almost eighteen years.

Here’s how it happened.

In the mid-nineties, I attended a funeral for an elderly neighbor at Forest Lawn Memorial Park, a very old cemetery in Los Angeles, renowned both as the resting place of movie stars and the home to many fabulous pieces of art.

I had planned to bury myself at the local library after the service to search for an idea for a project I needed to do for a children’s writing class I was taking. But I had never seen the stained glass window of Leonardo da Vinci’s “Last Supper” that Forest Lawn is famous for, so I decided to take a quick hike up to the Grand Mausoleum to see it before I left.

In the Court of Honor, the stained glass window took up one whole side of the mausoleum. Along with the select group of the rich and famous who were spending eternity under the window, I discovered something surprising: a small relief of Mount Rushmore tucked away on a lower corner of the wall. The names of Gutzon and Mary Borglum were etched below.

What was Mount Rushmore doing there with The Last Supper, and who were the Borglums? I knew immediately that I had found a subject for my class project.

Later, at the library, I found the research about the sculptor Gutzon Borglum and the construction of Mount Rushmore fascinating. And in all the stories of the creation of the monument, one interesting fact came up again and again: the sculptor’s son, Lincoln, had been with his father every step of the way.

I brought two different book ideas into class the following week. One was the building of Mount Rushmore; the other was the story of the sculptor’s son. The feedback from my instructor and my classmates was unanimous. Everyone felt I should concentrate my efforts on writing about the son, Lincoln Borglum.

Tina: What was the timeline between spark and publication, and what were the major events along the way?

I am a trained artist, and writing for children was a new skill to learn. For ten years, I took classes and joined critique groups and worked on this story. At one point I put the manuscript in a drawer for two years.

Then at my local SCBWI Writer’s Day in 2005, editor Mark McVeigh of Dutton (now an agent), who had critiqued my manuscript, asked to acquire it.

Then for the next seven years the book went through two editors, three release push-backs and a house reorganization that moved the book from Dutton to Dial.

It took over seventeen years from that day in my children’s writing class to have a published book in my hand!

Tina: Dutton first acquired your manuscript in fall 2005. You were half way through the editing process when your first editor left Dutton back in early 2008. Then the manuscript was assigned to Steve Meltzer. What was your first impression of Steve?

My first impression was relief. I had heard horror stories about orphan picture books going to editors who only worked in YA. Steve was a senior editor and had worked in publishing for years. He wrote me a friendly email saying he looked forward to working together. I asked him to be interviewed for my blog and he agreed. I immediately loved him for that.

Steve: You hadn’t acquired Hanging Off Jefferson’s Nose. But you were assigned it after the original editor left the house. What was you first impression of the manuscript and of Tina?


I love nonfiction. I feel that I am a very lucky to make a living reading history. So when my publisher offered me the chance to take on this project, I was thrilled.

I thought that the story of a boy who finishes his father’s dream in creating a sculpture from a mountain was operatic.

Tina’s manuscript was incredibly good. It was a rare example of the editor not having to do much editing. I think Tina was a little surprised when she read my short editorial letter.

Steve: How did you and/or the art director come to match Tina’s text with Sally’s art?

The credit for that goes to the book’s original editor, Mark McVeigh and art director, Sara Reynolds. All I can say is it was a wise choice. I joined the project after Sally had been signed up. It was a real treat to be able to work with her since she is very selective about projects. Sally used a style that had a ’60s nostalgic feel but with very modern updates. Very folksy, which truly matched the text.

Tina: The book release date was pushed back one than once. What did you do to promote your under-contract but still unpublished book during that time?

I fell into blogging early in 2007 and my blog, Tales From the Rushmore Kid, gave me a platform for my unpublished book and a voice in the children’s writer’s community. I work hard to get interesting content from agents, editors and authors. Many have given me interviews, including Susan Patron, Sherman Alexie and Neil Gaiman.

In 2008, my husband, legendary record executive Al Coury (pictured below), received a lifetime achievement award from a heritage foundation in D.C. I didn’t like the video production company they were using for the honorees, so my control-freak self decided to learn how to make one. It was a big hit at the event, and the confidence I gained led me to a produce a new cyber promotional tool, the book trailer.

In 2010, I wrote an article for Children’s Writers and Illustrator’s Market on “Book Promotion: From Blog Tours to Book Trailers.”

Also in 2010, I applied for and was accepted on the faculty of the SCBWI Summer Conference. That was a dream-come-true for me.

Tina: What advice would you give fellow writers on how to get published?

If you haven’t done so, join the SCBWI. Everything you need to get published is in this organization. Presentations on craft, critiques and workshops will hone your manuscripts. The focus is always on the quality of the manuscript. Many editors and agents critique for SCBWI events, and it is a great way to get your manuscript noticed.

Today you need a body of work to get an agent and agents are the new readers, so make sure your manuscripts are perfect before submitting to one.

Start blogging and commenting on kidlit blogs. There is tons of information out there, and it’s a wonderful community.

Think twice before you self publish, though it is cheap and tempting. At one stage, I thought about doing it, but I am glad I took the traditional route. It is easy to lose all perspective on one’s manuscript. It was a difficult journey to publication but it has been a collaborative one.

I had the creative force of two editors, art directors, designers, an illustrator, two copy editors, a publicist, and a marketing and sales staff. I can’t imagine what the book would have been like if only I wore all those hats.

Tina: What advice would you give mid-list authors on promoting their books?

Authors can do an amazing amount. Do one hour each day of cyber
marketing. Besides Facebook and Twitter, it is important to blog.
Blogging brings up your Google numbers. Do an Anniversary Blog Tour of
your book. Research a new audience for your tour.

Unlike
a new release that relies on book launches, signings and hype, backlist
books need to tap into a whole new audience, and the web is full of
opportunities. Surf the web for blogs that feature festivals, reviewers
or producers of your “hook.” All books have a hook, whether it is
apples, cowboys or teen romance.

Do a book trailer and
kick off your tour with it. Book trailers are fairly new and most
backlist books don’t have them. If you do have one, there is no law
not to have another. The more cyber information out there, the better
for your book.

Steve: What suggestions do you have for mid-list authors interested in working on their own and with their publisher to best promote their book(s)?

Go anywhere and everywhere to promote your book. Be it a library, classroom, bookstore, online…anywhere. Make something fun for giveaways so that people will remember you. Write articles for any magazine, newspaper or blog to promote your work. Do it all for free, in the end it will pay off.

Tina: Name one thing you learned from Steve.

Lots about writing and revising, of course, but the thing I most appreciate was learning that being friends with my editor is just as important as being colleagues.

Bleeding over revisions and dealing with the publication pushbacks was so much easier to handle with my buddy, not just my editor, to hold my hand.

Steve: Name one thing you learned from Tina.

Besides an incredible Paul McCartney story?

However, she is incredibly generous as a friend; even offering to take on mom responsibilities when it looked like my daughter was going to take an internship in LA. Luckily, she dodged that bullet.

She is just great and has a bright writing future ahead of her.

Enter for a chance to win one of five first-page critiques from Penguin editor Steve Meltzer. Picture books through YA. Fiction or nonfiction. Eligibility: international.

Tina Nichols Coury is an author, award-winning multi-media artist, blogger, vlogger, producer of book trailers and all around Renaissance woman. In character as “The Rushmore Kid”, she visits schools across the United States to present her popular “Why I Love America” program.

Tina currently lives and works on the beach in Oxnard, California with her husband Al, their Doberman, Honey, and the Keyboard Kitties, Toulouse and Monet. Don’t miss her blog, Tales from the Rushmore Kid.

Steve Meltzer has been in publishing industry for over 25 years and has served in a variety of positions and has been on many committees.

Steve also is an adjunct instructor at New York University.