Julie C. Dao on Fairy Tales, Romance & Her Latest YA Novel by Karis Rogerson from We Need Diverse Books. Peek: “‘Looking back, I see now how every rejection and roadblock happened for a good reason,’ she said, saying she would tell a younger, querying version of herself to be patient. ‘Most of us want the dream of publication to happen instantaneously, but it doesn’t come to you just because you want it.’”

Interview: Bill Konigsberg at TTBF by Xander Christou from BookPeople Teen Press Corps. Peek: “I walked in there and saw a whole room full of books about people like me…I really do think those first books I read saved my life, just beginning to understand that I wasn’t alone because I was sure I was the only person like me, and I wasn’t.”

Illustrator Saturday–Aris Falengos aka Azbeen by Kathy Temean from Writing and Illustrating. Peek: “I think the biggest hurdle is to just accept yourself. Every artist already has their own style (which naturally changes over time), but they would like it be something else than it is, so they go an a long journey trying to discover something that is already there.”

Tap the Transformative Power of Stories to Build a Kinder World by Kimberly Rues from EdSurge. Peek: “Imagine the power of story that transports us into the shoes of a young Black man—complete with the challenge to infer what he might be thinking, feeling or intending. Or a tale that shows us the life of an immigrant, again with the potential to show us her thoughts, feelings….”

Interview with Weshoyot Alvitre–Artist/Illustrator by Carole Lindstrom from The Bull Horn. Peek: “It wasn’t until I met Michael Sheyashe and Lee Francis did I feel comfortable even discussing that side of my heritage through the comics medium. Now, it seems all the major publishers are putting call outs for Native American and Indigenous centric media.”

Jason Reynolds is on a Mission by Concepción de León from the New York Times. Peek: Writing for Black children first and foremost, Reynolds attempts to portray the scope of their lives — sometimes including guns and violence but also happiness and laughter. “You don’t go through what Black and brown people have been through in this country and survive without understanding how to tap into joy.”

We Need Diverse Editors by Kacen Callender from Publishers Weekly. Peek: “To publish more diverse lists across the board, including science fiction and fantasy, publishers need to hire diverse editors who might relate to and connect with more diverse stories, so that they can help to put those much-needed books into the world.”

Food Brings Families Together In “Fry Bread” by Graham Lee Brewer from NPR. Peek. “Being Indigenous in America is largely based on tribal citizenship, not simply race….Maillard also wants non-Native students to learn from the book…Things like colonialism, tribal sovereignty and how fry bread is not a traditional food source—instead, one born out of forced removal.”

Middle Grade Is Too Young, YA Too Old. Where Are the Just-Right Books for Tweens? by Katy Hershberger from School Library Journal. Peek: “For students around ages 11 to 14, middle grade titles aren’t always a good fit. The terminology can be confusing—middle grade doesn’t equal middle school. Most middle grade books are designated by publishers for ages eight to 12, while middle school students range in age from 10 to 15.”

Money to Write By: A Brief Guide to Grants for Writers by Jeanne Kisacky from Writer unboxed. Peek: “[G]rants for writers…are out there. This post is a mini-introduction to strategies for finding, selecting, and applying for money to write by. Grants for writing won’t make you rich or give you a cushy life, but they might give you the quiet time you need to finish the critical work.”

A Peek Into The Process: Author Caroline Fernandez & Illustrator Shannon O’Toole by Debbie Ridpath Ohi from Inkygirl. Peek: [T]he story is interactive and the reader becomes part of the story. How I approached this was to have the characters engage with both the reader as well as the other characters on the page. This process involved a series of thumbnails in black and white, and some in colour.”

HarperCollins Partners with The Sun in Free Books for Schools Campaign by Katy Docherty from The Bookseller. Peek: “HarperCollins and newspaper The Sun have partnered up to hand out two million free books to school children across England, Wales and Northern Ireland. The Books for Schools campaign will offer 20,000 primary schools packs of 106 books with downloadable teaching resources….”

Scholastic Kids Press Announces 50 Kid Reporters to Cover “News For Kids, By Kids” During 20th Anniversary Year from The Children’s Book Council. Peek: “As they work closely with an editor throughout the school year, Kid Reporters receive valuable, hands-on journalism experience pitching stories and doing interviews. They build confidence and sharpen their communication and critical-thinking skills….”

PAMA Panel: Connecting Diverse Books with Diverse Audiences by Sarah Yung from Publishers Weekly. Peek: “[T]he U.S. will soon become a majority-minority nation. The 2018 U.S. Census Bureau estimates show that fewer than half of American children under the age of 15 are white, making Gen Z more racially diverse than millennials and older generations….‘We have to think about who we’re acquiring, as well as who’s on staff….’”

A Game Plan for How to Nail Your Next Reading by Gigi Rosenberg from Jane Friedman. Peek: “Two Weeks Before: Have a Rehearsal…in front of at least one friend. Warning: You may resist this….You want to rehearse with someone who inspires confidence, who can tell you what you did well and who can give you suggestions that leave you feeling motivated, not devastated.”

Young Readers Unite at WNY Children’s Book Expo by Benjamin Joe from Niagara Frontier Publications. Peek: “The meat of our whole event is ‘KidsLit Week,’ because it’s where we can really see the most amount of children and impact lives right in the school setting….We have a captive audience. Everyone just embraces this opportunity and, for many, it’s a first-time experience.” The event takes place Nov. 9 at the Buffalo Niagara Convention Center.

ALA Offers Hour of Code and 2020 Census Mini-Grants from American Library Association. Peek: “In advance of Computer Science Education Week (CSEdWeek), an annual event to get students excited about coding, ALA is opening a call for applications for $300 mini-grants to school and public libraries to facilitate an Hour of Code activity for youth using Google’s CS First Hour of Code activity.”

Imagination Library Supplies 5,000 Children with Free Books by Mary Dennehy from Echo.ie. Peek: “Around 63 percent of children under five who live in Dublin 24 are now signed up to a free book programme, with 28,000 books delivered to nearly 5,000 local kids…Last February, Dolly Parton’s Imagination Library was launched in Tallaght, with each of the 4,800 children signed…receiving a free, high-quality book every month.”

2019 Writers’ League of Texas Book Awards Contest is now open to Texas authors of books published in 2019. Submissions will be received through March 10, 2020. Submission categories include Middle Grade/YA books and Picture Books. 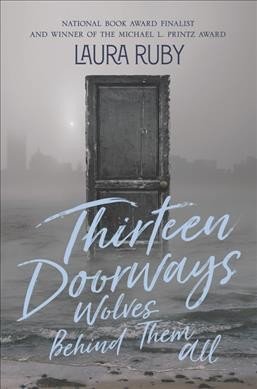 , hosted by the National Book Foundation, will take place in New York City on Nov. 20, at the 70th National Book Awards Ceremony and Benefit Dinner.

Shout out to the five finalists in the Young People’s Literature category, especially Laura Ruby, author of Thirteen Doorways, Wolves Behind Them All (Balzer + Bray).

SCBWI’s On-The-Verge Emerging Voices Award is accepting applications until Nov. 15. Peek: “Any writer or writer/illustrator from an ethnic and/or cultural background that is traditionally under-represented in children’s literature in America. (Including but not limited to: American Indian, Asian, Black or African American, Hispanic, Pacific Islander).”

November is Read Across America’s “Grow Gratitude Month,” and my latest YA novel, Hearts Unbroken (Candlewick, 2018), is the Teen Book of the Month. The featured picture book is We Are Grateful: Otsaliheliga by Traci Sorell, illustrated by Frané Lessac (Charlesbridge, 2018), and the featured middle grade book is The Hero Next Door, edited by Olugbemisola Rhuday-Perkovich (Random House, 2019), which includes my short story, “Girl’s Best Friend.”

New Board of Advisors Member Cynthia Leitich Smith from Austin SCBWI. Peek: “SCBWI offered professional guidance, a clear sense of direction for my dream. In addition to the craft development and career information, the organization also provided a nurturing, supportive community.”

Expand Native American Curricula Beyond Thanksgiving Myths by Lauren Barack from Education Drive. Peek: “Generalizations tied to the holiday don’t paint the whole picture of the numerous cultures that were spread across the Americas.” See also Native Heritage Month Books & Resources from The Horn Book.

SCBWI Student Writer Scholarship is open for applications from full-time university students in an English or Creative Writing program until Nov. 20 for the New York Winter Conference.

The SCBWI Winter IPOC (Indigenous or People of Color) Women’s Scholarship is accepting applications for the all-expense paid trip to the SCBWI New York Winter Conference until Dec. 5.