Recently, someone commented to me that writing fantasy must be easy, since I can just make up what I need to fit my plot.

I wish! As Lloyd Alexander said,

“Once committed to his imaginary kingdom, the writer is not a monarch but a subject.”

To me, world building is both the hardest and the most wonderful part of writing fantasy. But what may surprise some people, is that I, like most fantasy writers I know, do quite a bit of research in creating that world.

Uncharted (Page Street Publishing, 2018), my contemporary fantasy, was actually inspired by an old Irish legend, told to me by my mother.

My mother was what people often called “a character.”

She grew up very poor and left school after sixth grade to help her parents with her very large family (she had ten siblings). 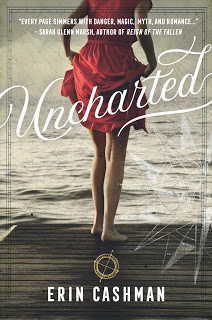 When her chores were done, she loved to spend her time on Galway Bay where she was fed a steady diet of myth and legend. Even as an adult, she believed in all of it – ghosts, premonitions, kelpies, fairies, changelings, angels, Sea Maidens, etc.

One day when we were walking on a Cape Cod beach, watching the morning mist swirl across the water, she recounted a time when she saw an island suddenly appear through the fog off the coast of Galway.

A fisherman told her that island was the legendary island of Hy-Brasil, visible only once every seven years, where time passed at a different rate, and people lived forever.

Years later, after my mother had died, I was researching Irish mythology and I came upon a reference to that same mythical island.

Intrigued, I started reading about Hy-Brasil, and I was surprised to find that it appeared on maps from 1325 through the mid-1800s with numerous people claiming to have gone there.

The legends surrounding the island were fascinating as well: it was shrouded in fog, it only appeared once every seven years, the roads were paved with gold, the Fountain of Youth was located on the island, it was home to an advanced civilization, and it was an earthly paradise.

In 2016, the Boston Public Library had an exhibit on Hy-Brasil that I couldn’t resist going to, and I was fascinated to see the old maps!

The more I researched, the more real the story became in my imagination. I made a rough outline and got to work writing. Throughout the process of writing and editing Uncharted, I referred to my research, and did more research.

I had hand-drawn maps, posters, printouts, a Pinterest board and a three-ring notebook.

The hours and hours I spent researching—when I could have been writing—were hours well spent. Not only did the world became fully realized, the different things I read inspired subplots, helped me to shape the characters, and added complex layers to the story.

Beyond inspiring the mythology of Uncharted, my mother was also the inspiration for Annabeth, the main character.

My mother was one of the strongest people I’ve ever known, but she was simultaneously plagued by bipolar disorder, depression, and fear.

Her phobias became so bad that she was hospitalized, and like Annabeth, she was treated with electroconvulsive therapy. This also required quite a bit of research, including discussions with people in the field of mental health, and my family members.

An unexpected benefit was that I realized, in writing Uncharted, how strong my mother was. She refused to let her illness define her even though it was part of who she was. She had to learn to accept all of herself, all of the good traits as well as the trials and hardships of mental illness.

I’m a very visual writer, and the research I do for each book really helps me to create both the world and the characters in my head, and more importantly, on the page!

If you need help bringing your fantasy world to life, try research. It will add depth and layers to your story and may even spark your own imagination.

Erin Cashman writes YA fantasy. Her first book, The Exceptionals, was selected as a Bank Street College of Education best book of the year. She is also the 1st 5 Pages Workshop coordinator, and a permanent mentor. She lives in Massachusetts with her husband, three kids, and an energetic rescue dog. Follow Erin on Twitter, Instagram, Facebook, Pinterest, and Goodreads.