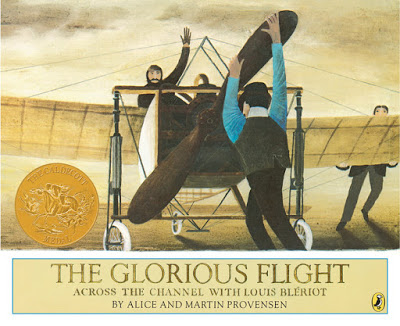 Alice Provensen, a Star in the Children’s-Book World, Dies at 99 by Neil Genzlinger from The New York Times. Peek:

Working with her husband, Martin, Alice Provensen created dozens of books for young readers. “The books they illustrated and wrote covered a wide range — educational, fictional, biographical, historical. They liked to travel to research them, and did so for the most acclaimed book they both wrote and illustrated, The Glorious Flight: Across the Channel With Louis Blériot July 25, 1909 (Viking, 1983)… It won them the prestigious Caldecott Medal in 1984.”

According to the Publishers Weekly obituary by Shannon Maughan, both the Provensens were “fascinated by airplanes and airshows.”

In 2001 Alice talked with Leonard Marcus for A Collaborative Effort in Publishers Weekly, about sharing that lifelong fascination with young readers through Blériot’s story. Peek:

“A friend sent research materials from France…and an antique airplane museum and flying school called the Old Rhinebeck Aerodrome had opened in a town not far from their farm. Alice and Martin enjoyed attending the weekend air shows…. Martin was also taking flying lessons there.”

The Provensens won a Caldecott Honor in 1982 for A Visit to William Blake’s Inn: Poems for Innocent and Experienced Travelers, written by Nancy Williard (Harcourt Brace Jovanovich, 1982). 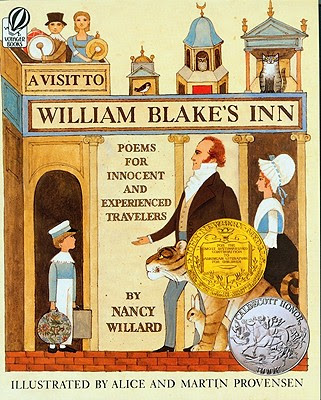 After Martin died in 1987, Alice wasn’t sure if she’d be able to keep working, but editor Linda Zuckerman encouraged her to keep creating. From Eureka! by Sally Lodge for Publishers Weekly in 2005. Peek:

“Working on this (Klondike Gold, Simon & Schuster, 2005) and other books, I’m not ever really alone. I always feel as though Martin is looking over my shoulder, telling me what I should do over—and letting me know what work is good.”

“I know Alice has always credited me for getting her back to work, but she couldn’t have known the enormous satisfaction I felt on seeing the bound books of The Buck Stops Here (HarperCollins, 1990/ Viking 2010) for the first time. I learned a lot from her and I will miss her.”

“For children who love their dogs, hate long car rides, and fear the new and different (until they try it), much will be comforting in this unassuming, appealing tale.” 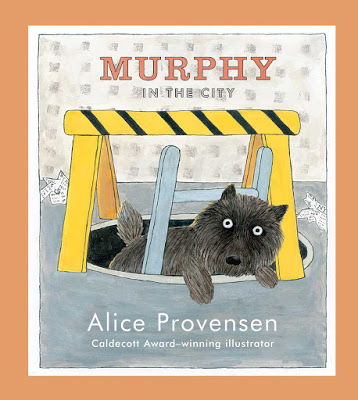 Illustrator Leif Peng details the Provensen’s work on the ad campaign in his 2009 post, The Provensens & Tony the Tiger, including a quote from their nephew, Erik Provensen. Peek:

“They invented Tony the Tiger, and Katie the Kangaroo for Kelloggs, I should know, I, and my little brother in the early 50s were part of a children’s group brought together to access which charters we liked best. Tony and Katie were the winners.”