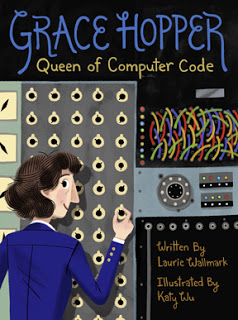 
Grace Hopper coined the term “computer bug” and taught computers to “speak English.” Throughout her life, Hopper succeeded in doing what no one had ever done before.


Delighting in difficult ideas and in defying expectations, the insatiably curious Hopper truly was “Amazing Grace” . . . and a role model for science- and math-minded girls and boys.


I think it’s important to write about our passions, and I love STEM (science, technology, engineering, math).

I’m also passionate about making sure that all children, regardless of race, religion, nationality, sexual orientation, etc., realize that they can become scientists and mathematicians. By highlighting the achievements of woman in these fields, I’m showing both girls and boys, that you don’t have to be male to be a computer scientist like Grace Hopper.


I knew about Grace Hopper and her many accomplishments, but never realized how personable and funny she was. While researching the book, I watched many videos of her, and she always made me laugh.


The standard advice for those starting out is to read extensively the types of books you want to write. But, as Vermont College of Fine Arts (VCFA) taught us, it takes more than a surface reading to understand what goes into making a good book.

You have to study and practice the craft techniques before you’re able to include them in your own writing. 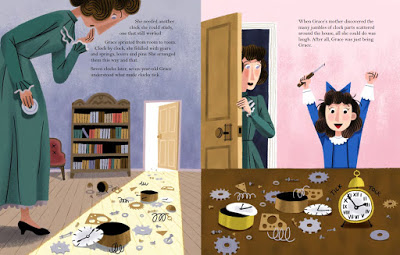 
Although I teach at the college level, my day job helps hone my ability to make sure my audience truly comprehends what I’m teaching. The instant feedback of a classroom setting lets you know when you’re on the right track.

If I’m not clear in my writing, I hear that imaginary student, now a seven-year-old, saying, “I don’t get it.” In STEM nonfiction books at the picture book level, you need to make unfamiliar and difficult ideas understandable to an elementary-school child. 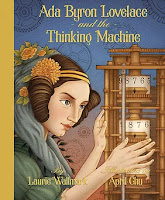 My critical thesis for my MFA was on how to explain complex STEM topics in picture books. In my studies, I discovered many possible techniques to use.

In Grace Hopper, I chose to describe how a compiler works rather than use the technical term. “(Her program) translated MULTIPLY and the other commands into instructions the computer could understand.”

In Ada Lovelace and the ThinkingMachine (illustrated by April Chu, Creston Books, 2015), I gave a technical word and immediately defined it. “Ada decided to create an algorithm, a set of mathematical instructions.”

As an MFA graduate, how did that experience impact your literary journey?


I workshopped this book twice while I was at VCFA. The first time, it was written in verse. Doing this allowed me to include much more detail than is usual in a picture book.

That was the positive. The negative? It just wasn’t working. I rewrote the story in prose and brought it back for another workshop. The comments of faculty and my fellow students helped me find my way to the final book.

I’m pleased that one of my poems remained as part of the published book. 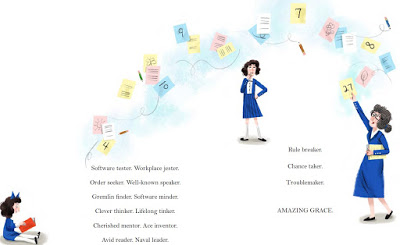 Laurie Wallmark has an MFA in Writing for Children and Young Adults from VCFA. When not writing, she teaches computer science at Raritan Valley Community College.


Discussion and curriculum guides are available for both of Laurie’s books.