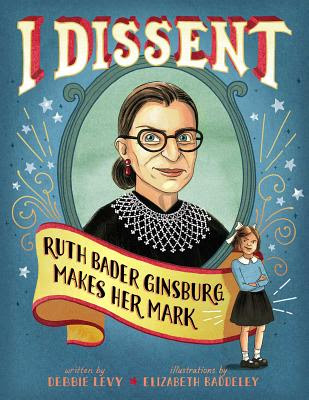 We welcome author Debbie Levy to talk about her new picture book biography.

From the promotional copy of I Dissent: Ruth Bader Ginsburg Makes Her Mark, illustrated by Elizabeth Baddeley (Simon & Schuster, 2016):

Ruth Bader Ginsburg has spent her lifetime disagreeing . . . with creaky old ideas. With unfairness. With inequality. She has disagreed. She has disapproved. She has objected and resisted.

Ruth Bader Ginsburg has changed her life, and ours, by voicing her disagreements and standing up for what’s right. This picture book about the first female Jewish justice of the U.S. Supreme Court shows that disagreeing does not make you disagreeable and that important change can happen one disagreement at a time.

Welcome to Cynsations, Debbie! We’re both graduates of The University of Michigan Law School. Did you practice law or go straight to writing for young readers like I did (or rather like I did after clerking)?

I did practice law for several years after law school. But writing books for children is the only job I’ve held for more than six years. Lawyer at a big Washington, D.C. law firm: six years. Newspaper editor: six years. Then I took a class at the Writer’s Center in Bethesda, Maryland, with the excellent Mary Quattlebaum. (Check out her books, and her reviewing work!)

Writing for children: This was a vocation with long-term potential.

Hey, I have a newspaper background, too–so much in common! You write fiction and nonfiction across formats and age levels. Often I hear from new writers that they feel pressured to pick one focus. What has your range of pursuits done for you in terms of craft and career?

I think the writers you’re hearing from are telling a truth: There can be pressure to pick one focus or, to put it otherwise, to establish a “brand.”

I think I must have subconsciously scoffed at the notion that I could ever be a brand—ha, a Debbie Levy brand!—so, for better or worse, I’ve mostly followed my interests and allowed serendipity a role in choosing projects.

Also, one solution for writers who do want to be multi-focal is to have more than publisher. I realize that doesn’t solve a beginning writer’s problem, who may be looking for Publisher #1. But it is an option once you start getting published. 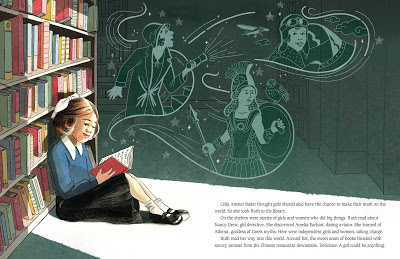 Thank you! Like many people, I knew that the Glorious RBG was the second woman to serve on the Supreme Court of the United States and the first Jewish woman on the Court.

I knew that, before that, she was a federal appeals court judge in Washington, D.C., and, before that, one of leading lawyers in the field of equal rights for women and girls.

What I didn’t know, until I started researching more deeply about her, is that she has been disagreeing with unfairness and with things that are just plain wrong from the time she was a little girl.

I mean, she objected to being excluded from shop class in grade school, and being required to take cooking and sewing instead! When on a car trip with her parents, she disagreed with she saw a sign outside a hotel that read “No Dogs or Jews Allowed.” Later, of course, she went on to disagree, resist, object, and dissent her way into big things.

And she’s been doing this for years with a voice that is not loud (people lean in to hear her words), in a manner that is not obnoxious (more benefit of the doubt than bashing, more insight than invective), and in service of justice.

So, I realized, the story of her life offers this inspiring lesson: Disagreeing does not make you disagreeable, and important change happens one disagreement at a time. Is it any wonder, then, that I thought she was a great person to introduce to young people in a picture book?

Agreed! Many of my favorite people disagree strongly with injustice. What were the challenges (research, psychological, logistical) in bringing the story to life? 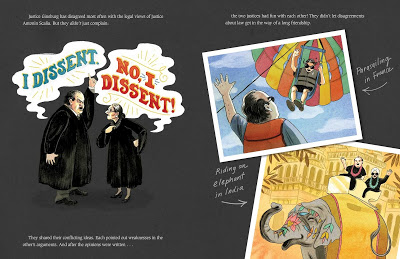 I feel lucky to live in the Washington, D.C. area, because although Justice Ginsburg didnot find time for an interview with me last summer when I was working on this book, she did grant me access to her papers on deposit in the Manuscript Division at the Library of Congress (practically next door to the Supreme Court!).

I’ve gone through at least one Manuscript Division collection before, but none like this. So tidy! Meticulous! Her speeches typed on 4 x 6 cards: impeccable! Her handwritten notes on yellow legal sheets discussing and advocating for the Equal Rights Amendment that never got adopted!

Although I didn’t absolutely need to read piles of drafts of legal briefs and memoranda, I dived into this stuff with gusto; you do get a sense of a person from their papers.

Oh, wait. You asked for challenges. It is a challenge to write about someone, a living, active person, without having an interview. But there were many, many print and video interviews of RBG for me to consult. Many scholarly articles, by and about her.

And she did review the manuscript last October. She sent a nice little note, and wrote in some handwritten notes in the margins of my typescript. I took all her edits!

She was a vibrant, ever-curious, outgoing woman, someone always interested in another person’s story, someone who as a girl dreamed of being a journalist (she ended up in the wholesale costume jewelry business instead), and she would have been over the moon to know that I was writing a book about RBG, to know that I was elbow-deep in RBG materials at the Library of Congress, to know that RBG looked over my manuscript pre-publication.

I’m answering your questions, Cyn, the morning after the book launch for I Disssent, which we held at D.C.’s great Politics & Prose Bookstore. Many friends who had known my mother attended.

I said there, “I cannot help but think that had my mother still been alive, she would have figured out a way to get me into RBG’s chambers for an interview—and she along with me!”

The room was filled with knowing smiles and laughter. Someone even called out my mother’s signature phrase: “Let me ask you a question”—her way of getting people to open up to her.

That helped with the pain of not having Mom there. (And, really, she would have snagged me an interview.)

Talk to us about disagreeing. It sounds like a negative focus for a children’s book. Is it? In either case, why do you think it’s important in the conversation of youth literature? 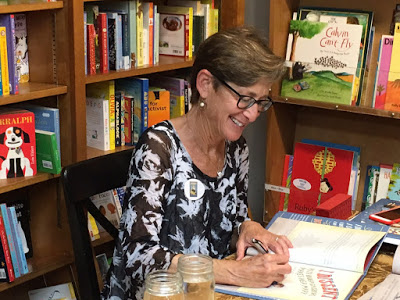 Yes, let’s talk about disagreeing! The theme of disagreeing is really what sold my editor at Simon & Schuster on this book.

From the very beginning, we were really excited about creating a book that said to all kids, and to girls in particular, that disagreeing does not make a person disagreeable, and that you can accomplish big things for yourself and for the world through dissent and by finding another way when the world says “no” to you.

At the same time, simply disagreeing without more isn’t really enough if you want to change your life or anyone else’s. On the back of the book, we’ve put this RBG quote: “Fight for the things that you care about. But do it in a way that will lead others to join you.”

Seems simple, right? But it’s that second sentence that is so hard to pull off.

Many authors discover reoccurring themes in their work? Is this true of you? If so, could you tell us about it and how I Dissent fits in?

I seem to return to the theme of Outsiderness. My mother, protagonist of the nonfiction-in-verse The Year of Goodbyes (Hyperion, 2010), being an outsider as a girl in Nazi Germany in 1938. Danielle, protagonist of my young adult novel Imperfect Spiral (Bloomsbury, 2013), who finds an unexpected antidote to her feelings of being the outsider in an unlikely friendship with the six-year-old boy she babysits one summer.

The African American individuals and communities, outsiders in their own country, in my nonfiction picture book We Shall Overcome: The Story of A Song (Disney-Jump at the Sun, 2013).

Today we may look at RBG and see the ultimate insider—she’s a U.S. Supreme Court Justice, for heaven’s sake! But she overcame the outsiderness of being a Jew in a sometimes hostile Gentile world, of being a young woman in the (then) overwhelmingly male-dominated world of law school, of being a female lawyer in a (then) man’s profession, and of being an advocate for legal and social changes that went against the grain of society’s traditional norms. There’s my theme. 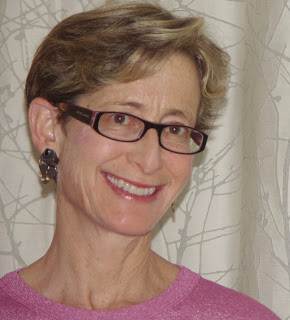 Other writers. What good communities and friendships I’ve found!

What do you do when you’re not writing or out-and-about in your author hat?

Think about whoever my next dog will be.

Apologize to my cat for thinking about my next dog.

You know, the usual.

In February 2017, Soldier Song, A True Story of the Civil War (Disney-Hyperon). An 80-page picture book for older children about a remarkable event that occurred after the Battle of Fredericksburg. Illustrated by the excellent, creative Gilbert Ford, with lots of room for excerpts from soldier’s letters and diaries. I’m excited about this!

One thought on “Author Interview: Debbie Levy on I Dissent: Ruth Bader Ginsburg Makes Her Mark”