Welcome, Alan Cumyn! What was your initial inspiration for Hot Pterodactyl Boyfriend (Atheneum, 2016)?

There’s a short answer and a long one. The short: in January 2012, popular YA author Libba Bray gave a speech to over a hundred writers at Vermont College of Fine Arts in which she brought us through the ups and downs of her writing career.

Three times in the course of an hour she said, “Don’t go writing your hot pterodactyl boyfriend novel.” She meant that we shouldn’t slavishly follow the trends. But I was struck by the phrase.

When I approached her afterwards and said that I was getting an idea, she encouraged me to follow up, and a little later the whole first chapter, in which the pterodactyl, Pyke, arrives at Vista View High in a calamitous fashion – by landing unceremoniously on the cross-country running champion, Jocelyne Legault – more or less fell out on the page for me. 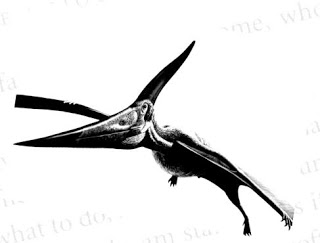 The longer answer takes me back more than ten years when I was riding a train from Toronto to Ottawa. I had been at some publishing event or other, and was full of the possibility of new stories.

The train rounded a bend and Lake Ontario came into sight. On a rock by the shore a great blue heron, which looked like an ancient creature, pierced me with his gaze. It was the oddest feeling – I felt locked in direct communication with an intelligence not only from another species, but from a vastly different time.

Seconds later the landscape changed, the heron was gone, but I pulled out my pad and scribbled furiously for several pages about a heron who is able to change into a man at will, and who wanders into the big city from time to time almost as a vacation from his usual existence.

After a time I stopped writing because I realized I didn’t know enough about herons to proceed. Over the years, I worked on several versions of this story, and got sidetracked with an interest in Kafka, whose “The Metamorphosis” (1915) famously envisioned a man who wakes up one morning transformed into a bug. I was drawn to the idea of introducing something startlingly unreal and fantastical, but continuing the rest of the story in as realistic a fashion as possible. I was also, like so many others, attracted by the dreamlike nature of Kafka’s writing.

The story morphed and became at least two entirely different novel-length manuscripts that sputtered for various reasons and never quite worked. And then: “Don’t go writing your hot pterodactyl boyfriend novel.” I was seized with yet another possibility to work with some of the same ideas and influences, and perhaps not take it so seriously this time.

That first chapter poured out of me within a day or two of hearing Libba Bray speak in January 2012. I sent a full draft to my agent, Ellen Levine, in late December 2013, so it took me about two years to write much of the manuscript.

During most of that time I told nobody what I was working on. I like the freedom to go wherever I want on the page and to fail privately in ridiculous ways if need be.

After that strong opening chapter fell out, I slowly went over that material again and again for clues about how the story must proceed with these characters in the situation they find themselves in.

Before showing the draft to Ellen, of course, I got feedback from my wife Suzanne, and from friends and family, and made it as strong as I could.

Ellen contacted me enthusiastically in February 2014 and I worked on some more revisions for her. She sent it out to publishers in March and, although a lot of editors passed on it, we did get offers in April, with Caitlyn Dlouhy at Atheneum winning out.

I was way up north in Dawson City, Yukon Territory, Canada at the time as writer-in-residence at Berton House when the phone line to New York started to burn up. It was exciting and strange, to be so far away and yet to have such interest suddenly welling up about my unusual pterodactyl novel. (Hot Pterodactyl Boyfriend, it turns out, is the first novel of mine to be published simultaneously in Canada, the United States, the U.K. and elsewhere.)

I got a chance to meet Caitlyn in New York in July 2014, and U.K. editors in September. When I was in New York I also spent time at the Museum of Natural History which just happened to be showing a major exhibit on pterodactyls!

Some of the latest research changed the way I thought about the physicality of Pyke, and made it into the book. A lot of the revisions for Caitlyn involved strengthening middle parts of the story and ending it in a way that stayed true to the characters, and to the strangeness of the whole telling.

Again – I kept going back to the beginning for inspiration. The manuscript was pretty well finalized by April 2015, and I was reviewing galleys in October.

There wasn’t a major crisis or anything, no pitched battles, but Caitlyn and I did have strong discussions about all the characters and themes.

I take it for granted that my creations will feel real to me, but it’s lovely when an editor so fully immerses herself as well.

What were the challenges (literary, research, emotional, logistical) in bringing the story to life?

Nothing about this story was straightforward. On the opening page, Pyke appears as a speck in the sky, and by the end of that chapter he is the first inter-species transfer student in the history of Vista View High.

The initial challenge – how do the students accept him as anything but a monster come to eat the school? – I skirted in my first draft by summarizing the changes in a paragraph or two. It was only fairly late in revision that I realized I needed to show in scene those crucial minutes after Pyke has landed on Jocelyne and then carried her to the school nurse for attention.

Pyke is not the main character, of course – the story actually belongs to the student body chair, Shiels Krane, an A-type leader whose well-ordered plans for her graduation year have nothing to do with dealing with a pterodactyl who steals everyone’s heart, including her own.

In that way I was able to shift the question about believability – if Shiels buys into it, then it’s easier for the reader to believe, too. I did do a lot of background reading on pterodactyls, but in my mind I was treating Pyke as the ultimate bad-boy boyfriend, and that’s part of the fun of the story, watching characters adapt to a ridiculous situation that turns normal and then actually seems familiar.

We do it all the time in real life, just not with pterodactyls! So often writing fiction convincingly is a matter of taking care of the tiny details, making those seem lifelike, so that the huge lies one tells hardly stand out at all.

What made you commit to the writing life? What did you sacrifice for it?

I was very lucky to attend a graduate writing program when I was young, only 24, at the University of Windsor, where my mentor, Alistair MacLeod, happened to be a brilliant writer and terrific teacher. Without that early formation, I’m not sure I would’ve stuck with it, given all the difficulties I had initially in publishing anything at all.

It took me seven years of strong effort after graduation to get a single short story accepted in a literary journal (for which I was paid $50). My first three novel manuscripts were rejected before the fourth was accepted, and even that one sat in the publisher’s office for over a year before I got a yes.

Along the way I decided I was not going to be the sort of writer who lives in a tiny room in the YMCA, turning his back on life so that he might have time to write. I have worked at a number of full-time jobs that, fortunately, also fed my sense of life and society, and so nurtured my writing as well.

But if I hadn’t married and had children, I doubt I would have written for younger audiences. I faced a really tough decision at around age 40 when the excellent government job I had (as a writer and researcher on international human rights for the Immigration and Refugee Board of Canada) seemed to be too much to handle on top of novel writing as well.

Some of my adult novels were suddenly doing well, and I had to make a choice. It was a big gulp – our children were young, Suzanne had just started a doctorate program, and there was no extra money in case things went badly. So with family support I sacrificed the security of a regular paycheck, but was fortunate enough to have waited until my art was strong enough to withstand the pressures of such a decision.

It was the right thing to do, and I haven’t really looked back, especially since part-time teaching at the Vermont College of Fine Arts allows me to use my skills, and helps keep the wolf from the door during the inevitable down times in a writing and publishing life.

What about the business of publishing do you wish you could change?

I would love it if editors were not so extraordinarily busy, if they could somehow always keep a sense of the leisure of reading while opening up a new manuscript.

Editors often have crushing workloads and it means “quiet” stories often don’t have a chance to get their attention, they’ve got too many submissions to wade through before going back to their email backlog etc.

I know, it’ll never happen, and the really good editors do find ways to let themselves fall into a story when they read, no matter what their to-do list looks like. But I do think a lot of fine writing is overlooked because of the craziness of today’s schedules.

Alan is the faculty chair of the MFA program in Writing for Children and Young Adults at Vermont College of Fine Arts. See also Video Interview with Alan Cumyn from Indigo Teeen.