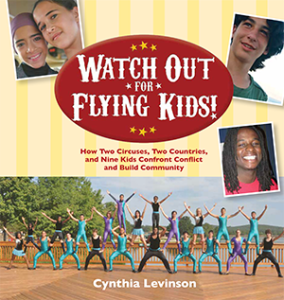 Cynthia Levinson’s book Watch Out for Flying Kids! How Two Circuses, Two Countries, and Nine Kids Confront Conflict and Build Community (Peachtree, 2015) is an in-depth look at the world of social circus —a movement that brings kids from different cultures together to perform.

Cynthia follows the story lines of nine kids in two circuses: Circus Harmony in St. Louis (comprised of suburban and inner-city kids) and Circus Galilee in Israel (comprised of Jews and Arabs).

As the kids evolve, they must overcome many physical, cultural and emotional obstacles.

Cynthia’s eye for detail, her ability to stay close to her characters, and her tenacity as a researcher makes her writing vivid, suspenseful and utterly compelling.

I couldn’t wait to see how life turned out for each one of these kids, and I’m in awe of her ability to keep all the balls in the air while researching and writing this book.

The research was a combination of exhilarating, onerous, and hilarious. Exhilarating because I got to spend hundreds of hours behind the scenes at circuses, seeing how kids learn to plant their feet next to their ears while lying on their stomachs, walk en pointe in toe shoes along a tight wire, and juggle clubs behind their backs.

Also, I spent nine days living with Jewish and Arab families in the Galilee. If you’ve heard of Middle-Eastern hospitality, you’ll know what this means. The number of dishes at every meal! The multiple ways of cooking eggplant! The warm pita and fresh hummus! In addition, circus people all over the world pride themselves on welcoming everyone as family.

So, I moved in with the St. Louis troupe, too. All of these experiences were invaluable for immersing myself in the Middle East, the Midwest, and the universe of circus.

The research was also onerous, however, because only four of the nine kids featured in the book live in the United States. One of the Americans was in professional circus school in Canada, and the Israelis, of course, were in Israel. So, I was dealing with three time zones and two foreign languages.

Technology glitches also intervened. When I couldn’t talk with the kids face-to-face, we communicated by whichever means worked best for them—telephone, email, text, Skype or Facebook messaging and video—as long as the devices, the cell towers, and the internet connections worked. When one of those went down, so did the conversation.

Then, there was the fact that they and their coaches—who spoke, variously, Hebrew, Arabic, German, Mongolian or occasionally English—were practically my only sources of information. Unlike many nonfiction books, Flying Kids is not based on archival research.

Instead, it was a journalistic effort, with the events unfolding in recent and real time. The investigations that did not involve personal interviews and observations consisted of prowling the kids’ and the circuses’ Facebook pages and email exchanges and begging them for photos and videos.

(I did read some secondary works, which focused on the practice and history of circus, the history of the Middle East, and the growth of St. Louis.)

Frankly, the hardest factor of all was that the “main characters” were all teenagers with much better things to do than talk with me about their childhoods. I kept a log of the times that various ones of them “stood me up” (in my definition).

Not infrequently, what I thought was an appointment for an interview, complete with a hired translator, turned out to conflict with homework. Or rescinded cell-phone privileges. Or a mood swing. Or with an urgent need to go to the beach—the photos of which I simultaneously tracked on Facebook! I could hardly blame them.

But I gnashed my teeth. I sent so many messages to my editor explaining why I simply could not write this book that she sent me a copy of The Little Engine That Could!

The hilarious part happened when I was trying to figure out what kids aged 10-14 know about the Galilee. I asked writer friends, and one reported, “I asked my neighbor’s daughter, who is 13. Said she, ‘Isn’t that where Puff the Magic Dragon lived?’”

Actually, as amusing (and informative) as that was, the truly funny part came when I tried out circus tricks. My website has mortifying videos of me falling over a mini-tramp and rolling off of a globe.

One of the factors that makes this book so exciting is your close focus on the many story lines of performers in both circuses. Describe the challenges of building up many story lines simultaneously.

You’re right—that was very tricky. (Pun intended!) I needed a lot of “main characters” because there were two circuses (one in Israel and one in the U.S.), each with at least two major ethnic/racial groups, and a variety of skills to cover. Combining these factors led to a cast of nine kids.

In addition to the story line for each of them, I also wanted to convey a story arc for each circus, as a whole. I didn’t know when I started whether or not they had one because, as I said, the circuses were evolving as I was observing and writing about them. It turns out, fortunately, that story arcs happen in real life! Candidly, I worried that that was too many lines for readers to keep track of. But each is so distinct, I think it works.

On top of all that, not only are there multiple story lines but they also take place over a number of years. Although the book ostensibly covers 2005-2012, it actually reaches back farther than that because three of the Americans started earlier than the others. So, I was also dealing with layered timelines.

How did your editor help with this process of making this book?

I’m thrilled to give a shout-out at every opportunity to my editor, Kathy Landwehr at Peachtree Publishers. Not only did she have faith in the project when I despaired, she guided it all the way through.

I suggested a picture book, but she sensed that it needed to be middle grade. Initially, she suggested that I write a fun book about “a year in the life of the circus,” covering just 2011-2012. That was the plan.

However, when I went to Israel in the fall of 2012 to do research, I discovered that the Lebanon War had started in 2006, first, in the Arab village where the Muslim kids in the circus live and then literally in the back yard of one of the Jewish kids. I immediately knew I had to start the story there. That made the book more historical and political.

And Kathy accepted all of that. She advised me to “write long,” which I did—and then helped me chop 25,000 words. I knew the original manuscript needed to be shortened but I didn’t know which 25,000 words to relinquish. Kathy is the behind-the-scenes heroine of this book. It would not exist or have the shape it does without her.

How did writing this book change you as a person? 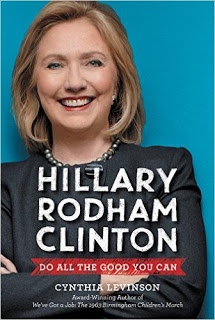 I love this question! No one has asked me this before but our books do change us, don’t they?

My previous book, We’ve Got a Job: The 1963 Birmingham Children’s March (Peachtree, 2012), gave me visceral insight into the gulfs between black and white people’s perspectives.

Watch Out for Flying Kids humbled me but also gave me more confidence. Humbled me because I really cannot do any of even the simplest tricks that the kids do.

Also, they are open to taking risks and to charging into new situations that I never had the nerve for at their age. Yet, producing this book with all of its complications gave me confidence as a writer. If I could do this one, I’m ready for more!

Speaking of which, in response to another of your questions, my next book, due out in January 2016, is a middle-grade biography called Hillary Rodham Clinton: Do All the Good You Can. Two other books are scheduled for release in 2017. 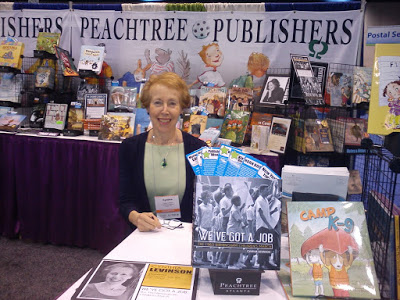