Congratulations on the release of Twenty-two Cents: The Story of Muhammad Yunus, illustrated by Jamel Akib (Lee & Low, 2014)!

What was the initial inspiration for the book?

Thank you! The initial inspiration was from one of my editors at Lee & Low Books.

After that book came out, he and I discussed what my next book should be. At the time, Jason had read Muhammad Yunus’ autobiography Banker to the Poor: Micro-lending and the Battle Against World Poverty with Alan Jolis (Public Affairs 1999). He thought Professor Yunus would be a great biographical subject for Lee & Low Books. He suggested I read Banker to the Poor, too.

I read and loved the book – like Jason, I was very inspired by Muhammad Yunus’ work. I agreed with Jason that Muhammad Yunus’ life would make for a fantastic children’s picture book biography.

The timeline took about a year, from idea conception to research and writing and submission for publication and acceptance. I worked with editors Jason Low and Emily Hazel for a few months as I crafted a first draft and received their editorial input.

After several rounds of revision, they felt the book was ready to submit for official consideration. And then I received the good news – the book was accepted for publication!

I then worked with editor Jessica Echeverria for the final version.

As for any major events, I would say the biggest event was meeting and interviewing Muhammad Yunus himself when he visited Los Angeles for a conference. It was truly an honor to meet and interview the man who won the 2006 Nobel Peace Prize.

What were the biggest challenges and triumphs in bringing the book to life? 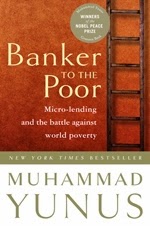 There are so many challenges into bringing a historical picture book biography to life for young readers. I’d say one of the biggest challenges is knowing how to balance historical facts and figures with an engaging and compelling narrative storyline that keeps the young reader’s attention.

Another challenge is making sure young readers can identify with the main character – what was Muhammad Yunus like as a child?

How can a modern-day child from America relate to a young boy growing up in Bangladesh from the 1940s to ’60s?

What are the universal elements of Muhammad Yunus’ life that any child can relate to and understand?

I discovered that Muhammad Yunus was a very sensitive and caring young boy who questioned why so many people in his country grew up in poverty. He wanted to help them. His spirit of generosity influenced all his decisions from childhood to adulthood. I wanted to share that beautiful and very universal compassion with today’s young readers.

In addition, the book also touches upon some very complex issues, from the history of Bangladesh the nation to the concept of “micro-credit” and banking and interest rates. These are topics that even adults can find complicated and confusing. So another challenge was figuring out how to write about these issues not only accurately but also in a way that did not bore or confuse a child reader.

Let’s just say there were many drafts and revisions before I finally figured it out!

What advice do you have for children’s nonfiction writers?

I have two pieces of advice for children’s nonfiction writers.

First, I cannot stress enough how important it is do “primary source” research. There’s so much information out there on the Internet, and a lot of it is second-hand information that is not credited properly.

Fact check your information. See if you can do live in-person interviews with sources for your book. There’s nothing wrong with “cold calling” a subject – I did that with Muhammad Yunus.

I found his website and left emails and voicemails with his office in Bangladesh. They responded immediately and graciously arranged a full sit-down interview with him.

You never know unless you try. Do follow-up interviews. Triple check facts with other sources. Make sure you footnote and credit your information.

All of this research advice is based upon my own background as a former journalist – I wrote for The Seattle Times, The Detroit News and People Magazine and received an M.S. in journalism from Columbia University. So I am very meticulous with my reporting.

I know it may seem like overkill, but trust me, you will feel so much better when you sit down to write because you really did your “homework.”

Now having said that, my second piece of advice is the exact opposite.

Once you have completed your research…walk away from it. Focus on finding out what the story is… and figure out who your main character is… a nonfiction book is not a magazine article or academic essay crammed with facts and figures.

So I also recommend using the same fiction-writing techniques you use for fiction picture books and novels for nonfiction books. Find out what the beginning, middle and end is for your story – what’s the conflict? What are the obstacles? How does your character change and grow on his/her journey?

Then for revisions, you can go back and figure out how to blend the nonfiction facts seamlessly into the “fictional” narrative story you’ve written.

How about those concentrating specifically on picture book biographies? 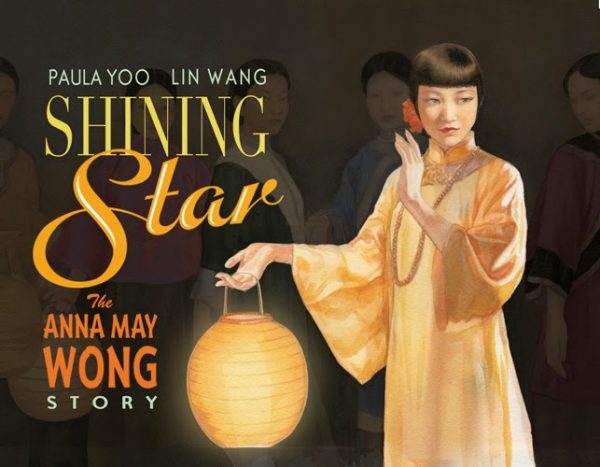 I’d say the exact same thing as above but with an emphasis on character. Your main character – the biography subject – is no different than a character in a fictional picture book or novel.

How does your character change at the end of the story? For Muhammad Yunus, he wanted to help poor people. But he soon found out that helping poor people was a lot more difficult than he had anticipated.

Instead of just using his economics degree to teach classes at the university, he went into the rural villages and met with poverty-stricken villagers so he could truly understand the vicious cycle of poverty. This led to his “out of the box” thinking and using his creativity to set up Grameen bank and the concept of “micro credit” and small loans for groups of women in order to teach them how to become financially independent.

This led to Muhammad Yunus winning the 2006 Nobel Peace Prize… his journey took him from being a compassionate child to a professor who used his intellect to make a huge difference in the world and change people’s lives forever. 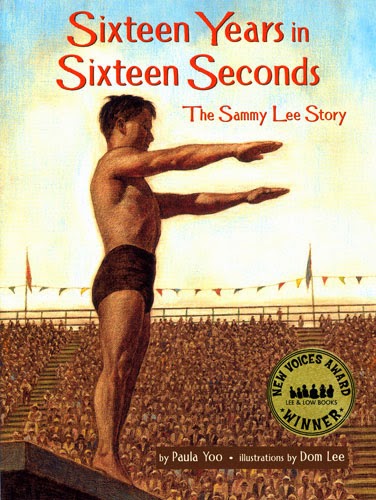 For anyone working on a picture book biography – think big. Your main subject should have a compelling and interesting childhood and many obstacles that he/she must overcome in order to triumph as an adult historical figure who helped change the world for the better.

Sammy Lee was not allowed to swim in his town’s public swimming pool in the 1920s-30s because he was not white. He overcame racial discrimination to win two Gold Medals as a diver in the 1948 and 1952 Summer Olympics.

Anna May Wong grew up as a poor laundryman’s daughter in downtown Los Angeles and overcame racial discrimination to become one of the first Asian American movie stars.

For those who are new to your work, could you tell us a bit about your back-list titles? 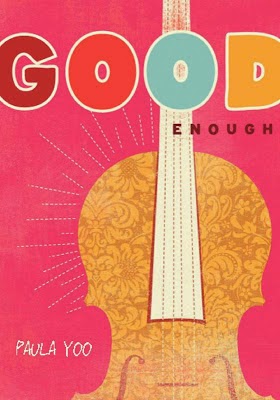 In addition to my picture book biographies, I also have a YA novel called Good Enough (HarperCollins, 2008) that was re-issued in paperback in 2012.

It’s a funny and heartwarming story about a Korean American teen violin geek. I poke fun at the “Model Minority Myth” and tackle other Asian American stereotypes/racial discrimination, but the bigger story is about a young girl who learns the difference between success and happiness and following her own path.

This novel was inspired by my real life background as a violinist.

(When I’m not writing, I play the violin professionally in various local orchestras and with rock bands in Los Angeles.)

I am also a TV writer/producer. I’ve written for everything from NBC’s “The West Wing” to SyFy’s “Eureka.” I’m currently a Supervising Producer on the writing staff for Amazon’s “Mozart in the Jungle,” which is based on professional oboist Blair Tindall’s memoir of the same name. The series was created by Paul Weitz, Jason Schwartzman, Roman Coppola and Alex Timbers. It’s a fun look behind the curtain of professional classical musicians.

I love how your blog pays proper attention to your cats! Please share with us how they contribute to your writing life! 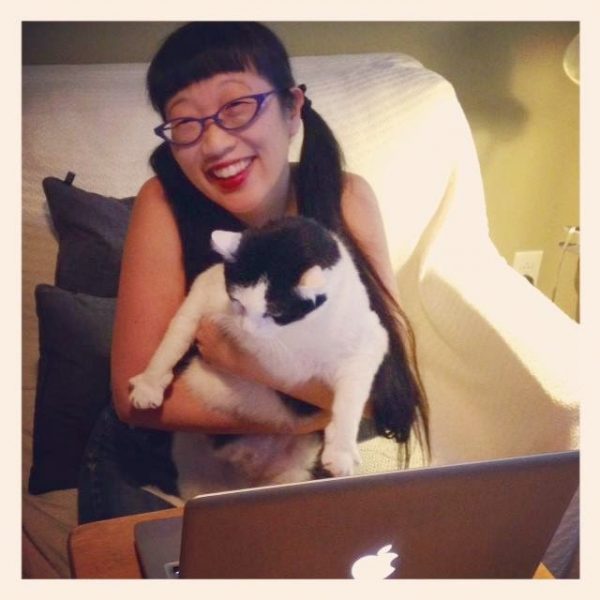 Thank you for the cat shout-out!

My three cats Oreo, Beethoven and Charlotte help me write quite a bit. They will sit by my side while I write (especially Oreo!).

Sometimes I have to “pitch” story ideas out loud for my TV job as well as for my books.

So I find myself pitching out loud to my cats… that way I don’t feel as strange talking out loud to no one else in the room. The cats are easily distracted, so it’s good practice for me!

They also keep me calm with their purring. And because they get restless and want to eat or play, it helps me from procrastinating because I know I only have a limited period of time to write before the cats start nudging me with their paws and heads, demanding attention. 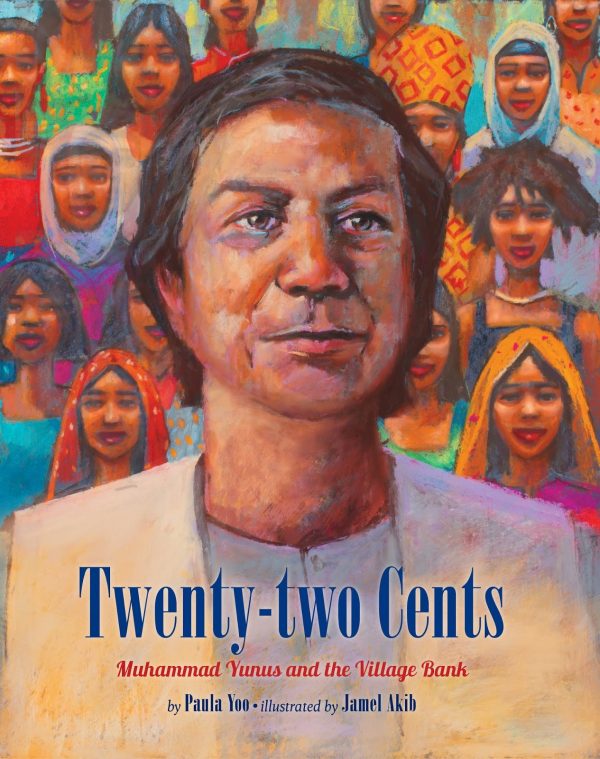 Paula Yoo is a children’s book author/novelist and a TV writer-producer.

Her latest book is Twenty-two Cents: Muhammad Yunus and the Village Bank (Lee & Low, 2014), illustrated by Jamel Akib. Her YA novel Good Enough (HarperCollins, 2008) was a 2009 Honor Book of the Youth Literature of the Asian/Pacific American Award for Literature.

Her other books include the IRA Notable nonfiction picture book biographies Sixteen Years in Sixteen Seconds: The Sammy Lee Story (Lee & Low, 2005) and Shining Star: The Anna May Wong Story (Lee & Low, 2009), which also won the 2010 Carter G. Woodson Award from the National Council for the Social Studies.

She is currently a supervising producer for the show “Mozart in the Jungle” on Amazon. Her other TV credits include NBC’s “The West Wing” and SyFy’s “Eureka.”

When she’s not writing, Paula teaches, plays her violin and hangs out with her three cats. Her website is http://paulayoo.com and you can follow Paula and her cats on Twitter @paulayoo and @oreothecatyoo