Congratulations on the release of my favorite of your books, Little Green Men at the Mercury Inn (Roaring Brook, 2014)! What was your initial inspiration for the novel?

Broadly speaking, I drew on my childhood experiences of summer vacations in Florida.

When I was a kid, my parents packed themselves and my brother and me up into the station wagon and we’d drive to Cocoa Beach, where my parents’ best friends (and their adult children) owned a motel. We fished, we swam, we went to the theme parks and Kennedy Space Center and saw space shuttle and rocket launches. It was always a great time.

But the spark for the actual novel came when I was working on another project that I’d been cycling on for a while and that I hadn’t gotten right yet.

So as a sort of thought experiment, I tried to write a character who was completely different, came from a different world, than the protagonist in that book. The character was Aidan, and all I really knew about him at the time was that he lived at a motel in Cocoa Beach.

But then he and the motel sort of came to life in a way that none of the characters in the manuscript that he was supposed to be for actually did.

The tone was more dry and funny and had voice and a terrific setting, and I knew at that point that it was too good to waste on that other project.

And then, for some reason, I wrote “And then he sees a UFO,” and everything cascaded from there.

What was the timeline between spark and publication, and what were the major events along the way? What were the challenges (literary, research, psychological, and logistical) in bringing it to life?

Early on, I made three important decisions, only two of which made it all the way through to publication.

The first that made it through was to make the story humorous, but with some serious underlying themes.

It’s sort of a mashup of 1930s-1940s screwball comedies with UFO conspiracies and coverups.

Kind of, “Arsenic and Old Lace” (or maybe “Bringing up Baby”) meets “Close Encounters of the Third Kind.” In middle school.

The second to make it through was that I wanted the motel itself to really come to life. The novel is light sci-fi, but any time you have a fantastical element, I think it’s important to have a grounding.

I wanted the motel to really feel almost like a character in its own right, in the same way that, say, Hogwarts Castle feels like a character in the Harry Potter books. So the Mercury Inn is loosely based on my parents’ friends’ motel, but with a sort of retro-50s contemporary upgrade. And a koi pond.

The one that didn’t make it through was that the story was initially told from the first-person points of view of Aidan, the kid who lives at the motel, and Louis, his friend who helps out and is a UFO conspiracy enthusiast: Together they befriend a girl named Dru Tanaka (whose family is staying at the Mercury Inn) and, along with all of Florida, they see a UFO over the motel on the day of a space shuttle launch. From there, Aidan deals with troubles and mysterious goings-on at the motel, while Louis has issues at home and begins to uncover a bigger and bigger government conspiracy. 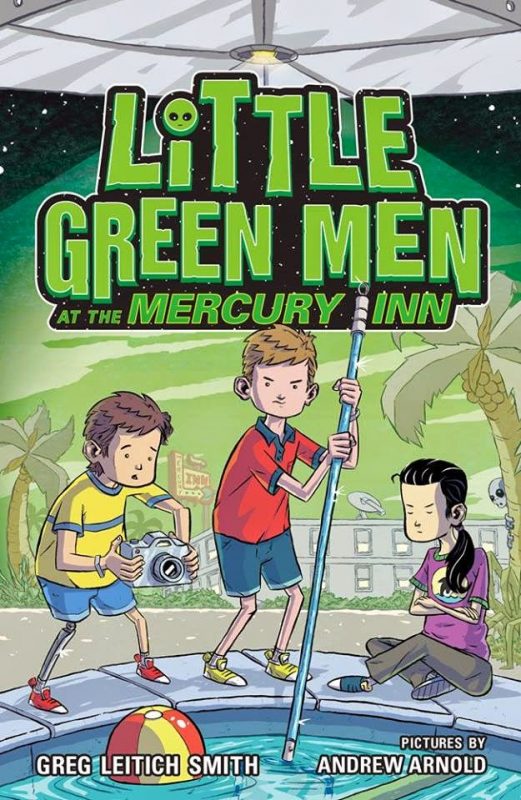 This was the version I sent out and it made it to acquisitions committee a couple times. Both times it was rejected because of concerns that middle graders don’t like alternating point of view and, besides, the voices were blurring. (I disagreed, because I’d already written two alternating point of view novels and figured I knew how to give characters distinctive voices).

Then my agent sent it to Deirdre Langeland at Roaring Brook, and Deirdre suggested that the Louis-coverup storyline really took away from the novelty of the motel storyline. Also, she wondered if there was a need for alternating point of view at all, and that the Louis scenes did not appear to be working independently.

I mulled this over for a while, but was somewhat resistant because I figured the plotlines were so intertwined that it would be extremely difficult and time-consuming to disentangle them.

In the end, I decided to give it a go and it took me all of two weeks, which was simultaneously disagreeable and gratifying.

Now, the story is much better and is told from Aidan’s point of view only, with the focus on the events at the motel and the zaniness that ensues when word spreads that theirs was the place with the UFO encounter. The government conspiracy is toned down, and the information that Louis acquires is now folded into the experiences at the motel. Overall, the flow is better and the themes are more focused and it’s a whole bunch funnier and thematically coherent.

The other really big event to happen along the way was the decision by my editor to include illustrations by Andrew Arnold and I could talk about them a whole lot, but a picture is worth a thousand words.

Suffice it to say that they’re absolutely terrific and add a lot to the look and feel of the book.

Your Peshtigo School companion novels–Ninjas, Piranhas, and Galileo and Tofu and T.rex–originally published by Little, Brown, have been re-released by IntoPrint. For those new to your comedic writing, could you fill them in on these books? How are they different from your more recent work?

Ninjas, Piranhas and Galileo is a romantic science comedy courtroom drama — the story of three friends who take part in their school science fair and end up in their student court because of it. It’s sort of based on the story of Galileo.

Tofu and T.rex is the story of a girl who’s a vegan who goes to live with her cousin’s family who own a German delicatessen and butcher shop.

Both are comedies set at the fictional Peshtigo School of Chicago.

They’re both set in the “real” world, but a world in which everything is taken up a notch of extremes…

Overall, the tone is less dry, slightly less frenetic, and perhaps more zany than in Little Green Men at the Mercury Inn.

You write both realistic and fantastical fiction. How is it different to tackle each? What did one teach you about the other?

The key to any kind of fiction is to be honest with the reader and true to the characters.

Basically, it requires obeying the laws of the universe.

In contemporary realism, of course, that involves making sure that what goes on the page is “real,” whether it’s, say, school procedures or traffic laws or the laws of thermodynamics. If you break them, you’ll lose the reader.

In fantastical fiction, you can make up at least some of the laws of your universe, but you can’t break them without alienating the reader.

In Chronal Engine (Clarion, 2012), for example, I wanted to create a realistic world of dinosaurs, portraying humans encountering a world that represents our understanding of the Late Cretaceous. This meant only using plants and animals from that era and geographical location.

If I’d thrown in, say, a saber toothed tiger just because it was cool, the reader would’ve been thrown out of the reality of the Cretaceous. (Of course, in that book, I also had to pick my laws of time travel and stick to them…).

In Little Green Men at the Mercury Inn, I created a world with a quirky motel in which UFOs exist and aliens walk among us, so I tried to make the science and engineering aspects of that reasonably plausible; if suddenly a flying unicorn appeared for no apparent reason, the reader’s inclination might be to throw the book at the wall.

That said, with the contemporary realistic humorous work, I tend to think that comedies inhabit the same universe as musical theater. We all know that a group of nuns is not going to burst into song when trying to figure out “How Do You Solve a Problem Like Maria?” but it’s okay when they do. In the same way, with comedy, there are going to be situations that may be real but not realistic, but it’s okay because it may be true to that reality.

Matching humor with the fantastical was really the most difficult. As a reader, I’ve found that mixing genres in that way can be problematical, in that sometimes the humor can draw the reader out of the fantastical world.

With Little Green Men at the Mercury Inn, the humor is intertwined and really as much of the world and characters as the fantastical, perhaps because it’s based on the real world, but with the addition of the aliens….

Your books all feature diverse casts, including characters who share your Japanese- or German-American heritage. You’ve also, in Little Green Men at the Mercury Inn, written a disabled hero. What are your thoughts on the current discussion around diversity in youth literature?

I find it gratifying that the conversation has finally reached the point that what we’re discussing is essentially the notion that multicultural is mainstream.

This is an approach I’ve been arguing for some time and which is reflected in my novels.

With the possible exception of Shohei in Ninjas, Piranhas and Galileo, all of my characters have elements in their backgrounds/back-stories that could be characterized as diverse or multicultural, but the stories of their ancestries or their diversities per se are not thematic or the focus of the books.

And I think that reflects my young readers. There’s more to kids today than being descended from the oppressed or the oppressor. They have a right to stories reflecting their realities.


What are you working on now?

At the moment, I am finalizing the sequel to Chronal Engine.

Titled “Chronal Engine: Borrowed Time,” it takes up where Chronal Engine left off and continues the story of Max and his friends as they travel back to the Cretaceous and encounter previous generations of their family.

Thanks for being the official chef of Chez Leitich Smith. What’s for dinner tonight?

“In this gleefully absurd tale, Smith (Chronal Engine)
unfurls a series of alien-inspired hijinks at a space-themed motel on
Florida’s Space Coast…Arnold’s skillfully drafted spot cartoons give
this offbeat story a lively layout and match Smith’s light and breezy
tone, grounded by the occasional serious moment. The result is an
engaging, humorous look at humans learning that they’re not alone in the
universe.” –Publishers Weekly  (For the complete review, click here)

“The Mercury Inn…shelters a colorful cast
of characters…in a plot that twists and turns like a roller coaster
through the engaging setting. The book design and spot cartoon art with a
retro space-age feel work well with the wacky characters and situations
of this enjoyably beach-y sci-fi escape.” –The Horn Book

“The quirky setting and diverse characters add originality.  An accessible and whimsical read, this should have wide appeal.” –School Library Journal

To Infinity and Beyond by Cynthia K. Ritter from The Horn Book. Peek: “The twisty plot and engaging setting of Greg Leitich Smith’s Little Green Men at the Mercury Inn, along with Andrew Arnold’s retro cartoon spot art, work well with the wacky characters and situations.”