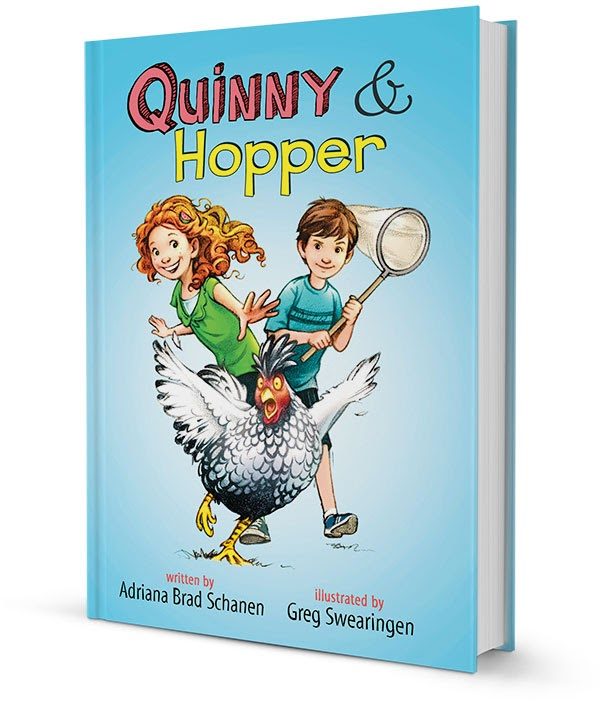 Adriana Brad Schanen is the first-time author of Quinny & Hopper (Hyperion, 2014). From the promotional copy:

Quinny and Hopper couldn’t be more different. They’re an unstoppable team. But when summer ends, things suddenly aren’t the same.

Can Quinny and Hopper stick together in the face of stylish bullies, a killer chicken, and those brand new Third Grade Rules – especially the one that says they aren’t allowed to be friends anymore?

What inspired you to choose the particular point of view featured in your novel? What considerations came into play? Did you try the story from a different point of view? If so, what made you change your mind?

Quinny & Hopper alternates between the first-person voices of two polar-opposite eight-year-olds, whose intense summer friendship runs smack-dab into the uncertainties of a new school year.

I haven’t seen a ton of early middle grade fiction written in first-person (let alone in dual first-person). I suppose the thinking goes that it can be too immediate, maybe too emotionally claustrophobic for newly-independent readers. And it doesn’t offer the same opportunity for the writer to pull back and show context or convey a lesson (thank goodness for that).

But something told me to forge ahead with this structure. The idea of putting the reader in someone else’s shoes—or brain, rather – felt compelling to me. Why not go there?

Who says rising third graders are too young?

And I couldn’t think of a better way to encourage kids to put themselves in someone else’s shoes than by actually doing it myself.

It also seemed that toggling back and forth between these two characters’ voices would create a bit more breathing room, and make for less of a hothouse feel than a solo first-person point of view.

I liked how two voices playing off each other can spark comedy, conflict, momentum, and foster empathy and perspective-taking.

Of course I did experiment and try third person – which felt more appropriate and authorly, and would probably have been easier to structure.

But it also felt like I was setting the narrative at an emotional remove. It just felt colder. I was creating distance, when I wanted the reader to be this close to the story.

So I went back to my intuition and wrote this young middle grade story in dual first-person voices. For me, it was the most visceral way of exploring the main characters’ psyches, and their blooming but fragile, ripped-to-shreds-and-stitched-back-together friendship.

How have you approached the task of promoting your debut book? What online or real space efforts are you making? Where did you get your ideas? To whom did you turn for support? Are you enjoying the process, or does it feel like a chore? What advice do you have on this front for other writers?

I love connecting in a personal way with educators, parents and kids. Just chatting about books and life with actual people in the real world. Maybe that’s not really “marketing,” but I’m putting it in that category because, honestly, the over-the-top pushy stuff makes my skin crawl.

I’m guest-blogging a bit near my release date, but not going crazy. For early middle grade fiction, it doesn’t seem to be as impactful as things like school visits.

I think a great discussion/teacher’s guide is important – and thinking critically and creatively about all outreach to schools/libraries.

I’ve been reaching out with swag to independent booksellers.

In an age of mass emails, I love getting and sending personal notes.

As for social media in general, I don’t relish the idea of putting on a virtual sandwich board and hawking my literary wares online.

So I try to look at it as just another way to connect with and learn from others. Keep it low-key, not a stressor. I enjoy following educators, booksellers and writers on twitter – it’s a great way to expand my to-read list. I devote a couple of hours weekly (max!) to keeping up on industry news and a handful of blogs.

And instead of maintaining my own blog, I’m working on my next book. Which I keep hearing is the best thing a writer can do to market her/himself, anyway.

So basically I’m trying to keep promoting in its place: essential, but secondary to the writing itself. The fact is, so much of it is out of our control anyway. Someone will rip your book to shreds on Goodreads, someone will rave about it on Twitter. It’s all in a day.

You can’t let it distract or derail you — you have to move past all the noise, good and bad, and hold onto your own true internal motivation for doing the work.