Maria E. Andreu is the first-time author of The Secret Side of Empty (Running Press, 2014). From the promotional copy:

As a straight-A student with a budding romance and loyal best friend, M.T.’s life seems as apple-pie American as her blondish hair and pale skin. But M.T. hides two facts to the contrary: her full name of Monserrat Thalia and her status as an undocumented immigrant.


With senior year of high school kicking into full swing, M.T. sees her hopes for a “normal” future unraveling. And it will take discovering a sense of trust in herself and others for M.T. to stake a claim in the life that she wants.


Author Maria E. Andreu draws from her personal experience to tell a story that is timely, relevant, and universally poignant.

The first few drafts of what would later become my debut novel was written as a memoir. Like the protagonist in The Secret Side of Empty, I too was undocumented as a child and teenager. For years I worked on it, refined it and sent it off to agents. For years, I collected lovely and gracious rejections.

I worried that maybe I was just unpublishable. I often wondered if I was kidding myself thinking my book could be on bookshelves. I wanted it but I felt totally unworthy of it. The mounting rejection slips seemed to corroborate my fears.

Then, determined to get to the bottom of why I got so many rejections that said, “Love the voice but I’m going to pass,” I signed up for a pitch conference in New York City.

A pitch conference (or “pitch slam” as it is sometimes called) is an opportunity to sit face-to-face with agents and pitch them your idea. Terrifying, but necessary, dangling as I was just with a few inches of writing hope left to grasp.

The day of the conference I could barely eat. The agents, legendary creatures, each sat at round banquet style tables.

In front of them, a gaggle of about eight hopefuls clustered grasping query letters in sweaty hands, reading them aloud one by one.

After each, the agent gave his professional opinion.

Most of that day is hazy in my memory. I was miserable most of it, dreading my turn to speak. Also, when I looked out over the ballroom full of aspiring writers I was suffused with a vast hopelessness. “There is no way I’m going to make it when so many people are trying and are better than I am.”

There they were, solid and real, a crowded ballroom full of reasons why it would always be impossible to break through.

My last assigned agent was one whose name I’ve forgotten and whom I almost didn’t meet at all. Her bio said that she was looking for young adult titles. Since I wanted to write for grown-ups, I had no interest in her feedback. But I’d promised myself that I’d be open to the whole experience, no matter how painful or seemingly pointless. So I sat at her table. I wasn’t even nervous for this one, like I wouldn’t have been with a cookbook agent or a bicycle repairperson.

I read her my pitch. She asked me a few questions about particulars. 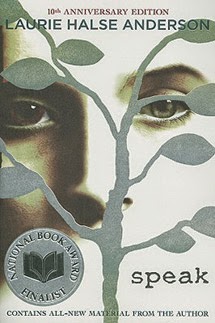 Finally she said, “It’s a great idea. I think the issue is that you’re trying to sell this as a book for grown-ups, but all the action happens when the protagonist is a teenager. This would make a great YA novel.”

I thought (but didn’t say), “When you’ve got a hammer, everything looks like a nail.” Then I thanked her politely and proceeded to completely ignore her advice.

Months later my daughter, who was 12 at the time, wanted to read Speak by Laurie Halse Anderson (Square Fish, reprint 2011), a YA book that I thought might be too mature for her.

I decided to give the book a quick read, thinking I’d either ask her to save it for later or that I’d be ready for her questions when they did come.

Within a couple of pages I was absorbed by the beauty of the writing and the expert pacing of the story. My a-ha moment, months overdue, happened right then. Of course.

Who was I to think I shouldn’t write in this genre? I would be honored… no, humbled… to be included in a genre that contained words this beautiful and a book this well-done.

I reworked my idea into YA fiction. Looking for an agent, I opened up Speak and the other big YA book I could think of: Twilight by Stephenie Meyer (Little Brown, 2005). I was surprised to learn they were both with the same agency. I pitched them (and only them), then braced for the rejection.

Instead, what came was an offer of representation so beautiful that a copy of it still sits framed in my living room.
Extra bonus? Anderson and Andreu are very close together alphabetically. When my book finally hit bookshelves, there it was, face-out and pretty next to Anderson’s latest on the New Teen Reads shelf. What had seemed impossible had finally come to pass in the most magical way.

I’m kind of an obsessive planner, and I had plenty of time to study book promotion while I was getting rejections from agents. I read 1,001 Ways to Market Your Books by John Kremer (Open Horizons; 6th Edition, 2006) cover to cover. I scoured the internet, bookmarking sites. I created timelines and lists of ideas.

The conventional wisdom seemed to be that, even if you do get traditionally published, you should be prepared to promote your book as if you’re self-published. Because at the time I wasn’t sure I’d even be able to get traditionally published, I took that advice to heart. Either way, I’d have to learn to promote a book, so I might as well get started.

It was helpful because it taught me about the business. Later, when I was lucky enough to land with a very supportive publisher, I was delighted to learn that they would do a lot of the heavy lifting, like sending out review copies and setting up a blog tour. But my extensive research helped me know what questions to ask.

I decided early on that the motto for my debut year would be, “The answer is always ‘yes.’” 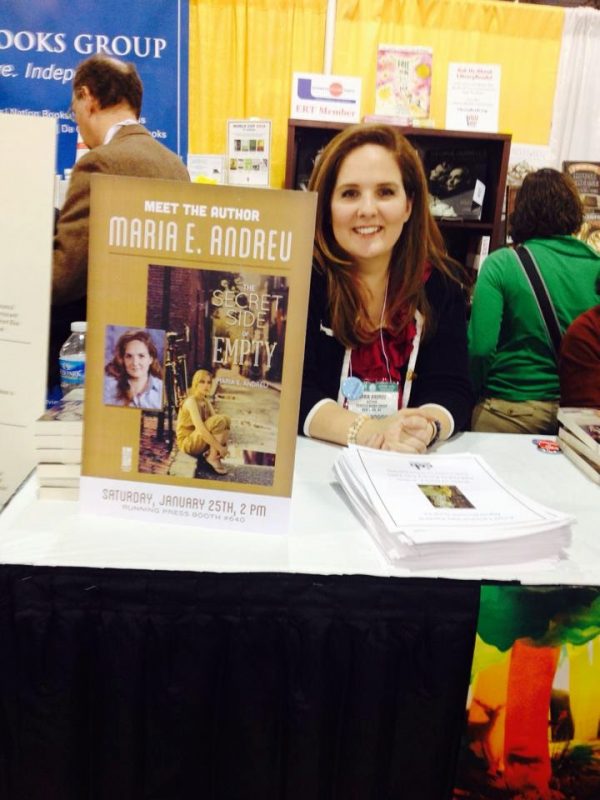 Every opportunity big and small got a “yes” without exception.

Was it exhausting? Absolutely. But if I had it to do over again I’d do exactly the same thing.

I have two reasons for that: one, I’ve learned a ton about book promotion, much of which will help me be choosier in what I do the next time around. But how would I know that a blog interview is much easier to do than a guest post unless I’d slogged through guest post after guest post, racking my brain trying to figure out how to clever and inventive?

The experience has been invaluable.

The second reason is that when you’re just starting out you’re just an unknown entity in a crowded world. Book buzz is built by people. Readers, yes, but also librarians and booksellers, reviewers and bloggers. Every opportunity to interact with one, busy as they all are, is a gift.

I did one event where only three people showed up in the rain. But I put on a show like we had a standing room only crowd. One of those people turned out to be a high school librarian that spread news of my book to her school and brought kids from her reading club to a subsequent (much better-attended) event that I did. Because you never know where things can lead, give it your all every time.

Probably one of the best things I did before my book came out was join an online group of authors whose debut books were scheduled to come out the same year as mine (OneFourKidLit). There are lists like this one for every debut year. Even if you haven’t yet sold your book, you can find similar communities at places like SCBWI and online writing communities.

OneFourKidLit has been great for me because, although I have an amazing support system, sometimes the people who care about you don’t understand everything about publishing. So when I’m stressing trying to juggle writing my new book and promoting my first one or trying to figure out how to get booked on book festivals, it’s great to have a group of people who are in the same boat. Otherwise it can be a pretty lonely and stressful boat!

I do love book promotion.

Having a chance to talk about a labor of love that it took me years to bring into the world?

If I had one bit of advice for people both aspiring to be published and those newly so, it is this: Never lose your sense of wonder. Writing, figuring out meanings and how to convey them, learning to connect with your readers, this is the important work of life. The rest of it: Deadlines, bad reviews, rejections, grumpy book people, they’re just details.

Hold on to the feeling that you’re doing what you’re here to do.

What can be more important than that? 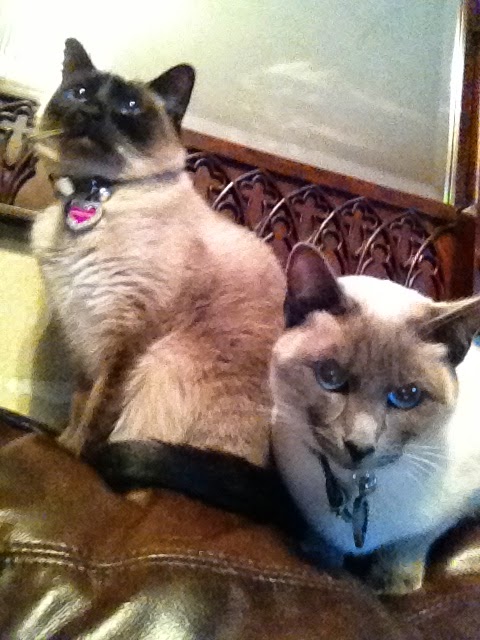 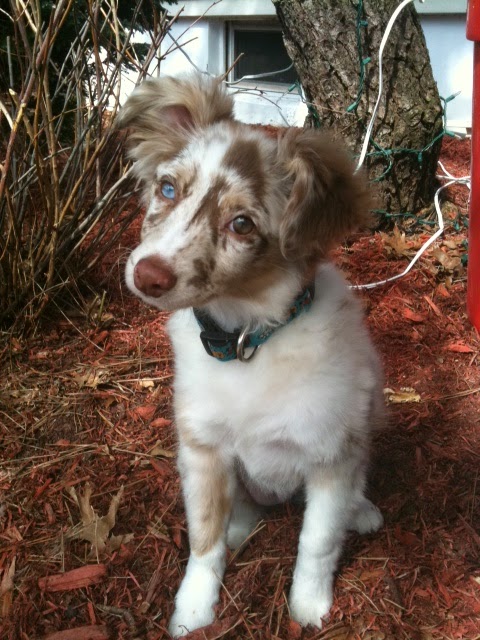 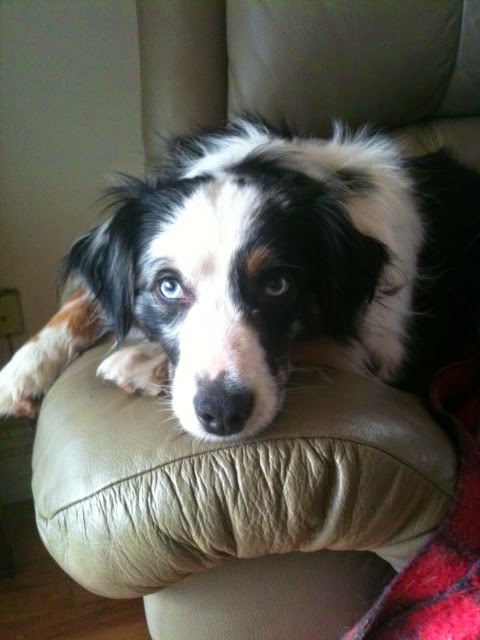 2 thoughts on “New Voice: Maria E. Andreu on The Secret Side of Empty”