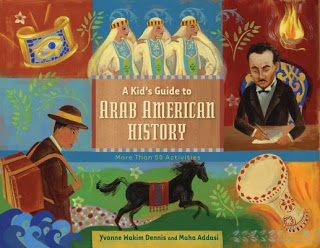 Yvonne Wakim Dennis and Maha Addasi are the co-authors of A Kid’s Guide to Arab American History: More Than 50 Activities (Chicago Review Press, 2013). From the promotional copy:

Many Americans, educators included, mistakenly believe all Arabs share the same culture, language, and religion, and have only recently begun immigrating to the United States.


A Kid’s Guide to Arab American History dispels these and other stereotypes and provides a contemporary as well as historical look at the people and experiences that have shaped Arab American culture. Each chapter focuses on a different group of Arab Americans including those of Lebanese, Syrian, Palestinian, Jordanian, Egyptian, Iraqi, and Yemeni descent and features more than 50 fun activities that highlight their distinct arts, games, clothing, and food.

Kids will love dancing the dabke, constructing a derbekke drum, playing a game of senet, making hummus, creating an arabesque design, and crafting an Egyptian-style cuff bracelet. Along the way they will learn to count in Kurdish, pick up a few Syrian words for family members, learn a Yemeni saying, and speak a little Iraqi.

From Yvonne: Although there have been improvements since when I was a child, the image portrayed in history books and curriculum is basically the Myth of America: this hemisphere didn’t exist until 1492; these lands had no purpose until 1776; this country was built by and with the values of WASP men with a few other Christians thrown in. And women? Apart from fashioning the flag and fending off hordes of evil Indians, they don’t merit much space.

I’ve felt that my duty is to correct that myth and most of my books have either been about American Indians or multicultural.

I respect kids and their ability to understand so I’ve tried to create nonfiction that maintains the integrity of the oral tradition, engages with storyteller magnetism and hopefully effects long lasting and positive change in a way that’s not didactic or preachy.

Truthfully, I am just tired of the ‘hater grown-ups.’ It was time to tell the truth about Arab Americans as I had with Native peoples. I wanted a co-author, a Muslim born in Arabia. I asked the amazing writer Elsa Marston if she had any ideas. Her suggestions led me to the wonderful Maha Addasi! I learned so much from Maha and appreciate her scholarship, optimism and joyfulness.

From Maha: I spent my undergraduate years at Butler University in Indianapolis, where fellow students were interested in knowing more about life in the Middle East where I grew up. The beauty of being on a college campus is that students have this clean slate and open mind of learning about other cultures without being hung up on the baggage that comes from the political atmosphere and how it can be misconstrued. That genuine interest in the true charm of the Arab-American culture is what I hoped to capture in this book.

Working with Yvonne was a fabulous experience. Yvonne had a list of the stereotypes she wanted to combat that matched mine in length! Our discussions over extended telephone conversations were filled with laughter and were so therapeutic to the soul. This is something collaborative authors seek and rarely find. I’m so glad our paths crossed when they did.

From Maha and Yvonne: Both of us are passionate about our writing and liked each other’s style – important in a collaborative work. Maha is a naturalized citizen and speaks fluent Arabic while Yvonne is a second generation Arab American who only knows Arabic curses. Maha is Muslim; Yvonne follows her father’s traditional Native religion. Our varied experiences were never a problem, but a plus. What was a problem, however, was cramming an entire group of people with diverse cultures, histories and religions into one small book!

We assigned ourselves specific chapters, but had a free hand in editing and enhancing each other’s work. We read everything we could find on Arab Americans. Sadly, we had to buy most of our books as our local libraries had very little. Not only does Amazon love us, but this was yet another validation for the necessity of this book!

We interviewed dozens of people we knew about or sleuthed down while trolling the internet. Magically, art projects and fabulous people appeared, like New York City’s only remaining sidewalk artist, Hani Shihada, who has decorated the pavement in Yvonne’s very neighborhood!

We took bits and snippets and put it together with activities that would reinforce the text and make Arab American kids proud of their heritage while debunking Arab American stereotypes for all youngsters. We designed projects that are not only fun and cultural, but useful.

We did not trivialize religion by including sacred objects. The esteemed Dr. Jack Shaheen was our professional reader and gave us valuable guidance every step of the way. He is the ‘go to’ expert on Arab Americans and we were thrilled that he offered to help us.

We highlighted notable Arab Americans we could connect to a specific activity or if they had an angle of interest or benefit to kids.

We were truthful and confronted stereotypes, racism and hard times.

It was very tough when we had to cut bios of some of our heroes. In many ways, nonfiction is easier to write as we are retelling and sometimes re-framing the truth. However, history can be challenging as we do not want to misinterpret incidents or actions as those people are not around to defend themselves.

The support from everyone, both Arab and non-Arab has been truly amazing. Our efforts and determination have filled a gap and we would like to think that the results of our labors will help publishers and booksellers want to continue to create diverse books that represent all who live in our very diverse nation. Our dedication in the book is how we truly hope this book will be perceived.