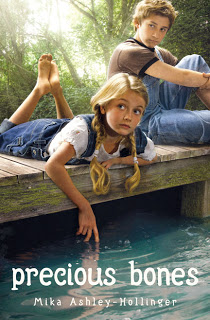 To keep mystery and suspense throughout your story, up until the very last page, you need to engage the imagination of the reader at all times.

In my debut young adult novel Precious Bones (Delacorte, 2012), I tried to create suspense and mystery by using my young protagonist’s self doubts and the unique environment of a swamp.

I also created characters that bordered on the edge of being bigger than life. Their personalities were bold and outright, but there was also something hidden, good or bad, just underneath the surface. Some characters had contradicting traits and actions that left an air of mystery around them.

Hopefully, readers were often times left with the question; is this person a good guy or a bad guy, is he capable or not capable?

There were numerous times when the young protagonist’s perspective became clouded over with suspension. She allowed small worms of doubt to wiggle around in her mind. Sometimes stories and legends she had heard her entire life became entangled with her present day interactions.

Character traits also came into play. Was someone with a large, slow moving body capable of solving a serious murder? Was an old woman that lived in the swamp, an evil witch or just a lonely old lady? She even allowed doubts to creep in about her own beloved Daddy–was he just a harmless rascal or a man capable of doing unimaginable bad things?

Of course, the environment where the story takes place, a Florida swamp, is in it self, mysterious as well as frightening. I wanted to pay homage to the swamp for the magnificent, nourishing, ever changing place it is, and at the same time make use of it’s potential for danger. Some characters viewed it as a gentle gift from God, where animals came to raise their young, to others it was a dark murky place where secrets could be hid under a thick layer of muck.

The use of contradicting scenes and events is a sure way of bringing suspense to a story. Also creating a sense of doubt about a characters true nature results in page-turning events.

The reader wants to know, what’s this guy up to next? I let the reader’s imagination come to it’s own conclusions, before the real truth was revealed. I tried to make good use of the element of surprise.

One thought on “Guest Post: Mika Ashley-Hollinger on Character & Setting in Mystery”