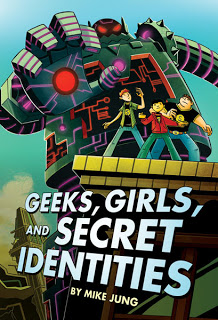 Mike Jung is the first-time author of
Geeks, Girls, and Secret Identities
(Arthur A. Levine Books/Scholastic, 2012) and also is a contributor to
Dear Teen Me: Authors Write Letters to Their Teen Selves, edited by E. Kristen Anderson and Miranda Kenneally (Zest Books, 2012) and
the forthcoming Break These Rules! edited by Luke Reynolds (Chicago Review Press,
2013).

From the promotional copy of Geeks, Girls, and Secret Identities:


During Professor Mayhem’s latest attack, Captain Stupendous barely made it out alive – although he did manage to save Vincent from a giant monster robot. It’s Vincent’s dream come true… until he finds out Captain Stupendous’s secret identity: It’s Polly Winnicott-Lee, the girl Vincent happens to have a crush on.


Captain Stupendous’s powers were recently transferred to Polly in a fluke accident, and so while she has all of his super strength and super speed, she doesn’t know how to use them, and she definitely doesn’t know all the strengths and weaknesses of his many nemeses.


But Vincent and his friends are just the right fan club to train up their favorite superhero before he (she?) has to face Professor Mayhem again. And if they make it through this battle for the safety of Copperplate City, Vincent might just get up the courage to ask Polly on a date.

I was a voracious young reader, absolutely voracious. The years between ages 9 and 11 were, in terms of reading, absolutely the most satisfying years of my life, even though it was also a time of change and transition – my family moved from California to New Jersey just before my ninth birthday, and I terribly missed my friends and family on the west coast.

We actually left our dog there with my grandparents, which felt like the cruelest blow of all.

However, I acquired a bit of a reputation at our new local library for being a big reader, and I positively basked in the cooing approval of the librarians there each week as I walked out with my customary, teetering stack of books.

Those were also the years in which we went back to California for the entire summer, and among the many pleasures of that experience was the fact that my cousins Cathy, Grace, and Peter gave me carte blanche to plunder their bookshelves.

When I was eleven, about a quarter of the way through the school year, I was moved up from the sixth grade to the seventh grade, which turned out to be a very bad thing for me. I struggled terribly, failed to adjust to my new social surroundings, and saw my academic performance drop below a high-achieving level for the first time in my life.

And the nature of reading changed for me – reading functioned as more of an escape from reality than it ever had before, and it was often with a kind of frenzied desperation that I immersed myself as deeply as possible in the stories I read. I didn’t limit myself solely to novels – I also read comic books, magazines, our family’s World Book Encyclopedia, and a lot of nonfiction – but novels were always the first option, and science fiction and fantasy eventually became my flavor of choice.

The clearest and strongest influence those years had on Geeks, Girls, and Secret Identities is the main character, Vincent. Vincent’s an outsider, and he has some challenges with regard to low self-opinion, and he’s not a thinly disguised version of my childhood self – in some ways he’s very, very different from the boy I was – but the emotional truths he deals with are familiar to me and I suspect those emotional truths will be a recurring theme in my work.

I first saw the name “Arthur Levine” on Lisa Yee’s blog, and I believe the first photo I ever saw of Arthur was him and Lisa balancing books on their heads. Something completely goofy and lacking in self-importance, in other words.

I thought how great it was that people in this industry didn’t take themselves too seriously, and if a funny author like Lisa Yee could find a like-minded editor, why couldn’t I?

It wasn’t long before I learned Arthur was the co-editor of the Harry Potter series, but while that knowledge definitely impacted my mental image of him, it didn’t supersede my original impression of him as Lisa Yee’s editor and a guy with an obvious sense of humor.

As I continued researching the industry, I heard more and more about what a nice guy Arthur was. I also realized just how staggeringly high the overall desire to work with him was – there was clearly no end to the number of aspiring (and accomplished) authors who, like me, had Arthur in the top spot on their “Editors I Want to Work With” lists. I wasn’t even agented at the time, so I put my head down and focused on the daily grind of writing my manuscript.

I finally started my current borderline codependent relationship with Facebook in 2009, and after friending Lisa (who I had a remote-but-pleasant online acquaintanceship with by that point), I started commenting on her status updates, as great teeming masses of other people were already doing.

This went on for a year or so, and imagine my surprise when in early 2010 I got a friend request from one Arthur A. Levine! Apparently he’d seen a variety of my comments on Lisa’s posts, thought they were funny, and wanted to get acquainted.

So I had my introduction to Arthur, long before I felt even remotely ready to submit to him. We got to know each other a little bit, in that halting and limited Facebookish way, and I was striving mightily to maintain boundaries and not virtually hurl my manuscript in his face when he sent me a non-Facebook email and requested it! I sent it, despite my still-unagented state.

Shortly thereafter I registered for the 2010 SCBWI Summer Conference, realized Arthur was teaching an intensive class, and dreamily contemplated the mysterious workings of the universe as I signed up for it.

I was nervous about meeting Arthur, but not nearly as nervous as I would have been if we hadn’t already established an embryonic relationship online. I mustered up the nerve to suggest we get a cup of coffee and chat, which we did. He was every bit as kind, funny, and engaging as I’d been told, and we hit it off in a way that’s actually very rare for me.

The day after the conference I got an unexpected call from my agent, Ammi-Joan Paquette, and the rest, as they say, is history.

My respect and admiration for his editorial skills are stratospherically high, of course, but my fondness for him as a person and a friend are equally high. Working with Arthur has easily been the most enjoyable and fulfilling experience of my professional life.