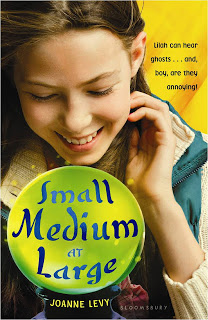 Joanne Levy on Small Medium at Large (Bloomsbury, 2012). From the promotional copy:

After she’s hit by lightning at a wedding, twelve-year-old Lilah Bloom develops a new talent: she can hear dead people.

Among them, there’s her over-opinionated Bubby Dora; a prissy fashion designer; and an approval-seeking clown who livens up a séance.

With Bubby Dora leading the way, these and other sweetly imperfect ghosts haunt Lilah through seventh grade, and help her face her one big fear: talking to—and possibly going to the seventh-grade dance with—her crush, Andrew Finkel.

Yes, I am surprised to be debuting in 2012, because I (very naively) thought it would have happened a lot sooner. Like several years sooner. And quite honestly, if I’d known at the beginning that it would take this long, I’m not sure I would have even started writing.

True story: I recently remembered that a friend and I went to see a psychic many years ago—I think it was about when I was writing my first book—and I asked if I would ever be published. The lady said yes, but only after a lot of rejection and it would take about 13 books.

I laughed and looked at my friend and said something to the effect of, “Yeah, like I would bother writing thirteen books with no results.”

Needless to say, I dismissed the psychic’s prediction (a good thing, methinks), and forgot all about this until recently.

Well, my publishing journey is definitely not one of those straight roads, but when I add up all the books, Small Medium at Large was the 13th book I wrote.

And it’s about a medium.

Anyway, there were a lot of bumps in the road and there were many times I wanted to quit, but I’m stubborn and the harder it got, it seemed the more determined I became. I felt I was a good enough writer to get published (most days—who doesn’t have days filled with crushing doubts?) and I was willing to work on my craft to get even better.

It was just a matter of writing the right book to get into the right editor’s hands at just the right time. Seems like an easy enough thing to do, right?

Well, not so much, but it did happen eventually.

From starting my first book to publication date, my journey has spanned over eleven years, sixteen books written (like I said, it hasn’t been a straight road) and over a thousand rejections from agents and editors. Which brings me to the last part of the question—how did I keep the faith.

Well, I won’t lie and say I faced each day with a smile and a basket full of optimism. By the time the offer finally came, I’d pretty much given up and hadn’t written anything new in about a year because it felt pointless. I’d lost the joy that comes from writing because I was focused only on the prize of being published.

And yes, it would have been healthier to focus on the writing and getting fulfillment just from that, but I couldn’t. My dream was to be published, to share my stories with the world, and that dream was being crushed daily when either I didn’t hear from my agent or I did hear, and it was bad news.

We had an offer.

It had all fallen into place somehow, and I was going to be published.

You’re probably not buying that based on this blog post so far, but you’re going to have to trust me on this one.

I’m funny. Really, I am. It feels weird talking about it, but I have been known to be a bit of a class clown, doing just about anything to get the validation of laughter from others.

How do I decide what’s funny?

Well, I wouldn’t call it a serious decision-making process; I use my instinct to know what’s funny.

If something makes me laugh, then chances are, it will make other people laugh, too.

I think I have a knack for having good timing, which is that nebulous thing that actors and stand-up comedians talk about that make the difference between jokes landing well and jokes flopping to the sound of crickets chirping.

I’m not sure if timing is something you can learn or if you just need a good ear for it, so I’m going to talk here about a couple of other elements that I use to make things funny that I think you can work at.

As a kid, I enjoyed watching “Three’s Company” for Jack’s physical antics (am I dating myself?).

“Seinfeld” was popular for the same kind of thing from Kramer, a master of physical comedy. There are lots of opportunities for physical laughs.

For example, in my book, Small Medium At Large, the main character, Lilah, is in Sears buying her first bra with the help of a couple of old-lady ghosts, (which is a funny scene on its own), but then after she makes her purchase, she drops it in front of her mega crush that she’s just run into.

Goodness. Can you imagine being twelve and dropping your first bra in front of the boy you’re crushing all over? Of course, it happens in slow motion right before your eyes and you’re completely powerless to stop it. And then the boy reaches down to pick it up for you…

Which brings me to another thing that I regularly mine for laughs: humiliation. I think we bond with our characters when we see them in humiliating situations that we can relate to.

Poor Lilah is horrified that she has dropped her bra in front of her crush, but let’s be honest; it’s pretty funny, too. And she doesn’t react very well, tearing out of the store and leaving her dad behind. Then she has to explain to her dad who the boy was = more humiliation.

Snappy dialogue is another way to get laughs and endear your characters
to your reader. I love nothing more than witty banter between
characters, especially when they’re razzing each other, showing both
their intelligence and senses of humor. I think you need a good ear for
great dialogue, so I like to listen often to people talking to make
sure I get that back and forth cadence of banter. A Starbucks
(particularly one near a high school at lunchtime) is great for this
exercise.

But I think the best advice I can give to those looking to write funny, is try not to work too hard at it. You’ve seen that guy at parties who tells jokes badly or tries so hard to make a story funny, but everyone around him looks like they just want to crawl away. Don’t be that guy.

Be critical of your work and get a trusted critique partner to tell you the truth about if your jokes are landing the way you want them to.

I think everyone has their forte, what they’re good at writing, and if you are good at funny, do funny. It took me a while to realize I’m better at funny than I am at serious, issue stuff. But that’s okay because making people laugh is pretty darn validating.

Joanne Levy’s love of books began at a very early age. Being the
youngest and the only female among four children, she was often left to
her own devices and could frequently be found sitting in a quiet corner
with her nose in a book.

After much teenage
misadventure, Joanne eventually graduated from university and now spends
her weekdays as an executive assistant at one of Canada’s big banks
planning meetings and thwarting coffee emergencies. When Joanne isn’t
working, she can usually be found at her computer, channeling her
younger self into books.