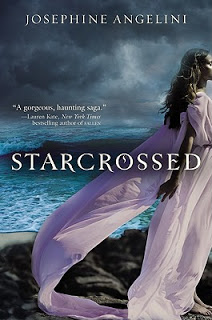 Enter to win a signed copy of Starcrossed by Josephine Angeline (HarperTeen, 2011). Eligibility: U.S. only. From the promotional copy:

How do you defy destiny?

Helen Hamilton has spent her entire sixteen years trying to hide how different she is—no easy task on an island as small and sheltered as Nantucket. And it’s getting harder.

Nightmares of a desperate desert journey have Helen waking parched, only to find her sheets damaged by dirt and dust.

At school she’s haunted by hallucinations of three women weeping tears of blood . . . and when Helen first crosses paths with Lucas Delos, she has no way of knowing they’re destined to play the leading roles in a tragedy the Fates insist on repeating throughout history.

As Helen unlocks the secrets of her ancestry, she realizes that some myths are more than just legend. But even demigod powers might not be enough to defy the forces that are both drawing her and Lucas together—and trying to tear them apart. 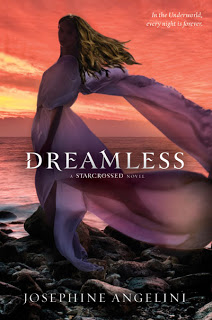 Look for Dreamless by Josephine Angeline (HarperTeen, 2012). From the promotional copy:

Can true love be forgotten?

As the only scion who can descend into the Underworld, Helen Hamilton has been given a nearly impossible task.

By night she wanders through Hades, trying to stop the endless cycle of revenge that has cursed her family. By day she struggles to overcome the fatigue that is rapidly eroding her sanity.

Without Lucas by her side, Helen is not sure she has the strength to go on.

Just as Helen is pushed to her breaking point, a mysterious new Scion comes to her rescue. Funny and brave, Orion shields her from the dangers of the Underworld. But time is running out–a ruthless foe plots against them, and the Furies’ cry for blood is growing louder.

As the ancient Greek world collides with the mortal one, Helen’s sheltered life on Nantucket descends into chaos. But the hardest task of all will be forgetting Lucas Delos.

Josephine Angelini’s compelling saga becomes ever more intricate and spellbinding as an unforgettable love triangle emerges and the eternal cycle of revenge intensifies.

Eagerly awaited, this sequel to the internationally bestselling “Starcrossed” delivers a gritty, action-packed love story that exceeds all expectations.