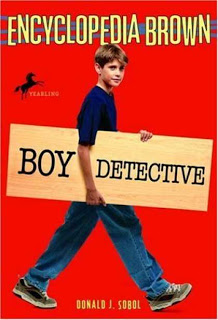 Donald J. Sobol Dies, Author Wrote Popular Encyclopedia Brown Series by T. Rees Shapiro from The Washington Post. Peek: “Mr. Sobol was a newspaper reporter in New York before embarking on a literary career in the late 1950s. He wrote more than 60 children’s books on topics as varied as Medieval knights, the American Revolutionary War and the Wright Brothers.”

Donald J. Sobol, Creator of Encyclopedia Brown, Dies at 87 by Denise Grady from The New York Times. Peek: “…translated into 12 languages and have sold millions of copies worldwide…. He continued to write every day until a month or so before his death, his son said. The 28th book in the series, Encyclopedia Brown and the Case of the Soccer Scheme, is to be published in October.” Note: the first Encyclopedia Brown book was published in 1963 “after being rejected by two dozen publishers.”

One thought on “In Memory: Donald J. Sobol”