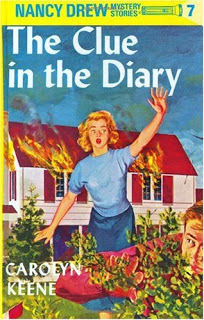 First, a little quiz from the Queen of Sequels, Carolyn Keene and her minions:

Match the character name to the description:

____ a. pleasantly plump with a motherly expression

And, all together now: What car did Nancy drive?

I remember giggling with my girlfriends over the repeated phrases in Nancy Drew novels as Keene reintroduced characters we had met in five, ten, maybe 20 previous books. We could each recite the epithets that we were sure to find in the first two or three chapters before the mystery really got going. 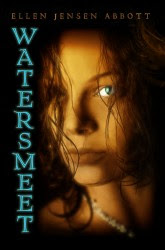 I’ve been thinking a lot about this technique—and secretly longing to use it—as I wrote my own sequel to my debut novel, Watersmeet (Marshall Cavendish, 2009). Sequels are everywhere these days, and readers seem hungry for them. One of the most common questions my writing friends and I get asked is, “Will there be a sequel?”

But the “slightly plump, pretty girl” (poor Bess, seen reaching for a “third sandwich” on the first page of The Clue in the Diary) was not going to work for my sequel.

Nancy Drew is a static character living in a sort of Ground Hog’s Day of middle grade literature. She’s always just gotten the blue convertible for her birthday, it’s always summer, and she’s always about seventeen. This can be comforting for a reader. You know exactly what you’re going to get when you pick up a Nancy Drew mystery.

But in The Centaur’s Daughter (Marshall Cavendish, 2011), the sequel to Watersmeet, the seasons have changed; Rueshlan, the shape-shifting leader of Watersmeet, is dead; and my main character, Abisina, has become a full-fledged young adult.

She has to ask herself who she wants to be now: Can she be the leader her father was? Can she keep her new home, Watersmeet, from being destroyed? And how does she feel about that guy, Findlay, who had always been just a friend?

The art of writing a sequel came down to one essential question for me: How do I handle backstory? Readers who read Watersmeet want to be reminded of important events in the first novel but don’t want to re-read it. New readers need to know enough to follow the events of this novel without feeling like they came late to the party and are missing all the inside jokes.

I tried several techniques and read a lot of sequels to figure out how to strike the right balance. 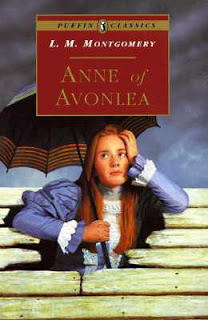 How jealous I was when I read the following line in L.M. Montgomery’s Anne Of Avonlea (L.C. Page, 1909): “Both girls laughed over the old memory…concerning which, if any of my readers are ignorant and curious I must refer them to Anne’s earlier history.” (The ellipsis is Montgomery’s!)

But I didn’t think I should do that. My novels are fantasy novels, and to allude to the fact that they are crafted novels sold in bookstores or online pulls the reader out of the moment of the novel and reminds them that it’s 2011 and they have homework to do or a text to send.

The same was true for character descriptions. I would have loved to go back to Watersmeet and recycle my descriptions of Icksyon, the maniacal centaur who tries to kidnap Abisina. After all, I had worked hard to get just the right words and images when I described him initially. How could there be another set of “right” words and images? At the same time, it didn’t seem fair to my returning readers to recycle from the first book.

The most important lesson I learned was when I teamed up with a writer friend who was also writing a sequel. Neither of us had read each other’s first books so were perfect “new” readers: We agreed to read drafts of the sequels, telling each other where we needed more information and where we were overwhelmed with backstory.

Because she was on a different schedule for her book than I was, we only managed to trade pages once, but I learned two important lessons. In reading her early draft, I hit blocks of backstory that I found frustrating as a new reader. I wanted to say, “Get on with it already! I know you wrote another book, but I’m reading this one!” I held onto that feeling as I waded into my own sequel.

At the same time, when I pointed out the backstory to this writer, she talked about how it helped her see how parts of the story fit together, even as she knew it need to be cut. Another lesson to hang on to. 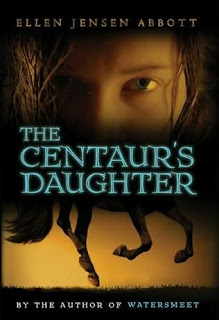 In my early drafts of The Centaur’s Daughter, I just let myself go. My approach has always been to put it all out there, then cut, cut, cut, so I decided to do that with my backstory as well. To some extent, all novelists do this. We know so much more about our characters and settings than ever shows up in the final draft.

(Thank goodness! I could bore you to extinction with details of the world of Seldara. Do you really need to know the step-by-step process of drying and grinding cattail reeds into bread flour?)

My first draft of The Centaur’s Daughter clocked in at 423 pages, the last draft at 295. And some vast proportion of the 128 pages I cut was backstory.

To some extent, this was unavoidable. I didn’t know exactly where my story was going when I started, even though I thought I did. But on later reads, it became very clear what story I was telling and where to weed out extraneous backstory.

Of course, it helped that I had a great editor.

And yes, I did find sentences or phrases as late as my final read that I had to cut.

There is ego involved, too. Let’s say I include some backstory from a bit I think was particularly cool or inventive or interesting in my first book. I am less likely to see that it’s unnecessary, because I like it. I read it again, and I think, “Oh yeah. There’s that great bit!”

Again, that’s where your editor—and hopefully your own sense of proportion—comes in.

So as I look back—and if I were to give advice to someone contemplating writing a sequel—I would say this:

This backstory struggle was worth it because there are many rewards that come with sequel writing. Writers often talk about their characters as if they were their children. A sequel allows you to watch these characters grow and develop—at times in very surprising ways.

In The Centaur’s Daughter, I got to be there for my main character’s first kiss! (Do you think my kids would ever let me do that?) I got to see her grow up and develop the leadership qualities and courage that was just budding in her at the end of Watersmeet.

Stopping after one book can feel like sending your child to boarding school when she is eight or nine. With a sequel, you can at least get her through adolescence.

5 thoughts on “Guest Post: Ellen Jensen Abbott on The Pain in the Backstory”