Shayne Leighton is the first-time author of Of Light and Darkness (Book 1: The Vampire’s Daughter) (Decadent, 2011). From the promotional copy:

When one human stands before an army of impossible obstacles, the likelihood of overcoming them in this coming-of-age modern fairytale may result in war between light and darkness.

Abandoned as an infant in Prague, naive and strong-willed Charlotte Ruzikova was raised by one of the last vampires left alive. As a human, she knows no other home than the one nestled deep in the woods of Eastern Europe, where witches drew spells of enchantment, phasers threw tea parties, and elves are the closest in kin.

Charlotte has lived her life in the dark with her guardian, content to having him to herself and reveling in his attention, until she’s realizes she wants more…

Resident medical doctor and vampire, Valek Ruzik fears the day his ward would come of age and blossom into a fine woman, and he is forced to confront his own motives as time is of the essence once his past catches up to him, and their lives become endangered…

As genocide and war threatens their secret society, the dictator in power is ready to wipe out Valek’s race, but Charlotte will not allow that to happen. Fighting for the only one she’s ever loved and truly believed in, she will do whatever it takes to save their love…before the sun comes up and light takes over.

I began writing Of Light and Darkness (Decadent, 2011) when I was sixteen years old and in high school. At sixteen, you think you know everything. I remember writing several pages when I probably should have been paying attention in class, sharing them with my friends, and since the feedback I was getting was so positive, thought I was the greatest thing since sliced bread.

Of course, I’m (mostly) joking. I knew I wasn’t anywhere near the greatness of sliced bread yet. But when I set out on this story, I loved the quirkiness of the characters and the plot so much, I knew this was the first novel I would finish. I made a decision that someday this would be published. I just wasn’t aware of how much work would be involved!

My pre-contract revision process was sort of like finding your way through a dark room with a dim flashlight. I could sort of tell that a lot of things needed to be fixed, and I tried my best to fix them. But being a young writer with no formal training or experience, the “how-do-I-fix” was the hardest part.

I consider Cynthia Leitich Smith my biggest mentor throughout writing this manuscript. In the really early stages, I sent her my opening pages, and she wrote back with tons of encouragement. She recommended that I get a beta reader, which was the best advice she could have given me at that point.

I had many of my friends and family members beta read.

For any writer starting out, that is the best advice and I can lend as well. Get people to read your book. (The best are people you don’t know because then they can give you an unbiased opinion.) It will change your outlook. It changed mine.

But the real shock didn’t occur until my post-contract revisions began and Decadent Publishing assigned me my brilliant editor, Barbara Sheridan! (Terry Bruce was also a huge help and support and always on stand-by.) It wasn’t until this point, that I saw my manuscript as it was–a great story that needed a lot of tweaking.

These wonderful ladies shed light on everything I was missing. There were so many head-hops (point of view shifts) from paragraph to paragraph, unneeded scenes, slow moments, and other technical issues. They became my teachers.

Yes, it was painful to nix some things, but in the end, the story shines brighter. 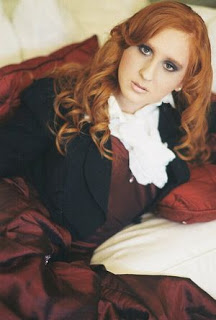 I had a lot of help and inspiration from my husband who hails from the Czech Republic, where this story takes place.

Building the magic in this setting came easily, because Czech’s rich history and culture go back a long way and are shrouded in mystery. Prague provides the perfect backdrop for vampires, wizards, and other creatures of the night.

Since I was a very little girl, I always loved fairy tales, and I was introduced to fantasies early.

I pulled my mythical objects, words, and events from every culture and story. I went the library and read about mythologies and legends, looked up the meanings of various symbols.

The research for building the Of Light and Darkness world took months, and I continued it throughout my writing process.

I write whenever I get the chance and something inspires me. I always carry around a small pad of paper and a pencil. I’ll write in the middle of coffee shops, book stores or at home after everyone has gone to bed.

Of Light and Darkness is my absolute favorite story that I’ve come up with so far, and I have a lot planned for the series’ future.

2 thoughts on “New Voice: Shayne Leighton on Of Light and Darkness”