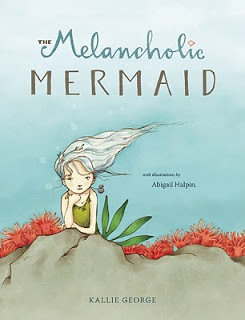 Kallie George is an author, editor and speaker living in Vancouver, B.C., near the sea. She is the co-creator of the award-winning Simply Small board book series, and author of the art book, Mr. M: The Exploring Dreamer (Red Leaf) and author of the picture book, The Melancholic Mermaid (Simply Read).

She has her Masters of Children’s Literature from the University of British Columbia. She loves picture books, fairy tales, beautiful art and music, and baking cookies.

Abigail Halpin is an illustrator living in beautiful (albeit snowy) New Hampshire. Her illustrations are a blend of traditional and digital media, mixing watercolor, ink, pencil, scanned textures, typography and more.

Most recently, her illustrations appeared in The Grand Plan to Fix Everything by Uma Krishnaswami (Atheneum, 2011). She is inspired by all things vintage, good music and strong coffee.

Kallie, what was your initial inspiration for the book?

My dad used to tell me fairy tales about me when I was little. As I grew up and began creating my own stories, he helped me bring them to life—editing them with me, helping me with ideas, and even, when I was in elementary school and high school, he helped self-publish them for me so I could give them out as Christmas presents. So it is no surprise that he is the inspiration behind this story.

It happened like this: I was really upset about something–I can’t remember exactly what now–and he took me to White Spot (a non-glamorous restaurant) for a coffee and ice cream pick-me-up. But it didn’t work. I began to cry about whatever I was upset about.

In an attempt to distract me, he asked me this question: “If I were a mermaid, would I be crying?” (He knew how much I loved–and still love–mythical creatures.)

I replied that I didn’t think so, because mermaids live in water so their tears would just become part of the ocean… But then I thought maybe mermaids’ tears would be bubbles.

I was excited by the visual image of a mermaid crying bubbles and I began doodling and writing down the idea on the restaurant napkin and I was completely distracted. My dad’s plan had worked! Little did he know it would become this book!

To both, could you describe the book in your own words?

K: That’s a tough question! Basically, it’s a fairy tale for older kids (either to read themselves or to be read to over a couple nights), about two misfits accepting themselves, finding each other and discovering friendship. To me, it’s also a book about getting stuck in sadness and finding the strength to pull oneself out of it.

Maude is sad/melancholic because she is teased because she is different. Ultimately, nothing can rescue her–not even her new friend Tony, until she takes charge of her own life and rescues herself.

Kallie, could you describe your writing process? How did the text evolve over time?

K: I am a strong believer in editing—especially since I am an editor myself! I had so much help honing the story. First, from my dad, then from my classmates in the UBC children’s book creative writing class. And I had one of my best friends, and my writing soulmate, Vikki Vansickle look over it. We email work back and forth every month, and it keeps us focused and motivated. Finally, I had the marvelous help of Tiffany Stone, who is one of the best picture book editors around. So… I had a ton of help making it the story it is now.

I would say, however, that the fundamental parts of the story and even its structure didn’t change much throughout the editing process.

One thing that was a bit of a struggle was to make Maude a little less of a passive character. This was hard because she is depressed, after all, until the end of the story. Something quite major that changed was that at, one point, Tony’s mitten was caught under the rock and Maude rescued it when Tony is cleaning the tank (instead of Tony’s webbed hand being caught under the rock). I made that change on the advice of Tiffany to give the scene more impact.

Abigail, how did you come to connect with the manuscript? What drew you to Kallie’s text?

I was contacted by Dimiter Savoff, the publisher at Simply Read Books. He asked if I was interested in illustrating a story about a mermaid.

One read through the manuscript, and I knew the answer was yes. I’ve lived most of my life near the ocean, so was immediately drawn to the story Kallie had written. And Maud and Tony’s struggles to fit into the world really spoke to me, because I think at one time or another, we all feel like the odd man out, the one that just can’t fit in.

Abigail, could you please describe your illustration process?

My illustration process for The Melancholic Mermaid involved reading the story through a few times, after which I let it percolate in my head for awhile. There was so much terrific imagery to work with in the story, that it was tough to narrow down what I wanted to illustrate.

I spent a lot of time researching the circus, ocean life and mermaids in folklore, so that I’d have a visual vocabulary to reference. From here, I worked on sketches, refining, then final art.

For the final art, I did pen and ink drawings with watercolor. These illustrations were then brought into Photoshop, where I built up more colors and shading digitally.

Kallie, how did Abigail’s art expand your vision?

Also, I never concretely placed the book in the 1930s era, but I love that era and Abigail’s art and especially the clothing of the characters created such a sense of time and place.

Also a very funny thing happened because of Abigail’s art—it helped me overcome my fear of owning a fish.

The fear began because when I was young I had a pet fighter fish that died tragically.

I came home one day from school, and I thought the fish was dead because it wasn’t moving at all. I even poked it a few times with my pencil trying to get it to move, but it wouldn’t.

I had heard somewhere that when a fish dies you flush it down the toilet, so I took my fish bowl to the bathroom, dumped it in the toilet and flushed.

Just when the water began to spin down… my fish began to swim up! I was so startled I couldn’t do anything except watch, horrified, as my fish was sucked away. I couldn’t get over how I had flushed away my live fish!

I hadn’t bought a fish since, until I saw the cute pictures of the little red fish that seem to hang around Maude in Abigail’s illustrations. My boyfriend liked the fish, too, and he decided to make it the star in the animation he made for me for the book trailer… and then he and I decided to actually buy a little red fish. We named him Jupiter (Jupi for short).

To both, do you have any mermaid-related memories? 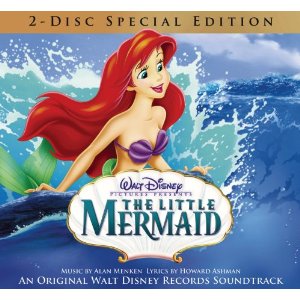 K: Like many girls, when I was young I would spend much time in the pools and ocean pretending to be a mermaid.

But probably my most vivid memory of mermaids is seeing Disney’s “The Little Mermaid.” It was the first movie I remember seeing in the theatres. I think that the first movie you see in the theater is a big thing. I was with my mom. I remember we both cried at the end. I also vividly remember seeing soon after that an animation/movie of the real The Little Mermaid story when I was with my aunt and uncle—I was very scared at the end when the mermaid turned to foam.

A: Growing up near the ocean, an awareness of mermaids was inevitable. I remember making sand mermaids at the beach, decorating them with seaweed hair and shell-studded tails. And I was absolutely mesmerized by Disney’s “The Little Mermaid” when that came out.

To both, what is it about mermaids that fascinates us so much?

K: I think there are many reasons people are drawn to mermaids: their beauty, their danger (as some folktales say, mermaids songs lure fishermen to death), their ability to live underwater. One reason, too, is that they are misfits. They are neither human, nor fish. I am personally attracted to characters that are misfits as I have often felt like a misfit myself (bookish, too bubbly). I think that most people are attracted to misfit characters, because most people, at one point or another, feel like they don’t fit in. Of course, I made Maude even more of a misfit—she is a misfit among mermaids.

A: The ocean is this beautiful, magical expanse, but at a moment’s notice can become terrible and deadly. The idea that this delicate, mythical creature could inhabit such a volatile environment really captures the imagination. And then there’s the whole being-able-to-swim-under-water thing that appeals to anyone who’s ever tried to hold their breath for longer than 30 seconds!

To both, what do you do when you’re not writing/illustrating?

K: Too many things! Mostly I edit and teach kids creative writing, and I love to read (no surprise there).

In the summer I teach a lot of creative writing camps for kids. I also love, love, love yoga and spending time outdoors, baking and hanging out with my boyfriend. We spend a lot of time being kids: making up goofy songs, dancing around the house, watching kids’ movies, building pirate ships and papermache sea creatures (in particular a seahorse named Poky).

A: Outside of illustrating, I am a die-hard knitter and love to sew (especially vintage patterns). I’m also a big reader, with a weakness for graphic novels and old whodunits.

To both, what can your fans look forward to next?

K: I have a few projects in the works—one is an early reader series, the other is story in a similar fairy-tale vein as The Melancholic Mermaid but it is about winged horses. I see a lot of magical creatures in my future at this moment!

A: I’ve just finished final art for Andrea Cheng‘s The Year of the Book, (Houghton Mifflin Harcourt, 2012). It’s a lovely story and I’m very excited about its release next year.

Don’t miss the animated book trailer for The Melancholic Mermaid.