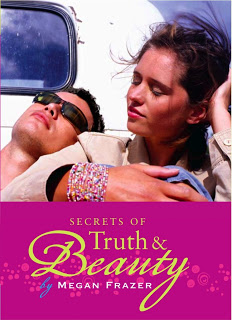 Megan Frazer is the first-time author of Secrets of Truth & Beauty (Hyperion, 2009). From the promotional copy:

When Dara Cohen was little, she was a bright, shiny star. She was the cutest seven-year-old who ever sang Ella Fitzgerald, and it was no wonder she was crowned Little Miss Maine.

That was then. Now Dara’s seventeen and she’s not so little anymore. So not little, that when her classmates find out about her illustrious resume, their jaws drop. That’s just one of her many problems. Another is that her control-freak mom won’t get off her case about anything. Yet the one that hurts the most is the family secret: Dara has an older sister her parents tried to erase from their lives.

When a disastrously misinterpreted English project lands her in the counselor’s office–and her parents pull her out of school to save face–Dara realizes she has a decision to make. She can keep following the rules and being misunderstood, or she can finally reach out to the sister she’s never met–a sister who lives on a collective goat farm in Massachusetts. Dara chooses B.

What follows is a summer of revelations, some heartbreaking, some joyous; of friendship, romance, a local beauty pageant; and choices. And as autumn approaches, Dara finds she may have to let go of everything she’s taken for granted in order to figure out who she really is, and what family really means.

Could you tell us about your writing community–your critique group or partner or other sources of emotional and/or professional support?

When I first started writing Secrets of Truth & Beauty, I was living in the Boston area. For a year or two, I had been a part of the Boston Writer’s Workshop. It was a very eclectic goup. We were writing literary fiction, sci fi, personal essays, zombies- you name it.

Actually, one of the other members, Kate Racculia, recently signed with an agent, and I expect to hear news of her sale soon.

Anyway, I had been working on a literary novel for adults when I decided to try writing YA. The group could have been dismissive of YA, since that prejudice still exists, but they were not at all. Some of the members, especially the guys in their late twenties, really weren’t sure what was “okay” for young adult literature. I told them to treat it just like anything else brought to the group, and we were great from there.

Part way through writing the novel, I moved to Maine. I kept in touch with Kate, and she read a complete draft for me, which was immensely helpful.

When I sold, I emailed the group, and they were so supportive. I am still on their email list and love to hear what is new with them. But I needed a new community.

Online I found the 2009 Debutantes. The Debs are great because it’s a group of other YA and middle-grade authors who are going through the same things I am. It’s wonderful to be able to ask questions, share triumphs, and commiserate over setbacks with people who really get it.

I still wanted an in-person connection though. On Cynsations I read about Austin’s Delacorte Dames and Dude, a group of Delacorte authors all in Austin.

I knew there were a bunch of YA and middle-grade authors in Maine, including fellow Deb Deva Fagan (author of Fortune’s Folly (Henry Holt, 2009)(new voice interview)), so I contacted them, and we have met a couple of times.

This is more shop talk than a workshop, and again it is very comforting. We are all in different stages of our careers, so that is very useful. It’s nice to actually be able to give some advice, as well as to receive it.

Technology was both a boon and a challenge in writing Secrets of Truth & Beauty. Dara needs to find her older sister. With the advent of the Internet, this hunt can take place in the space of a few paragraphs. Before the Internet, it might have taken a whole chapter. She has some pieces of information, puts them into Google, and there’s Rachel!

Having her own cell phone was also a help because she can make the phone calls she needs to arrange the visit in relative privacy–no concern about not having a phone in her room or her parents picking up the other line.

On the other hand, I needed Dara to be somewhat isolated once she got to Jezebel Goat Farm. She goes there willingly, but if she can be in constant contact with her friends when things get tough, well then that would be a very different–and far less interesting–story. How Dara spent a summer texting her friends and checking her MySpace page. Not exactly riveting, and not exactly transitional for Dara.

Fortunately, I had already sent her best friend off to Belgium, and Jezebel is located in a small, remote town, so it was conceivable that there was no Internet. I took it away for the sake of the story. I did need to address the issue, though. I couldn’t just have their be no Internet; that would ring false to many teens. So Rachel specifically apologizes for the lack of Web access.

While I do think technology needs to be included, trends do change so quickly. I work in a high school, and my students never email their friends. They text all the time. As of the moment that I am writing this, many are migrating from MySpace to Facebook. If they’ve heard of Twitter, most are not impressed, but maybe it will catch on. Or maybe something new will come along.

It would be a risk to make a novel depend on a specific current technology, because it could become passe before the book even is published.

I think Sarah Dessen was smart to create her own social network for Lock and Key (Viking, 2008).

I don’t want to be the old person who thinks she’s with it, but really isn’t.

At the same time I don’t think an over-emphasis on technology is needed. Students tell me they send eighty, ninety, one hundred texts a day. A writer doesn’t need to include each and everyone of them.

Technology is such an integral part of teens’ lives, it’s like eating or going to the bathroom: the readers will assume the characters are doing it even if it’s not on the page.