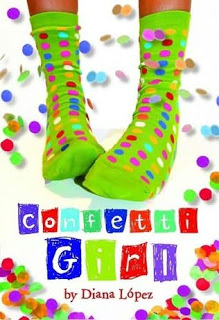 “Confetti Girl is my second book but my debut for the middle grade reader. It’s about a girl named Apolonia Flores, Lina for short. She’s a sockiophile (one who loves socks) whose mother died a year ago. She’s ready to move on, but her father isn’t.

“Meanwhile, she falls in love, verbally combats a bully, gets kicked out of sports, and endures many break-up and make-up scenes with her best friend.

“The book’s called ‘Confetti Girl’ because Lina’s best friend’s mom makes cascarones (confetti eggs) as a coping mechanism after her divorce. Cascarones are a Tex-Mex tradition. You fill eggshells with confetti and glue tissue over the hole. Then on Easter morning (or all during Fiesta if you live in San Antonio), you sneak up to people and crack the eggs on their heads.

“I had just finished visualizing Lina’s home, how her father has so many walls of books. But I was really struggling to find a memorable visual for her best friend’s (Vanessa’s) house.

“Then I noticed a lady in my neighborhood selling cascarones. That’s when it hit me: Vanessa’s mom has a cascarones-making obsession! It’s amazing how one detail can give birth to a whole character. But even so, I was halfway through the book before I realized how symbolically rich cascarones could be.”

“Her work is also featured in Hecho en Tejas, an anthology of Texas Mexican writers, and in journals such as Chicago Quarterly Review, Sycamore Review, and New Texas.

“She lives in San Antonio where she teaches English at St. Philip’s College.”