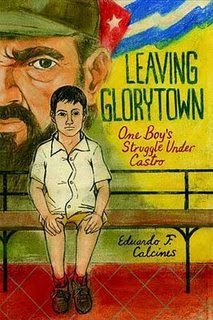 Eduardo F. Calcines is the first-time author of Leaving Glorytown: One Boy’s Struggle Under Castro (FSG, 2009). From the promotional copy:

Eduardo F. Calcines was a child of Fidel Castro’s Cuba; he was just three years old when Castro came to power in January 1959.

After that, everything changed for his family and his country. When he was ten, his family applied for an exit visa to emigrate to America and he was ridiculed by his schoolmates and even his teachers for being a traitor to his country. But even worse, his father was sent to an agricultural reform camp to do hard labor as punishment for daring to want to leave Cuba.

During the years to come, as he grew up in Glorytown, a neighborhood in the city of Cienfuegos, Eduardo hoped with all his might that their exit visa would be granted before he turned fifteen, the age at which he would be drafted into the army.

In this absorbing memoir, by turns humorous and heartbreaking, Eduardo Calcines recounts his boyhood and chronicles the conditions that led him to wish above all else to leave behind his beloved extended family and his home for a chance at a better future.

After many years of laboring and writing my story about growing up in communist Cuba and looking for an agent, I was able to find a wonderful agent, Doris Booth, who believed in my story. This led to finding a great editor, William Kowalski, and finally selling the book to FSG.

I love everything about being a published author, considering how difficult it is to publish a book at this level! In terms of challenges, after surviving the final part of the book editing process, nothing is a challenge!

The biggest surprise was Edel Rodriguez‘s illustration of the book cover. The illustration’s brilliance and impact is exactly what I had always envisioned it would look like.

The inspiration was clear for me. I felt that the free world needed to understand the oppressive and destructive impact that Castro’s regime brought upon a good people.

The fascinating thing to me is how amazingly delightful the writing process is. Through the long journey of telling my story, I re-visited areas of my heart and opened doors to my soul that I thought had closed forever. There were times when I cried uncontrollably and laughed uncontrollably.

Best of all, I relived precious moments of my childhood. The reason I wanted to offer more information to young readers is that there had never been a book written about the first ten years of Castro’s communist regime from a child’s/young person’s perspective.

The birth of our sons was God’s greatest gift to me. It was as if He was granting me another chance at a happy childhood, and happy it was!

While the boys were growing up, Papa had to tell them stories about his childhood in Cuba. I never revealed to them the dark side of dealing with the harsh treatment of the newly established government. Instead, I told them stories of those special moments my friends and I had in those endless days under the sun.

It was through those special moments during our son’s first ten years that I refined my storytelling ability, and eventually, Leaving Gorytown surfaced naturally as a book for young readers. The greatest thing is that the book is being recommended in the educational arena.

In a starred review, School Library Journal said, “Calcines’s spirited memoir captures the political tension, economic hardship, family stress, and personal anxiety of growing up during the early years of the Castro regime in Cuba.”

Booklist said, “Calcines’ vibrant writing gives readers an intimate, front-porch view of his family…will captivate readers and open a door to a subject seldom written about for teens.”