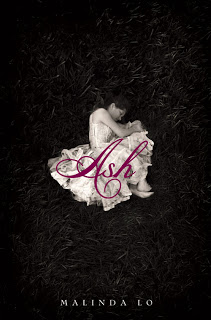 Malinda Lo is the first-time author of Ash (Little, Brown, 2009). From the promotional copy:

In the wake of her father’s death, Ash is left at the mercy of her cruel stepmother. Consumed with grief, her only joy comes by the light of the dying hearth fire, re-reading the fairy tales her mother once told her. In her dreams, someday the fairies will steal her away, as they are said to do.

When she meets the dark and dangerous fairy Sidhean, she believes that her wish may be granted.

The day that Ash meets Kaisa, the King’s Huntress, her heart begins to change. Instead of chasing fairies, Ash learns to hunt with Kaisa. Though their friendship is as delicate as a new bloom, it reawakens Ash’s capacity for love—and her desire to live. But Sidhean has already claimed Ash for his own, and she must make a choice between fairy tale dreams and true love.

Entrancing, empowering, and romantic, Ash is about the connection between life and love, and solitude and death, where transformation can come from even the deepest grief.

Ash has gotten a lot of attention because it is a lesbian retelling of Cinderella. But my first draft had nothing gay about it–Ash, the main character, fell in love with the prince.

After I got some feedback from a friend, I realized that Ash was actually much more interested in one of the female characters, the huntress. That realization was startling to me; I had written all of that into the story without even consciously knowing it.

When I began work on my second draft, I thought long and hard about whether I wanted to turn the story in that direction. Did I truly want to write a “lesbian Cinderella”?

The concept of a “lesbian Cinderella” was certainly edgy, but I knew that if I committed to that idea, I would need to work very hard to make sure it didn’t turn out to be laughable.

I decided, through many drafts (on my own and with the help of my editor), that the world of Ash does not contain homophobia. People in this world simply love whomever they love. Obviously, people are more likely to be straight, but there is a long history in this world of same-sex love, and nobody bats an eye.

That enabled me to write Ash as a true fairy tale, rather than a coming-out story. Ash simply falls in love with her Prince Charming–in her case, this person just happens to be a woman.

I think that my decision to normalize same-sex relationships in this world was absolutely the right one. Basically 99% of the feedback I’ve been getting–from gay and straight people alike–is that they appreciate the fact that a girl gets to fall in love with a girl, and it’s not only okay, it’s wonderful. It’s just as good as falling in love with the prince.

I was an anthropology graduate student when I began working on Ash, so I approached the world-building from an anthropologist’s perspective. I thought a lot about the rituals that mark the turning points in life–birth, marriage, and especially death.

This was particularly important for Ash because the story begins when Ash loses both her mother and father. I studied funerary rituals in China when I was in grad school, and I relied heavily on that knowledge when I wrote about Ash’s parents’ funerals, and when thinking about how people in that world think about death and dying.

Another of the most significant aspects of the Cinderella story is the fact that the stepmother wants her daughters to make wealthy marriages. I read a lot of analysis of fairy tales, and discovered that many tales included stepmothers because mothers often died in childbirth, and fathers were forced to remarry because they needed a wife to help raise the children.

These family structures might set up a situation in which a stepmother is forced to raise both her own children and another woman’s, and in a world of scarcity, this naturally sets up a kind of competition.

For girls, marriage was basically their ticket to freedom–a girl had to marry in order to support herself later in life, and it was to her advantage to marry well.

If a stepmother is raising both her daughter and her husband’s daughter from his earlier marriage, and there are few eligible males around, it might not be surprising that she would favor her biological daughter.

Obviously not all stepmothers are like this! But doing this research helped me to understand why a stepmother might act this way.

So, I guess I thought about the worldbuilding in a fairly intellectual, anthropological way! But then when I wrote, I kind of just loosened my focus and allowed it to become the background–the motivator for characters’ actions. I didn’t bother describing all the rituals or reasonings behind decisions; I focused on how those rules and practices would influence a character’s behavior.

In the following three videos, you can virtually attend Malinda’s book launch for Ash. First, she offers a talk about the book.

Next, Malinda reads from the novel.

Read chapter one of Ash.

Malinda Lo on Making Space for Diversity from Teenreads.com Blog. Peek: “I found myself thinking about it several times, and I realized that what disturbed me wasn’t the idea that some people might be homophobic (this is just basic reality), but the idea that someone would attempt to avoid an entire group of people in their reading material.”