Alana Joli Abbott worked as an in-house editor for three years at Thomson Gale (now Gale Cengage) before taking on the life of a freelance writer and editor.

She is the author of two novels, short stories featured at Coyote Wild, and The Edge of Propinquity, and the Web comic Cowboys and Aliens II.

Along with her personal projects, Alana is the contract editor for the Gale Autobiographies Project, a series of essays by notable authors featured in the ongoing reference series Contemporary Authors, and Something about the Author.

How did you come to your current professional position?

I worked directly at Gale for three years after I graduated college. After moving away from Michigan and out to the East Coast to get married, I eventually started doing some work for Gale as a freelancer. I also do a number of freelance projects for other companies, working on everything from comics to articles about Connecticut history.

I really love the flexibility that comes with managing my own work flow. The variety of projects keeps me interested in everything I’m doing, and I’m always learning something new.

The Gale Autobiographies Project is especially fulfilling, because it gives me the chance to work with prominent writers and also a chance to contact writers I admire and invite them to write autobiographies for the series.

Even when they aren’t available, it’s great fun for me to get in touch with folks I admire, like Melissa Marr and Nancy Elizabeth Wallace. 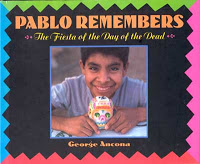 It’s even better when I actually get to work with those writers–Sherwood Smith, whose work I’ve loved since I was a teen, did a wonderful original essay recently, and George Ancona, whose work I’d reviewed for School Library Journal, updated an essay for me that he’d published years ago in one of Gale’s older volumes. Corresponding with authors can really make my day!

One of my biggest challenges with working as a freelancer is time management. Because I like to take on a lot of projects and a wide variety of them, juggling them to make sure they’re all completed on time can be a job in itself!

I also could never get used to the solitary life of a freelancer. To resolve that, I ended up taking a part time job at my local library, which I love — it keeps me in touch with the books people are reading and gives me plenty of face time with other people who love books!

Could you tell us about Something about the Author?

Something about the Author (SATA) is a series that compiles biographical and critical information about children’s writers and illustrators, mixing people who are well into their careers with people whose first books have just come out.

Most of the entries are overviews of the author’s or illustrator’s career, sometimes including a few quotes from the author or illustrator him or herself, talking about their jobs. Volumes of SATA also include longer autobiographical essays that run about 10,000 words.

Award-winners, best-sellers, and other critically acclaimed writers and illustrators are invited to talk about their lives, in their own words. Those essays are placed after the same type of overview, which is called the “sketch,” that make up the rest of the volume.

What is its history?

SATA was first published back in 1971, and since then, the series has included more than 12,000 writers and illustrators. Currently, Gale publishes about twelve volumes per year, and there are almost 200 volumes in print.

Who is the audience?

Because SATA covers authors who write for children and young adults, the sketches are geared toward a grade-school-to-middle-school audience.

School libraries and public libraries are definitely the goal market, since very few families are going to want to keep a reference series on their shelves at home!

What can SATA enthusiasts look forward to next?

I’ve just finished working with Sherwood Smith and George Ancona, so their essays should be available soon (if they’re not in print already).

Herbie Brennan wrote a great original essay for an upcoming volume, and illustrator YongSheng Xuan updated his original essay, so those will both be appearing soon.

Chester Aaron, Jan Adkins, and Carolyn Marsden have all agreed to work on essays for future volumes, and I’m looking forward to working with them!

What do you do outside of your editorial life?

I’m actually quite a gamer –after becoming a freelancer, I expanded into writing for one of my hobbies: Dungeons and Dragons. It’s now both part of my work life and my social life! I also dabble in Wii and X-box games (we still have an X-box, not a 360, but believe me, it’s on our wish list!)

I get the chance to talk about games for a segment on the Secret Identity Podcast with host Brian LeTendre and convention coordinator Max Saltonstall on a semi-regular basis.

I also study kempo karate with my husband.

Over the last several years, I’ve had the chance to do a lot of traveling as a teaching assistant on Professor Mark Vecchio’s mythology study tours in Greece, Turkey, Ireland, and England. Since mythology is a great passion of mine, and I really love to travel, it’s been a great opportunity!

I’m very excited to be interviewed for Cynsations! I’ve been following the blog for quite awhile–it’s one of the resources I love to use when I’m writing sketches for SATA!

I also keep up a blog that you can follow from my Web site or from livejournal–I’m alanajoli.