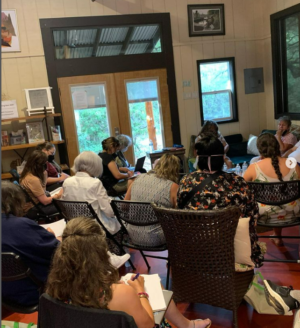 Not too far off the beaten track in Austin, visitors are welcomed to The Writing Barn retreat center, a place where deer wander the meadows, the buildings are air conditioned and rooms are filled with bookshelves. There, thirteen Native participants gathered the weekend of Aug. 4 to Aug. 7 for the third annual We Need Diverse Books’ Native Children’s and YA Writing Intensive.

“I had the most amazing experience at the WNDB Native Intensive,” said participant Cynthia J. Notti (Doyon Limited) after the event. “You are part of a small group of like-minded writers where we shared ideas, worked on our craft, cultivated relationships with other writers and industry experts. It was the kind of experience that one doesn’t get from an MFA.”

Author and faculty member Monique Gray Smith (Cree, Lakota and Scottish) gave a moving and inspirational keynote about the power of words. She welcomed everyone to embrace their inner writer. “There’s always room in the circle,” she said of Native philosophy and reaching a broad audience. “Each person has an important contribution to make with their writing.” 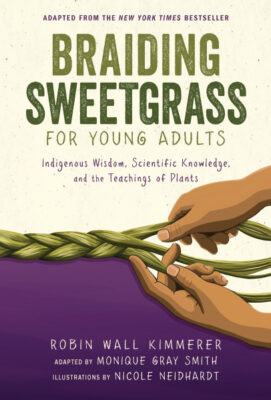 Monique is the author of seven books and this fall two new titles include the YA adaptation of Braiding Sweetgrass by Robin Wall Kimmerer, illustrated by Nicole Neidhardt (Navajo) (Lerner, Nov. 1, 2022) and the picture book I Hope, illustrated by Gabrielle Grimard with Orca Book Publishers (Sept. 13, 2022).

The next morning, Monique interviewed Rosemary Brosnan, vice president and publisher at HarperCollins Children’s Books for twenty-two years. Throughout her career, Rosemary has been committed to publishing diverse voices, launching two imprints: Heartdrum (for Native voices) and Quill Tree Books (for underrepresented authors with a strong point of view).

In the afternoon, participants had the opportunity to have their work critiqued by the faculty (three meetings in all). Those not busy with a critique exchange could write anywhere on the grounds or join the discussions/writing prompts in the Gathering Space. These activities gave Native creatives the chance to apply what they were learning and to get acquainted.
.
“When asked ‘why am I here’ on the first day, I hoped to be part of the wonderful community that Cynthia [Leitich Smith] and her team are building,” wrote Andrea Page (Hunkpapa Lakota, Standing Rock) after the intensive. “I needed guidance on my next steps in my writing journey, and [the faculty] generously provided that support. Writing for kids is such an important responsibility, especially for Native writers today. Cynthia stated it beautifully: ‘Tell the story only you can tell…we [as authors] are in dialogue and communication with young readers.’ Wow, that’s a powerful statement! And that’s a great reason to keep writing the best I can.” 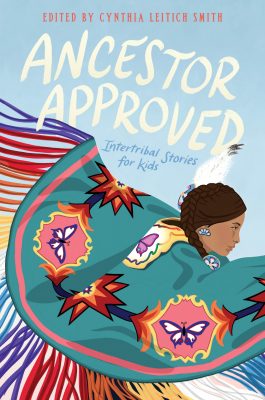 The day ended with Monique interviewing Cynthia, director of the WNDB Native Children’s YA Writing Intensive, a NSK Neustadt Laureate and NYT bestselling author. Her novel Hearts Unbroken (Candlewick, 2018, 2020) won an American Indian Youth Literature Award, and her latest books are Ancestor Approved (Heartdrum, 2021), an ALA Notable, and Sisters of the Neversea (Heartdrum, 2021), which received six starred reviews. Her upcoming YA novel Harvest House (Candlewick) will be released in spring 2023. She is both the author-curator of Heartdrum and the inaugural Katherine Paterson Chair at the Vermont College of Fine Arts MFA program.

“We are in service to children with our writing,” she pointed out. “It’s like a tree trunk. You open it up and in the center is childhood. Every child reader is on a ring of their tree trunk.”

The last morning began with a talk from Thomas and Elizabeth Albert-Peacock, co-publishers of Black Bears and Blueberries Publishing, which specializes in Native books by Native authors and illustrators. Elizabeth is an enrolled member of Red Cliff Band of Lake Superior Ojibwe, and Thomas, a member of the Fond du Lac Band of Lake Superior Ojibwe, as well as an author of a dozen books. They spoke about the evolution of Native publishing, from smaller publishers only looking to publish Native works for children to the current popularity of books published by mainstream presses.

The intensive ended with a Q&A with Adriana Domínguez, an agent with Aevitas Creative Management, and Tara Gonzalez, an Associate Agent at Erin Murphy Literary Agency. Both have a commitment to diverse clients who have diverse stories to tell. They not only gave great tips on how to find an agent, but also how to make an author’s voice stand out.

As the intensive ended, with bags packed, car trips to the airport scheduled and the last goodbyes said, many participants agreed to stay in touch and to build on all they’d learned during an inspiring, skill-building weekend.

“The WNDB Native Writing Intensive was one of the most profound experiences of my life,” Michelle Cronin (Turtle Clan of the Onondaga Nation, New York). “I am forever grateful to have spent four days surrounded by people who share one heart, and one mind.”

Applications for the next WNDB Native Writing Intensive will open in early 2023 for an in-person event at The Writing Barn in late June. HarperChildren’s is a sponsor of the intensive. 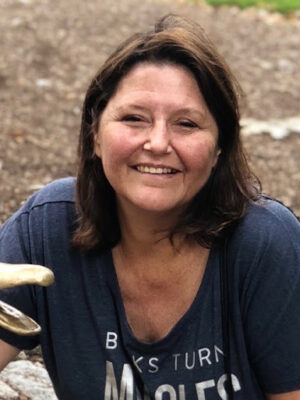 Patricia Morris Buckley worked as a reporter and editor for many years until she followed her passion for children’s books to become an elementary school librarian. She was the Co-Regional Advisor for the San Diego chapter of the SCBWI and teaches Writing for Children 101 for the USD Extension program.

She runs the website NativeAmericanKidLit.com, featuring Indigenous authors and illustrators. She is Mohawk from the Kahnawá:ke Reserve, outside of Montreal. She is a member of American Indian Library Association.