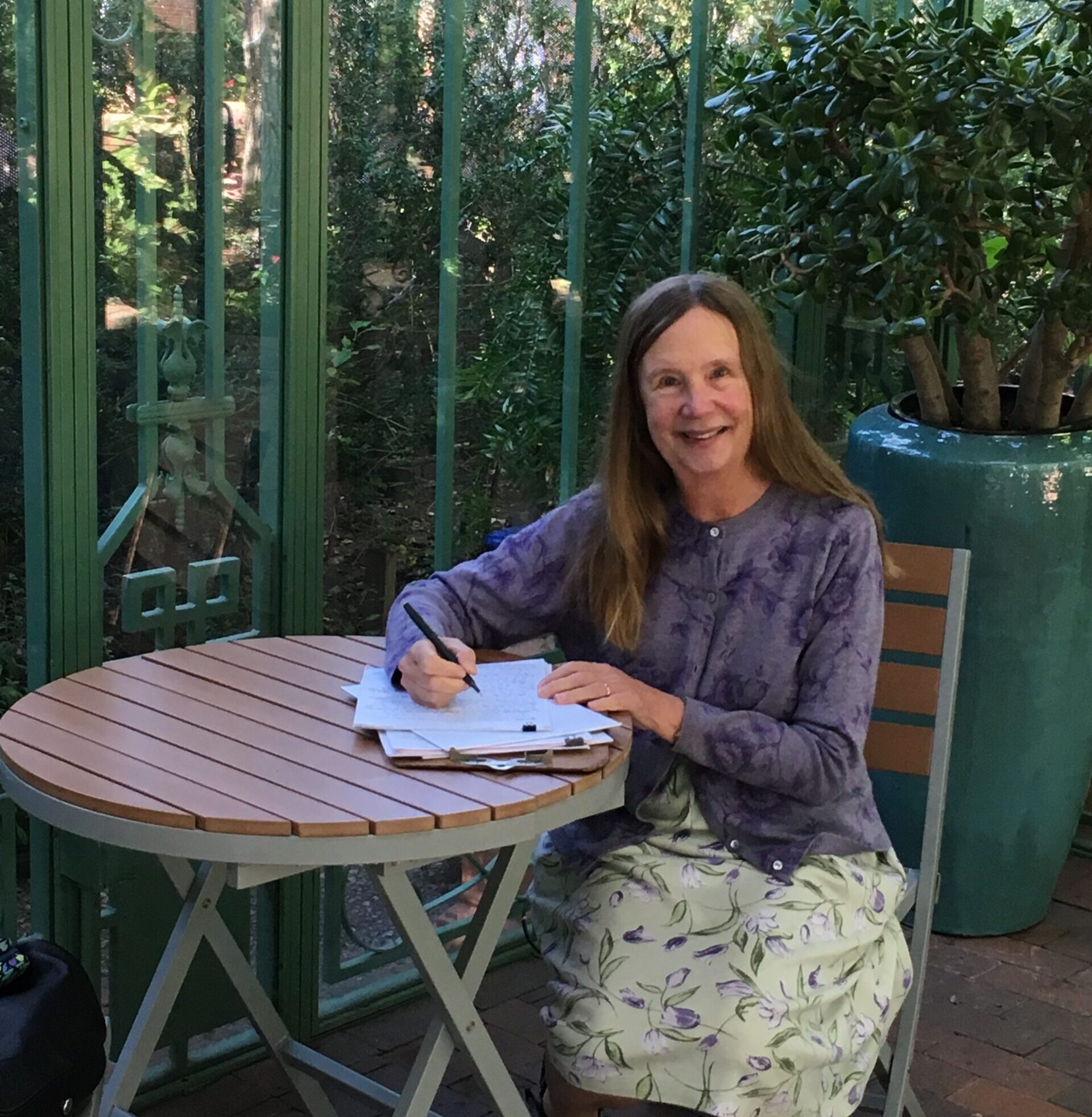 Today we continue our focus on chapter books by talking with Claudia Mills, author of more than 60 books for young readers, including dozens of chapter books.

What appeals to you about writing chapter books?

Oh, so many things! But if I were to distill them into one, it’s that I love the “between-ness and betwixt-ness” of them, for both author and audience. As an author, chapter books allow me to create a story that has much of the complexity and depth of a full-length middle-grade novel, and yet, because of their shorter length, make it easier for me to keep the entire story in my head at once, so that all the elements can work together as a satisfying whole.

For readers, chapter books give the first opportunity for truly independent reading of a more substantial text, once they have graduated past level-graded early-readers; it gives me the privilege of being part of their first solo voyages into the wondrous world of reading.

And as physical objects, chapter books are just so appealing! I love the size and shape of them, the way they feel in my hands when I hold one, and the additional allure of the many black-and-white illustrations that enrich the story in so many ways.

Finally, as a children’s author, I always felt that I had a ten-year-old voice in my head, and I remember a line I read somewhere from Natalie Babbitt that ten is “the last, best year of childhood.” But kids are growing up faster today than I did, so I think eight may be “the new ten.” The experiences I give my third-grade characters (and that my own sons enjoyed in third grade) are more like what I went through in fifth grade. So in writing chapter books I’m connecting with my own “last, best year” as a child.

What are the craft challenges of writing in this format?

Because of the shorter length of chapter books, structure is absolutely crucial, with tight construction in which nothing at all can be wasted. In the past, I tended to be drawn to writing books with lengthy interior monologues, sparkling dialogue presented in a fairly leisurely manner, and various (I fear) gratuitous detours along the way. But in a chapter book, something has to happen in every single chapter; every single scene has to earn its right to be there for the role it plays in advancing the overall plot.

Now, I suppose that this is true of all fiction – no readers want their time just to be wasted! But with shorter (and fewer) chapters, authors need to strive for a brisker, peppier pace that I personally found challenging – though also rewarding. This gave me a new economy in storytelling and discipline in plotting that benefitted me as well in writing my more recent middle-grade titles.

I wouldn’t say that for me characterization in chapter books is any less nuanced than in my middle-grade novels, though this may be in part because my own chapter books fall at the upper end of the length spectrum (around 15,000 words), so I have more space for character development than some authors do. With greater length comes greater opportunities to flesh out characters in more detail. In each book I try to give each character their own character arc, so that they, too, have grown and changed in the course of the story, from beginning to end.

That said, I can now recall books in which I did rely more on a single, broad-brushstroke characteristic for supporting characters. In my stand-alone title How Oliver Olson Changed the World, illustrated by Heather Maione (Farrar Straus Giroux, 2009)(which has actually been my most critically acclaimed chapter book), one of Oliver’s classmates is pretty much “the boy who likes rocks” and another is “the girl who likes bunnies.” There it was a joy to find amusing ways that their love of rocks and rabbits could figure into the story, but neither rock-lover nor bunny-lover is more than a walk-on player. But Oliver’s new friend, Crystal, who is the catalyst for his change and growth, is as fully developed as he is (I think!) and comes to her own crucial epiphany.

Most of my chapter books are in series, however (more on this below), and my approach of building a separate book around each of a group of friends allows me (in my view) to go deeper into characterization than if I had featured the same starring character over and over again.

I’m always aware that all of my characters, both primary and secondary, have enough yearnings, doubts, conflicts, disappointments, and triumphs to merit their own book. Perhaps oddly, I’ve also found that, as the series progresses, my understanding of each character is enriched by also having the chance to see him or her in a supporting role – and sometimes I end up liking them better, too, especially if they took their starring turn a bit too seriously!

If you write a series, what is your approach?

Although I have to admit that the most popular chapter book series tend to feature a single protagonist whose adventures readers avidly follow throughout the series, I’m irresistibly drawn toward writing series that present a group of classmates where, book after book, each one gets a turn to star.

I had a huge revelation the year I was in third grade (which also happens to be the age of most of my chapter book characters), which changed me forever as both person and author. At Crusader Choir in church, I sat next to a girl named Paula Jo Hatfield, who was from some other school, not mine; she and I shared a hymnbook. I had no acquaintance with her outside of the weekly choir practices and occasional Sunday morning performances, so to me Paula Jo Hatfield was just the girl who shared my hymnbook in Crusade Choir. But then one day – I still remember it so vividly – for no particular reason at all, the thought popped into my head with a startling force that to Paula Jo Hatfield, who was just the girl who shared her hymnbook; she had a whole entire life I knew nothing about, in which she was the star and I only a bit player. In my books, I want to share this insight with young readers: that supporting characters in somebody else’s lives are the stars of their own. This realization is a wonderful entrance point into empathy, of coming to see another person truly as a person in their own right. 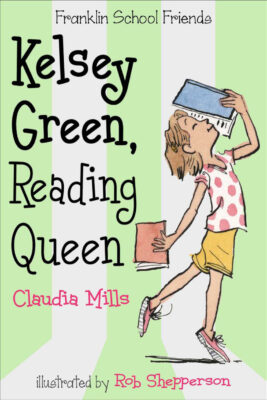 So in Kelsey Green, Reading Queen, illustrated by Rob Shepperson (Margaret Ferguson Books/FSG 2013) Kelsey’s best friends Annika and Izzy assist her in her quest to be the class reading champion – but then, with friendly support, Annika strives for a Sudoko prize in Annika Riz, Math Whiz, illustrated by Rob Shepperson (Margaret Ferguson Books/FSG 2015) and Izzy trains to win a 10K race in Izzy Barr, Running Star, illustrated by Rob Shepperson (Margaret Ferguson Books/FSG 2015). Once I had featured each of these three best friends in the first three titles of the Franklin School Friends series, I thought I was done, but then the two other recurring characters – Simon Ellis, who is good at absolutely everything and a formidable rival in the preceding books, and Cody Harmon, who is conspicuously not a classroom star, began to beckon to me.

Alas, at this point, the first three books were already published, so it was too late for me to give these two characters names that would rhyme with anything I could use in a title! But I’m grateful that I was nonetheless able to go on to share the story of Simon Ellis, Spelling Bee Champ, illustrated by Rob Shepperson (Margaret Ferguson Books/FSG 2016), who has to wrestle with awareness that his unbroken string of successes is putting a strain on his closest friendship, and Cody Harmon, King of Pets, illustrated by Rob Shepperson (Margaret Ferguson Books/FSG 2017), where Cody finally achieves recognition for nurturance of his menagerie of dogs, cats, chickens, rooster, and pig. 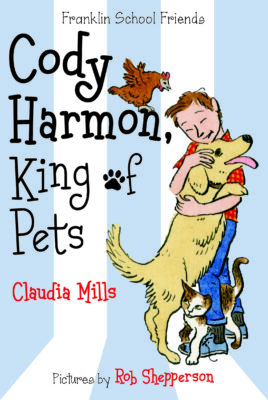 What’s next on the horizon for you?

I thought I could never love writing anything as much as I love writing chapter books, but last year I published my first verse novel, for middle-graders, titled The Lost Language (Margaret Ferguson Books, 2021), and I found the verse form utterly transformative.

I loved writing poetry as a child, and some of my sweetest moments as an author occurred when one of my characters loved poetry and I could have her “write” one of my own elementary school or middle school poems and thus achieve the glory of publication, decades later, for these early efforts! As an adult, for a number of years I attended an annual poetry-writing retreat where this childhood joy in poetry came rushing back to me. So when I started to write The Lost Language in verse, the poetic form allowed my best and truest voice to come pouring out onto the page. Now I’m working on a second verse novel, with a different set of characters and situations, but with that same heartfelt intimacy and immediacy of the narrative voice.

I’m also groping toward a middle-grade novel set in the late 1960s, the time of my own adolescence – such a turbulent and thrilling time to be thirteen. I have no new chapter book series in the works right now, but I would be very surprised if I left behind this dearly beloved form forever! 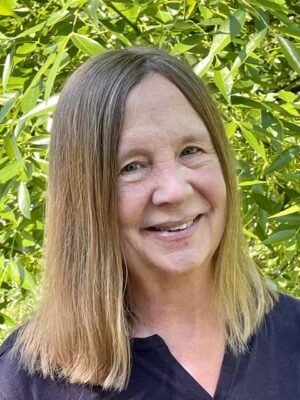 Claudia Mills is the author of over 60 books for young readers, including most recently the middle-grade verse novel The Lost Language and two chapter-book series: “Franklin School Friends” and “After-School Superstars.” Her books have been named Notable Books of the Year by the American Library Association and Best Books of the Year by the Bank Street College of Education; they have been translated into half a dozen languages and nominated for scores of state readers’ choice awards.

Claudia is also a professor emerita of philosophy at the University of Colorado and a faculty member in the graduate programs in children’s literature at Hollins University. She has written most of her books between 5 and 7 in the morning, lying on the couch while drinking Swiss Miss Hot Chocolate, but also loves expeditions to write in all kinds of places, from the Denver Botanic Gardens to cafes and museums of Paris. 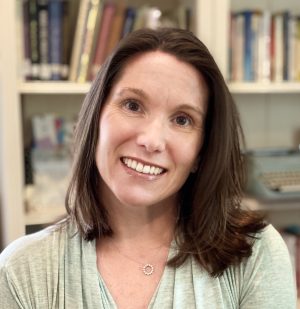