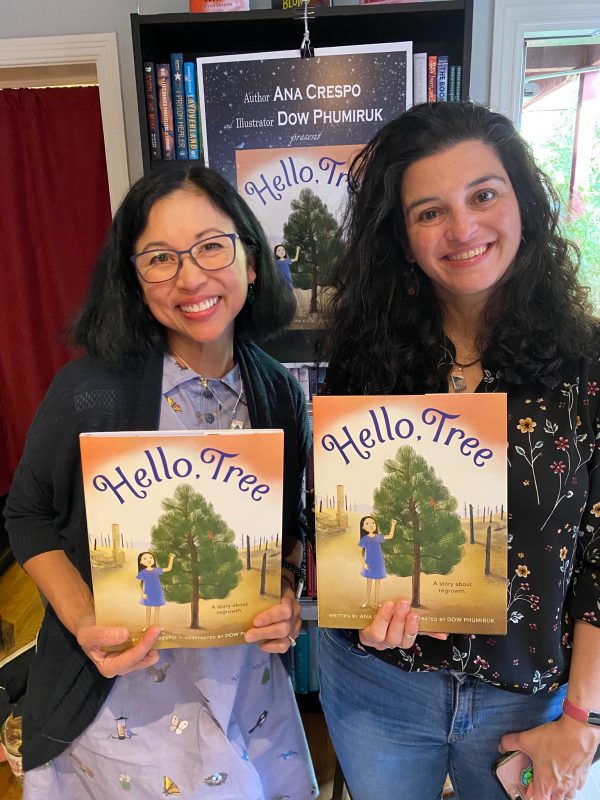 Ana Crespo is an assistant agent for the East West Literary Agency. She is also the author of many amazing picture books. I had the pleasure of meeting her at a library conference when we were both signing books for Albert Whitman. She’s both talented and passionate about creating books for kids. I was delighted when she agreed to be interviewed by Cynsations!

How has your background influenced the books you choose to write and represent as an agent?

I am a Latina immigrant, born and raised in Brazil. So, of course, Brazil influences the way I see the world and the stories I tell. In some of my books, such as The Sock Thief: A Soccer Story, illustrated by Nana Gonzales (Albert Whitman, 2015) and Lia & Luís: Who Has More? illustrated by Giovana Medeiros (Charlesbridge, 2020), that influence is obvious, as the stories include Portuguese words and are either set in Brazil or feature Brazilian-American kids.

But even though every story I tell is influenced by my childhood experiences in Brazil, not all stories I tell are about Brazil or its people and culture. Being Brazilian is just one very important part of who I am. I am also a mom, an immigrant, a nature-lover, a road-trip fanatic, the only person I know who can’t stand cherries, and more. All my life experiences influence what I write.

In terms of what influences the work I represent, it’s a little bit the same. Although I wasn’t a reader when I was a child, what I am attracted to in a story or artwork is influenced by the few books of my childhood, by Brazilian music, by the rhythm of my language, by the visual art I grew up with, and so much more. But it is also influenced by the things I experienced in this country and the books I fell in love with here.

Being Latina, I would love to connect with and represent more Latinx creators and the diversity within the Latinx community, as well as creators who are members of other underrepresented groups.

There’s rarely just one moment that leads to success. What turning points led to your becoming a writer and an agent?

I used to write stories when I was a kid, but I wasn’t a reader then. So, I think becoming a reader was a turning point in my life in general that eventually led me to want to write again, which, in turn, led me to pursue additional roles in the industry. I became a reader on the floor of a public library in Indiana, reading to my toddler daughter. I remember not finding any books with Brazilian characters then, and thinking that it would be fun to see Brazilian-American kids, like my daughter, represented in books. That was probably when the seed was planted, but I didn’t start pursuing writing as a career until ten years later.

A few years after The Sock Thief: A Soccer Story, illustrated by Nana Gonzalez, came out, I decided to pursue new roles in the publishing industry, eventually apprenticing under Deborah Warren at East West Literary Agency, enrolling in the Denver Publishing Institute, and finally becoming an agent.

Can you describe your style of agenting?

I am a very editorial agent and place great importance in providing thorough feedback both in writing and via brainstorming sessions, if needed. But I do ask my clients to have critique groups, too. I don’t think the development of a manuscript should be a process involving solely the agent and the client—critique groups are essential. Also, when it comes to communication, I try to be as transparent as possible about everything I do, from when to expect a manuscript to be critiqued to every detail of the submission.

What books can we look forward to by you and your clients?

The beautiful Hello, Tree, written by me, illustrated by Dow Phumiruk (Little Brown, 2021) was launched on Sept. 14. It’s about the connection between a girl and a tree, and the wildfire fire that threatens it.

There’s also another Lia & Luís book coming out next year—Lia & Luís: Puzzled (illustrated by Giovana Medeiros). In this book, Lia & Luís are sent a secret message in the form of a jigsaw puzzle, and they need to think mathematically to solve it. The Lia & Luís books are illustrated by Giovana Medeiros (Charlesbridge), and they are part of the incredible and extra-important Storytelling Math series, which highlights math, diversity, and the power of storytelling.

For my clients, there has been one announcement—Stacy S. Jensen’s picture book Before I Lived Here (illustrated by Victo Ngai) sold to Neal Porter (Neal Porter Books/Holiday House). The story is truly gorgeous, and I can’t wait to see what Victo Ngai (who illustrated Wishes) will come up with. Also the announcement of another sale for an illustrator client is coming soon.

Ana Crespo is happiest when she is surrounded by nature. In 2000, after studying journalism, she moved to the United States to pursue a Master of Education. But it was reading to her toddler that developed her love for books. She considers herself lucky for having a career that allows her to keep her imagination alive way beyond her childhood years. Originally from Brazil, Ana lives in the beautiful Rocky Mountain region with her husband and kids. She is both a picture book author and an assistant agent for the East West Literary Agency. Learn more about her as an author and more about her as an agent.

Linda Joy Singleton is a Roving Reporter for Cynsations. The author of over 55 books from picture books to YA/MG series, including Curious Cat Spy Club (Albert Whitman), The Seer (Llewellyn/Flux) and Dead Girl series (North Star Editions). She’s also written picture books, her most recent are Crane and Crane, illustrated by Richard Smythe (Amicus 2019). And coming March 2022, Sun and Son, illustrated by Richard Smythe (Amicus). She offers Creative Kidlit Consultations. Linda lives in Northern California foothills, surrounded by a menagerie of animals including dog, cats, peacocks, horses, and pigs. She reports on writing and publishing children’s literature for Cynsations.