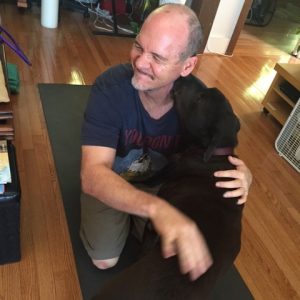 Bruce Hale joins us today to talk about the dog who inspired his newest book Switched (Scholastic Press, 2021), and what he’s doing to promote the book.

Switched is a tale that’s particularly close to my heart because it was inspired by my late dog, Riley. One morning when she was young, we went walking in a canyon and I let her go off-leash. Riley promptly headed into a thick stand of bushes and wouldn’t return, no matter how I called. The bushes were too thick for a human to penetrate, so I passed the time by wondering what she was getting into. Some unidentifiable blob? Raccoon poop? The rotting remains of some poor animal? If you’re a dog owner, you know the drill.

Of course, my imagination ran with it, and soon I thought, “Ooh, what if she found a puddle of dragon blood, which everyone knows has magical powers? If she drank it, would Riley be able to talk? Then what would she say?” By the end of the walk (yes, Riley finally reemerged), I was starting to brainstorm a boy-and-his-dog fantasy tale. Simple and fun, right? But it wasn’t as simple as I thought. 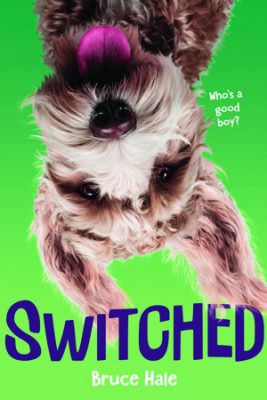 For a couple of months, I worked on plotting a high-fantasy tale, but as the weeks wore on, something just wasn’t working. The story wasn’t coming together and it wasn’t fun. One day, while reviewing my brainstorming notes, my eye caught on one particular plot point I’d come up with — that the boy and dog fall under a curse that causes their souls to switch bodies. Now that sounded like fun.

Jettisoning my fantasy plot, I started over from square one. First, I decided to set the story in our world. And second, I asked myself, “What kind of kid would most need to switch places with a dog?” In fairly short order, I decided that Boy and Dog would be opposites — the dog would be totally undisciplined, and the boy a bit of a neat freak.

After chatting with a college friend who became a family psychologist, I took his advice and gave my main character, Parker, an emotional wound that was driving his behavior. Parker had lost his beloved grandma and was avoiding his grief by trying to control his environment and cleaning obsessively.

Once those elements were in place, the story began to flow. Of course, it still had some rough patches by the time I was working on my second draft, but I ran the story by two dear author friends, Lee Wardlaw and Gaby Triana, and they provided invaluable ideas on how to improve it.

I can’t recommend beta readers highly enough — particularly when you’re writing something you haven’t tried before. Thanks to their help and plenty of hard work, the story improved, Scholastic bought it, and the book was on its way.

Having worked in the corporate world before becoming a full-time creative, I honestly don’t know how I survived it. The creative life suits me so much better. I love that I earn my living by writing, drawing, and telling stories. I love that I get to make my own schedule, whether that means burning the midnight oil to finish a project or going for a beach walk to refresh my brain. I love that I pursue projects I’m passionate about, and I love feeling that my work matters to kids, that our books serve a purpose by helping create the readers of tomorrow.

Go for it earlier. Don’t wait until you feel like you’re ready, just plunge in and start. I didn’t begin writing books until I was in my thirties, mostly because I felt like I had nothing to say. I was wrong.

We all have stories to tell, and the great thing about writing is that whether you’re a sixth-grader or a sixty-year-old, you can be a published writer. All it takes is the willingness to learn the craft and the grit to not give up.

What are you doing to get your books noticed?

One thing I’m doing differently with Switched is that I’m sending advance reading copies (ARCs) to ARC-sharing groups on Twitter. (Thanks to Jarrett Lerner for this tip!) The ARC-sharers are lovely people, many of them educators, who will read and promote your book on social media if they like it.

Of course, I’m still doing the usual Instagram/Facebook/Twitter posts and holding ARC giveaways, but I find that anything extra like this helps move that needle towards greater awareness. For example, I’m also sending review copies of Switched to dog magazines that might like to review it. It’s always worth asking, “Who would like to read this, and how do I reach them?” and investigating any special interest groups as a possible target for promotions.

“Author” sounds a little highfalutin, but “writer” sounds like someone who’ll roll up their sleeves and get to work. I was fortunate enough to work as a freelance writer for years before I first published a book, and it taught me to get over myself and get the work done.

No waiting around for The Muse to visit; just roll up your sleeves and set to work!

But I think debut authors need to balance more than just author and writer roles. Like the rest of us, they also have to include promoter in their job description. I didn’t understand that at first, and mostly relied on good luck and my publisher’s efforts to spread the word about my book.

Today, I know better. The more active you are in reaching out to promote your book, the better it’ll do. So if debut authors want to become full-time authors, they’ll keep working on that next book, and maybe even explore work-for-hire options to keep bread on the table.

At the same time, they’ll need to get the word out about their current book. One approach that works for me: As the publication date approaches, make sure to do at least one promotional activity every day (or two, if you can swing it) — even if it’s as small as a Facebook post or sending a review copy to someone. Consistent work, over time — whether writing or promoting — is what counts. 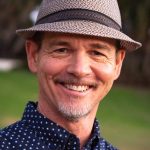 Raised by wolves just outside Los Angeles, Bruce Hale worked as a surveyor, actor, DJ, English teacher (in Japan), and corporate lackey, before turning to a career in writing. Bruce has written and illustrated more than 60 seriously funny books for young readers, including his award-winning series, The Chet Gecko Mysteries, The Monstertown Mysteries, and the Clark the Shark picture books. (One of which ended up in a McDonald’s Happy Meal. Not the way you’re thinking.) His book, The Malted Falcon, was nominated for an Edgar Award by the Mystery Writers of America, and Murder, My Tweet won a Little D Award for Humor Writing.  Bruce’s fractured fairytale, Snoring Beauty, landed on Oprah’s Recommended Reading for Kids list.

A Fulbright Scholar (in Storytelling), Bruce is in demand as a speaker, having presented at conferences, universities, and schools from New York to New Delhi.  His acting credits include numerous plays and musicals, several TV commercials, and an independent movie, “The Ride” (in which he plays a surfer’s agent).

Bruce is a member of the National Speakers Association, the Mystery Writers of America, and the Society for Children’s Book Writers & Illustrators.  A firm believer in fun, he can often be found hiking, kickboxing, or singing latin jazz with his band, Mezcal Martini.

A discussion guide with activities to Switched can be found here.