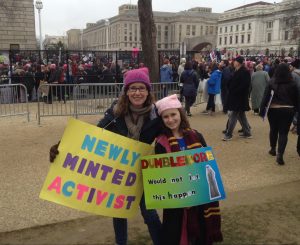 Image above: Author Amy Mucha with her daughter, declaring their rights.

Today we welcome two picture book authors who used Twitter pitch events to connect with agents and editors to get their debut books published. 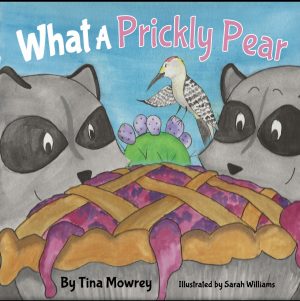 This book came together from a marriage of two living things that could be found in our yard: raccoons and a prickly pear cactus! We had two regular raccoon visitors for a few years. They would come after dusk and eat any leftover cat food that was in the backyard bowl. Our dogs would alert us to their presence and we would watch them eat until their bellies were full and they took off.

Soon, they had names; Roxy and Stumpy. At one point, they had three kits with them and we felt like proud parents! I had wanted to write a picture book with them as characters, but I didn’t have any clever ideas. Not until I started taking notice of the prickly pear cactus we had in our front yard.

We decided to try to harvest the prickly pears and make jam. Well, that didn’t happen, but an idea was born. Maybe a picture book about animals that eat parts of the prickly pear cactus. That research left me with other ideas, including one where several raccoons became interested in a prickly pear cactus because they were so hungry and saw other animals eating it. Of course, I knew which raccoons would be the stars of the book; Roxy and Stumpy!

In terms of publishing, how did you navigate the process of finding an agent and, with his or her representation, connect your manuscript to a publisher?

When I started considering the idea of querying agents with my picture book manuscripts, I did a tremendous amount of research. I read blog posts by authors, articles by agents and editors, and I read picture books. Lots of them!

I also connected with the writing community on Twitter and that is where I eventually connected with my agent, Stephanie Hansen, after two years or so I had participated in multiple twitter pitch events and she liked one of my pitches, which gave me the opportunity to query her and be “moved” to the top of her slush pile. Stephanie asked for some revisions and after I spent a few weeks on those, I submitted the manuscript to her again and she offered representation.

That was in 2018 and What A Prickly Pear found its home at Clear Fork Publishing a year and a half later. It’s a small Texas-based publishing company and I thought the topic of the book might fit well with the company’s other books. The illustrator, Sarah Williams, was chosen because she had lived in Texas at one point and it would be her debut as well as mine. So, there’s definitely a Texas theme going on with this book!

I would probably say I’m a teacher-author, actually. I love teaching and it informs my writing in so many ways. Learning how to effectively model the writing process for the students has definitely helped me with my craft as an author. I really have to examine each step so I can break it down for the students when sharing it with them.

Also, I am informed by their writing. Eighth graders can be so vulnerable in their writing and it’s such an honor to read their work. I think their willingness to be vulnerable has given me the courage to open up more as a writer and a human being.

And of course, it keeps me reading. Reading lots of young adult books and introducing the students to picture books. They love it when I read picture books out loud to them. I’ll never stop doing that!

As most authors suggest, read, read, and then, read some more! Read across all genres and levels.

Also, surround yourself with those who are involved in the writing process. Learn from the authors who are further along in the process and be an example to those who are just getting started.

Be willing to make mistakes and learn from them. There will be many and they are necessary for you to grow as an author. 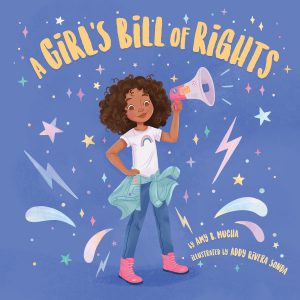 It took me over thirty years to go from dreamer and dabbler to committed beginner, then ten years more to go from beginner to my first offer. I made some pretty embarrassing mistakes when I was first starting out. The first “real” picture book I attempted was thousands of words long, and it preached. Worse, since I had written it with no sense of the market whatsoever, I had no idea how off-the-mark it truly was.

Thank goodness for fabulous teachers! As it turned out, I had the great, grand luck of living in the same town as Susie Wilde, children’s book critic and writing teacher extraordinaire. Susie has that marvelous talent for figuring out where a writer is and meeting them there, which was exactly what I needed. Rather than crush me with criticism, she encouraged me to keep at it, then showed me step by step how it’s done. Her classes and critique groups were just what I needed to learn the market and improve my craft.

I went from getting scathing critiques at conferences to getting positive ones, until finally last year I won a second place prize at SCBWI Carolinas. At around that time I also started seeing “nibbles” from agents, and before long I had my offer.

It seems to me that children’s book writers ought to be inspired by writing for children, so it is with a shade of embarrassment that I confess to writing A Girl’s Bill of Rights, [illustrated by Addy Rivera Sonda] entirely for myself. For many years I didn’t realize I’d written a picture book at all.

I was raised, as so many women are, to be a people pleaser. Keeping others comfortable always felt like my first and most pressing job. It never occurred to me to question or even notice this mindset until one day, just like that, I was done.

I knew I had to change, but how? Being a writer, I did what writers do: I wrote. I created my very own declaration of rights, a manifesto of sorts, giving my new beliefs the weight of a vow. It was tremendously satisfying, but more importantly, it helped.

I had no idea what I had written might inspire others, too, until I and tossed it into the ring via a #PitMad event on Twitter last year. To my surprise and delight, that was the pitch that received a “like” from the wonderful Naomi Krueger of Beaming Books, who then made an offer on the book a month later. I am thrilled with what it has become and hope that what so helped me can now do the same for others.

I had been querying agents and intentionally not submitting work to any publishers, so it was pretty surprising to end up with a publishing offer before an offer of representation. It all happened because of that Twitter #PitMad event, which I was doing mainly as a lark, never thinking it would actually turn into anything real. When I got the request from the publisher, I was pleasantly surprised but didn’t put too much stock in it. I sent my manuscript off, put it out of my mind, and focused on querying agents with my recently finished middle grade novel.

I was pretty surprised when Naomi Krueger emailed to tell me they were “very interested” in my manuscript. Hurrah!

By pure luck this happened just as I was receiving agent interest in my middle grade novel, too. In what turned out to be two truly charmed weeks, I received both the formal offer on A Girl’s Bill Of Rights and signed with the famously fabulous Ginger Knowlton of Curtis Brown, Ltd..

Without question, discovering the children’s writing community has been one of the most unexpectedly wonderful parts of my writing journey.

As a group, I’d characterize children’s book writers as empathetic, thoughtful, interesting, inclusive, and creative. It’s no surprise, then, that we make excellent friends.

I cannot imagine a better group of people than my local writing group, and I’ve so enjoyed getting to know the wider community as well, both in person at SCBWI conferences and virtually through social media. Most recently, I joined the picture book debut group 21 for the Books and am now getting to know and mutually support more than two dozen amazing picture book writers.

I cannot recommend enough to new writers that they find classes, conferences, and groups to join. Make yourself do it even if you are shy like me. They are worth it in spades!

Immerse yourself in your writing community! Join a critique group and go to conferences.

Share your favorite books on Bookstagram and join discussions in Facebook’s KIDLIT411 group.

And sign up for all the blogs you can: There are so many good ones and they’ll keep you updated on the latest books and industry news.

I would have done all of the above much sooner! 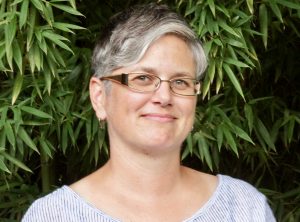 A transplant from Massachusetts, Tina Mowrey lives in Austin, Texas, where she was introduced to the prickly pear cactus! Having been a singer/songwriter for years, Tina decided to put pen to paper and try her hand at picture book writing. It was much harder than expected, but she loves it.

When she isn’t writing picture books, Tina spends her time working as an eighth grade language arts teacher and keeping up with her family of four humans and five pets! 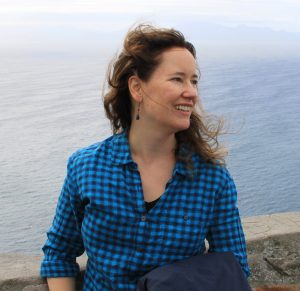 When she isn’t writing, she can be found reading, daydreaming, sipping tea, and eating chocolate medicinally. Amy is passionate about empowering girls and women everywhere to love themselves, embrace and support all the girls in their lives, and speak loud for what’s right.

Gayleen Rabakukk holds an MFA in Writing for Children and Young Adults from Vermont College and is an active volunteer in Austin SCBWI.