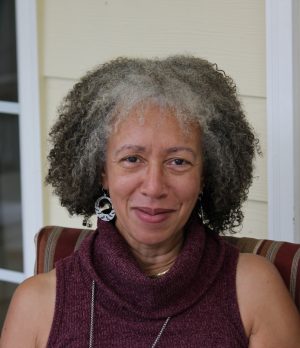 As I was working on the initial draft of my new picture book biography, The Highest Tribute: Thurgood Marshall’s Life, Leadership and Legacy illustrated by Laura Freeman (Quill Tree Books, 2021), I naturally gravitated toward reading biographies written by other children’s writers, for inspiration and to gather a sense of the many and varied styles that were possible.

I found myself returning over and over to books by Carole Boston Weatherford, the award-winning and bestselling author of over 50 books for young readers, many of which focus on celebrating the lives and accomplishments of Black Americans throughout history.

She joined me for a conversation about the work that we have in common.

Carole, I read a lot of your work in preparation for writing my first picture book, because when I think of picture book biographies that I love, your name always comes to mind first! Thank you for being such a wonderful role model for other writers through your body of work. As a reader, I find it inspiring to dive into these rich stories of people whose achievements have often been overlooked. What draws you to writing picture book biographies and Black history narratives?

When I was a child, I could go a month of Sundays without seeing myself in a book. Black stories and voices were either omitted, distorted or marginalized. Fortunately, the teachers at my all-Black elementary school covered Black historical figures like Harriet Tubman and introduced me to the poetry of Langston Hughes and Arna Bontemps. And my parents steeped me in family lore that included a century farm and two Reconstruction-era villages cofounded by my great-great-grandfathers.

Now, I mine the past for family stories, fading traditions and forgotten struggles. Like Harlem Renaissance bibliophile Arturo Schomburg to document the history of African descendants, I aim to construct a truer, more complete history. That is affirming for me and for our children. 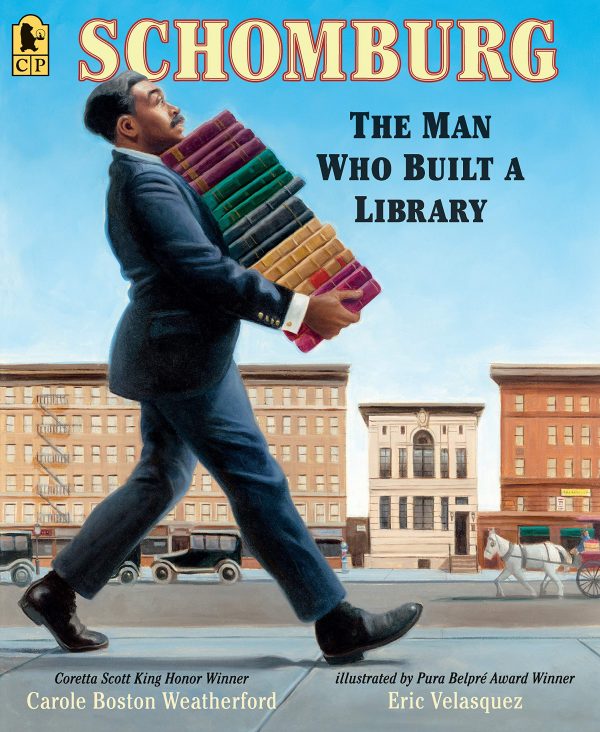 You’ve written about a wide variety of people as it is, and I would guess that you’ve encountered many more people and stories that would make excellent book subjects. How do you narrow down your ideas? What makes a particular person or story stand out to you as something you want to spend time with?

The subject must first resonate with me. I deeply admire the people I write about and the resistance and resilience that they exemplify. I challenge myself to approach subjects from a different vantage point and to tell both obscure and familiar stories in a unique way. Some subjects have intrigued me for many years before I write a single word. I write books about subjects I wish that I had met or at least learned about earlier.

Sometimes, I am driven by sentimentalism. For example, my late father was a fan of the singers spotlighted in my books of Becoming Billie Holiday illustrated by Floyd Cooper (WordSong, 2008) and R-E-S-P-E-C-T: Aretha Franklin, The Queen of Soul, illustrated by Frank Morrison (Atheneum Books for Young Readers, 2020). 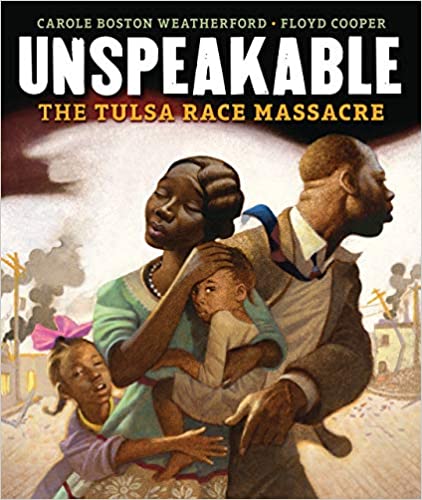 I’m so excited about your newest book, Unspeakable: The Tulsa Race Massacre illustrated by Floyd Cooper (Carolrhoda Books, 2021), which just released this week. This is one of those stories that people who are deeply familiar with Black history know really well, but that often gets excluded from the mainstream historical narrative that many schools teach and many textbooks adhere to. The narrowness of that mainstream historical narrative is of great concern to me, and I wonder if you share those concerns, and if it helps motivate your work.

We often talk about books like yours as “untold” stories, but of course, that simply means stories that have not been told in certain places at certain times, because these stories have always been shared in Black communities. I often feel that as writers for children, we have a certain power to break down those walls, and to tell these “untold” stories to a broader audience. Do you feel a similar drive to adjust or add to the historical record? What is the role of storytellers like us in shaping the history that the next generation will understand as foundational?

Some of these untold stories are not only new to white folks but to Black people as well because the stories are not taught in schools. For example, after publication of Voice of Freedom: Fannie Lou Hamer, Spirit of the Civil Rights Movement, illustrated by Ekua Holmes (Candlewick, 2018), I was surprised that many adults—Black and white—had never heard of the voting rights activist.

Freedom on the Menu: The Greensboro Sit-ins, also illustrated by Ekua Holmes (Candlewick, 2016), was met with a similar lack of awareness outside of North Carolina. Some historic narratives are familiar only in certain regions. I bring stories of seminal events and key figures to broader audiences. More important, my books teach teachers and equip them to pass the stories on.

Unspeakable was in the works before the television shows “Watchmen” and “Lovecraft Country” ushered the Tulsa Race Massacre into popular culture. Unspeakable will spark conversations across generations about the historic continuum of hate violence.

It must have been a challenge to tell this difficult and painful story about Tulsa in a style that works for young readers, and you do an amazing job of making the information relatable. How did you approach that challenge, and why did you feel it was important to share this story with even the very youngest children?

I told this story for the same reason that I wrote the elegy Birmingham, 1963 (WordSong, 2007) about the bombing of Sixteenth Street Baptist Church. Past sacrifices should not be forgotten. But they will be unless we pass our history down to our children.

I do not believe that children are too tender for tough topics. Children deserve and demand the truth—a complete history that had not been whitewashed or candy-coated. Children were victimized by slavery and segregation and suffer under systemic racism. Given the adultification of Black children and the criminalization and police and vigilante murders of Black people, we cannot afford to condescend to children.

One thing that always strikes me about Tulsa history is the narrative of Black success—financial success, business success, community success—interwoven with the narrative of violence and tragedy. Such is our history, to be sure, but so often it seems that when our stories do get told, the narrative of triumph gets overshadowed by the narratives of violence, loss, and the repeated, systemic attempts to keep us down.

It felt like you made a particular effort to emphasize the power and prosperity of the Greenwood community prior to the massacre, to underscore what was damaged and what was lost. Did you think about that juxtaposition deliberately in crafting the book? 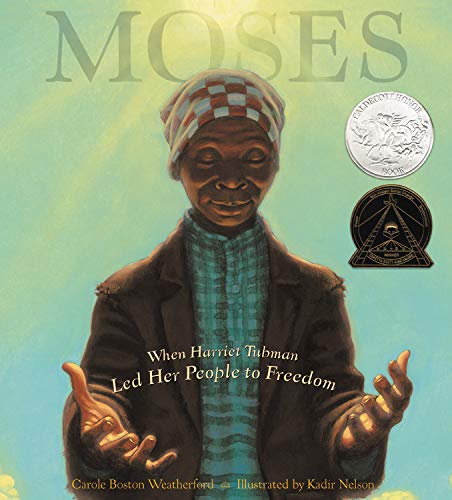 Just as my book Moses: When Harriet Tubman Led Her People to Freedom, illustrated by Kadir Nelson (Hyperion Books for Children, 2006), echoes the Book of Exodus, Unspeakable is akin to the Book of Lamentations.

Although I took inspiration from the Bible, I took a forensic approach to the Tulsa Race Massacre as if I were prosecuting a crime, which it indeed was. Shedding light on that vanished history amounted to reconstructing that crime scene.

I researched the Tulsa Race Massacre briefly for a sidebar in an upcoming nonfiction book, and I discovered that there are some fascinating local resources in Tulsa documenting the incident. What was your research process like, and did you have any favorite sources or make any intriguing discoveries in the course of learning about these events?

I consulted the report of the Oklahoma Commission to Study the Tulsa Race Riot of 1921, and the collections of the Oklahoma and Tulsa historical societies and the Greenwood Cultural Association.

I knew about the massacre before embarking on this project. Yet, as I read about the event, I was stunned by the sheer numbers. The Greenwood community boasted two newspapers, two movie theaters, over 20 churches, dozens of restaurants and grocery stores, 15 Black doctors, six privately-owned planes, several libraries and the largest Black-owned hotel in the entire nation. Sadly, the massacre left 150 to 300 dead and 8,000 homeless.

The story is indeed heartbreaking. The pain of it shines through Floyd Cooper’s illustrations in Unspeakable, which are striking and powerful. Do you have any favorite aspects of the illustrations, or of the process of seeing the book come to life? How does it feel to see your words set to images?

Floyd’s illustrations are absolutely masterful—cinematic and searing. While drafting the manuscript, I asked Floyd, a Tulsa native, to collaborate because I knew he would be passionate about the subject. What I did not know then is that Floyd’s grandfather had shared with him a firsthand account of the massacre.

For me, Unspeakable is a testament to those who made Black Wall Street a beacon of hope and pride and to those who lived through, or perished in, the massacre. That same sentiment is reflected in every one of Floyd’s illustrations. My favorite is the cover image, showing a family clutching each other as they flee Greenwood which is aflame. The gaze of the youngest child, who is in her mother’s arms, is at the very center of that image. Genius!

Indeed. Thank you, Carole, for joining me for this conversation. Your work is always a great inspiration! 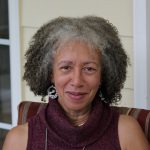 The New York Times best-selling author Carole Boston Weatherford recently released Beauty Mark: A Verse Novel of Marilyn Monroe (Candlewick, 2020) and R-E-S-P-E-C-T: Aretha Franklin, the Queen of Soul. Her 50-plus books include the Caldecott Honor winners Freedom in Congo Square, illustrated by R. Gregory Christie (Little Bee Books, 2016), Voice of Freedom: Fannie Lou Hamer: Spirit of the Civil Rights Movement, and Moses: When Harriet Tubman Led Her People to Freedom. She won a Coretta Scott King Author Honor for Becoming Billie Holiday, NAACP Image Awards for Moses and for Gordon Parks: How the Photographer Captured Black and White America, illustrated by Jamey Christoph (Albert Whitman Books, 2015), the Arnold Adoff Poetry Award for The Legendary Miss Lena Horne, illustrated by Elizabeth Zunon (Atheneum Books for Young Readers, 2017), and an SCBWI Golden Kite and WNDB Walter Award for Schomburg: The Man Who Built a Library, illustrated by Eric Velasquez (Candlewick, 2017). Among her most popular titles are Freedom on the Menu: The Greensboro Sit-ins, illustrated by Jerome Lagarrigue (Puffin, 2007) and The Roots of Rap: 16 Bars on the 4 Pillars of Hip Hop illustrated by Frank Morrison (Little Bee Books, 2019). Baltimore-born, Weatherford teaches at Fayetteville State University in North Carolina. 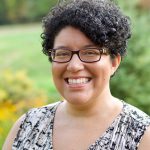 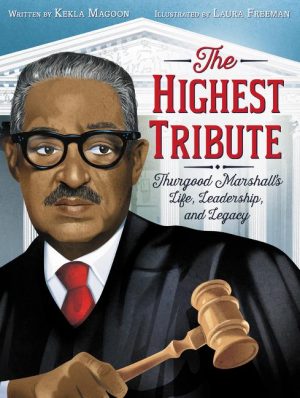 She also writes nonfiction on historical topics, including The Highest Tribute: Thurgood Marshall’s Life, Leadership and Legacy and She Persisted: Ruby Bridges illustrated by Alexandra Boiger and Gillian Flint (Philomel, 2021), as well as the forthcoming Revolution in Our Time: The Black Panther Party’s Promise to the People from Candlewick.