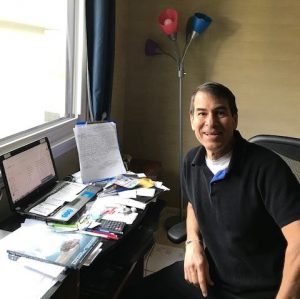 Alex Sanchez is a successful tween-YA author with a long, distinguished career.

Most bumps I encountered in my writing journey (not to mention the rest of my life) stemmed from being scared. When I started to write fiction, I was scared nobody would want to read what I wrote. And if they were to read it, I was scared they would shame, ridicule, and reject me. 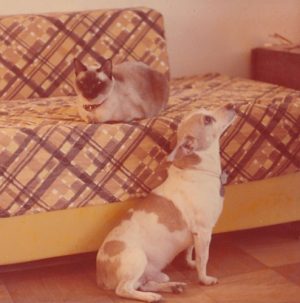 My fears were so strong that they undermined my voice. Rather than write honestly what I wanted to say, I tried to write what I thought people wanted to read…and I failed. I couldn’t do it.

But when I tried to write something more personal and honest, I couldn’t do that, either.

My fear and shame of revealing to people who I really was so overwhelmed me that I would abandon each manuscript for a “better” idea. I accumulated boxes and boxes of unfinished stories.

Finally, I realized I needed help; my fears were too strong to overcome on my own. I reached out to two creative friends—a songwriter and a papier mâché artist—who were struggling with their own creativity.

My friends gave me the courage I lacked. For the first time I was able to write honestly. And I began to understand that writing fiction is about emotional honesty. We write and read stories in order to feel and connect with other people through emotions. But it takes courage to pick up a pen, be vulnerable, and expose on the page our innermost feelings. Even if no one else reads what we write, the words stare back like a mirror, showing us who we truly are.

With my friends’ encouragement, I became able to write about my fears, my wounds, my secrets—the tender points by which we connect with others. In my case, much of my hurt, fear, shame, and guilt revolved around growing up gay and bisexual in a homophobic culture. My childhood and teen wounds had never healed. Writing was a way to heal them, but first I needed to be willing to endure the sting of opening up the wounds.

It took five years and literally dozens of drafts to write, revise, and rewrite my first novel. Not only was I learning to open up, I also had to learn how to write a novel. At the end of that time, my writing instructor, Barbara Esstman, recommended me to her agent, Miriam Altshuler. And with my friends’ encouragement, I overcame my fear of sending her the manuscript.

The wait for a response was nerve-wracking. When Miriam’s assistant finally responded by saying they liked the manuscript but suggested some changes, I was furious. If they didn’t like my story as it was, tough luck.

I was scared of failure and scared of success. Getting that far had raised the stakes. My friends calmed me down and gave me the courage to revise the manuscript. Miriam loved the revisions and began shopping the manuscript to publishers. 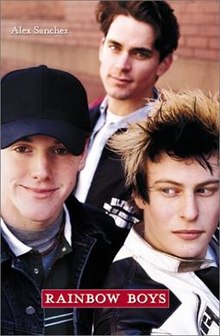 My fear that nobody would ever want to read, much less publish, what I’d written began proving true.

In 1998, publisher after publisher feared the risk of publishing a story about a love triangle between three gay and bisexual high school boys. But after a year, Simon & Schuster made an offer.

My editor, Kevin Lewis, guided me through further revising the manuscript. Again I was scared I was screwing it up. And again my friends gave me courage to go on.

My first novel, Rainbow Boys (Simon & Schuster), was published in 2001 the week of the 9/11 attacks. Both events terrified me—almost equally. But while our country began recovering from the attacks, I started to receive responses to my book.

What I experienced was healing, both for me and for others.

The success of Rainbow Boys led to a sequel, and then more books. With each manuscript came new fears. Would I be able to complete another book? Would it be “as good” as my previous work? Would people like it as much?

My agent and friends helped me to carry on and keep writing.

There were also manuscripts I spent years on and ultimately didn’t sell. With each of those, I feared I was a has-been. Again, my agent and friends helped me to keep going. I now have a new book to be published this June, and the coronavirus has brought new fears. Will bookstores survive? Will people still have money to buy books?

I’m grudgingly accepting that I’ll always have fears—some old, some new. Rather than fight the fears, I try to accept them as part of my humanity, part of the way I connect with others. They remind me of my vulnerability.

My task as a writer is to be honest about those vulnerabilities and in so doing, let others know they’re not alone.

Everything worked out the only way it could, given my limitations and the vagaries of fate. Hopefully, I learned and grew from my mistakes. And overall, it’s been a wonderful ride—and it continues to be. I’ve been very fortunate, and I’m grateful.

The big stand-out change I’ve seen is all the LGBT+ characters that now appear in children’s-YA lit. It’s wonderful to see that sea change and gratifying to know I’ve been part of the wave.

Tell us about your latest and/or upcoming books! How did they come to be? What were the joys and challenges of bringing them to life? 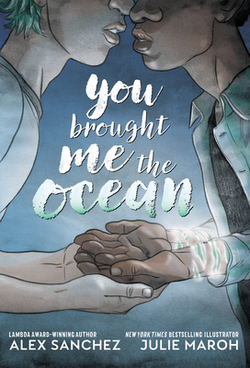 Two years ago, DC Comics invited me to make a pitch for a graphic novel based on their character Aqualad.

Immediately my fears reared up. I knew nothing about how to write a graphic novel. But the DC team, my agent, friends, and my local librarian encouraged me through the process.

The collaboration with artist Julie Maroh (Blue is the Warmest Color) and my editor, Sara Miller, was one of my biggest writing joys ever. It felt so amazing to watch characters I’d written come to life through such expressive illustrations.

The result, You Brought Me the Ocean, comes out this June.

Find people who will give you courage.

Write for the joy of writing.

Write what you’re most scared to write.

Write the story that only you can write.

And keep writing, no matter what.

His full-length graphic novel for DC Comics titled You Brought Me the Ocean comes out in June.

An immigrant from Mexico, Alex received his master’s in guidance and counseling and worked for many years as a youth and family counselor. Now when not writing, he tours the country talking with teens, librarians, and educators about books, diversity, and acceptance. He lives in Penfield, New York.