How did the idea of adapting Dunbar-Ortiz’s work for a young readers’ book come about?

Dr. Reese: In 2014 when Dr. Roxanne Dunbar-Ortiz was doing a book tour for An Indigenous Peoples’ History of the United States, teachers in the audience asked her if an edition of the book would be available for younger readers. She talked with her editor at Beacon, they secured funding for an adaptation, and asked me if I would do it.

I’d worked with Jean Mendoza on articles, presentations, and on American Indians in Children’s Literature, and told Beacon I’d do it if Jean could do it with me. They said yes, and we got to work.

Dr. Mendoza: As parents of Native kids, we knew there was a need for that kind of book. There was literally nothing like it out there.

What challenges did you face while writing this book?

Dr. Reese: It was challenging, in many ways, to turn a book written for adult readers into one that teens could read on their own. Dr. Dunbar-Ortiz could assume that her readers had the background knowledge necessary to move through the book (or that they could do research if needed), but we felt it necessary to include basic information about specific tribal nations and concepts that we thought young people might not be familiar with.

The harder task was adapting the contents so that the integrity of the information was intact but that the brute force of the words was tempered for younger readers. To do that, we spent many hours reading sources Dr. Dunbar-Ortiz used. Our goal was to retain the information but work with the sources to quote material that would not, in essence, negatively impact the well-being of Native children who we knew would also be reading the book. We kept Native readers—our own children, in fact—in mind as we worked.

It was emotionally challenging to spend so many hours with the violent histories of so many Native people in so many Native nations. Of course, Native peoples persevered, and we wanted that perseverance to be part of the book, too. For my part, that meant thinking about how I could insert mirrors for Pueblo children. We settled on two: a photograph of a seed pot made by Pearl Talachy, a potter from Nambé and a photograph of the statue of Po’Pay⁠—he led the Pueblo Revolt of 1680–carved by Cliff Fragua of Jemez Pueblo. It stands in Washington, D.C. in the U.S. Capitol Visitors Center.

Dr. Mendoza: One of the challenges was logistical. How were we going to get this job done? We started out meeting in a coffee shop, with one of us taking notes on a laptop while the other talked, but that didn’t work out so well. Ultimately, we worked in Google Docs, using a turn-taking system that worked relatively well for the entire project. And it gave us a record of everything we had discussed, every paragraph we had completed.

I’m sure people collaborated on major projects like this back in the days of typewriters and telephones, but it’s hard to imagine how that worked. Laptops and Wi-Fi made it possible for us to do things like approve and critique maps the designer had created while Debbie was home and my husband and I were snowed in, in a motel in Missouri.

Because schools haven’t taught the truth about Native history, many U.S. students believe that we no longer exist. Yet we are still here, over 500 sovereign nations strong, and thriving as part of the contemporary United States. Your book should be required reading in school. How are teachers and students reacting to it?

Dr. Reese: A Native friend told me that she gave a copy of it to Native kids in her community. One takes it with her to school, every day, in her backpack. It empowers her, which is what we hoped it would do. In 2019, Jean and I gave a talk to juniors at a local high school. Their teachers used it with them and told us how impactful it was for the students as they did reports on various chapters.

We included facts that most books do not include, like the largest mass execution in the US—the hanging of the Dakota 38. The teachers said that was particularly difficult for some students to learn about because until then, they had placed Abraham Lincoln on a pedestal. [Cynsations Note: For more information, see The Traumatic True History and Name List of the Dakota 38 by Vincent Schilling from Indian Country Today.]

Dr. Mendoza: A few weeks ago, I talked about IPH4YP with a room full of non-Native and Native people, mainly educators, who are working to get a Native Studies curriculum in their district.

Participants in the session included upper-level administration and they all seemed enthusiastic about what the group is doing. So it was humbling and heartening to have IPH4YP seen as part of such a robust effort to do better, to do right.

My son-in-law, who’s a high school U.S. history teacher, is teaching with IPH4YP. He said some of his students even had kind of a paradigm shift just around the book’s index. The names of Native people all have their affiliated nation in parentheses after—like, “Tecumseh (Shawnee)”—and the names of non-Native people are followed with something like “(Euro-American, U.S.).”

The students weren’t used to seeing that kind of identifier after a white person’s name—it’s the white default that implies that being white is the normal thing, and only the not-white people get labels. I’m looking forward to hearing what else he has to say about his students’ interactions with the book.

One thing we’ve noticed that really pleases teachers is the curriculum guide for the book, which was developed by Dr. Natalie Martinez. She also created special lesson plans for Indigenous Peoples’ Day (Good-bye Columbus Day, in a growing number of places.), Thanksgiving, and the 400-year commemoration of the Mayflower landing. We’ve been so pleased with what she has done. It will really help teachers.

What do you hope readers will take away from this book?

Dr. Reese: The importance of resistance to injustice. As we worked on the adaptation, we read about the Water Protectors who were fighting pipelines, particularly the Dakota Access Pipeline. So much of what we saw in the book chapters was happening in real time, and we felt it important to make the point that we’re still here and still exercising our sovereignty.

Dr. Mendoza: In line with what Debbie said—one thing I hope non-Native readers will take away is awareness of the persistence of settler-colonialism. We still see the Doctrine of Discovery, from the late 1400s, (mis)informing laws and policies. We still see sovereignty being disrespected, still have white “leaders” who want to do away with Native nationhood and take the land for pipelines and border walls. We still have people in power who want to squelch Native voices.

So I want readers to be aware, be vigilant—not so they can feel depressed and discouraged, but so they can see how badly their work is needed, and what a strong positive effect they can have. Non-Native people especially can work in their own communities to dismantle what settler-colonialism built.

What are you currently working on? Are you working on any upcoming projects together?

Dr. Reese: Not any book projects. We’re doing some traveling together to promote the book, and we continue our work at American Indians in Children’s Literature. We had hoped to do more nonfiction after we finished with An Indigenous Peoples’ History but that isn’t working out, and I’m sorry to Jean that I’m not able to continue with those ideas.

We spent nearly three years in very violent, brutal places, reading the writings of people that are put on pedestals in most history texts. At the time, I often had to step away for a day or two. I didn’t realize the cumulative impact it was having on my emotional well-being. Once it was turned in, I was so relieved. I could get back to the work that I’ve done for 30 years (analyzing children’s books with Native content). It, too, is taxing but the work I do on any given book analysis is finite. It ends and is interspersed with joyful reading and the joys of life.

Dr. Mendoza: Those additional nonfiction writing projects are a great idea for somebody, or several somebodies, and I hope those will come about one day soon, but it won’t be us doing them, as Debbie said. And that’s okay. It will be awesome if some of the events described in IPH4YP can inspire young Native writers and artists to do in-depth research and create books about Indigenous resistance, for young people.

Definitely, the history we were reading and writing about is very, very painful stuff. “Traumatic” is the way Nikkita Oliver and Roxanne Dunbar-Ortiz described it in a public conversation they had about IPH4YP in Seattle.

And as Debbie mentioned in one of her responses earlier, the parallel between present time, and the events and ideas we were including in the book wasn’t subtle. Hearing some of the same old words, the same racist policies being pushed, and to know that it comes from the same place, the same apparently bottomless cesspool.

After All. This. Time.

I was just thinking today about some of the first conversations Debbie and I had about Native content in books for kids (specifically, our kids)—more than 20 years ago. At that time we could pretty much count the Native writers and illustrators on one hand (Slight exaggeration? Maybe not.). 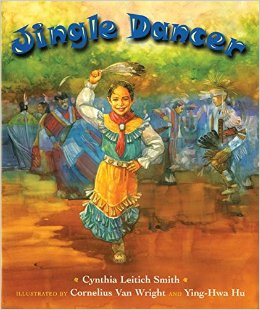 The numbers are greater now, and Native people are creating some fine work and getting published. That’s reason to celebrate, and I’m confident there’s more to come.

Meanwhile, I also have a pile of books to read and review yet for AICL. Though it’s much slower for me than for Debbie, I’m so glad to have the opportunity to do that critical analysis.

And thanks, Kim, for your questions!

Debbie Reese is an educator and founder of American Indians in Children’s Literature (AICL).

She is tribally enrolled at Nambé Owingeh, a federally recognized tribe, and grew up on Nambé’s reservation.

She holds a PhD in Curriculum and Instruction from the University of Illinois at Urbana-Champaign.

Jean Mendoza is a curriculum specialist and educator, focusing on representation of Indigenous peoples in children’s and young adult literature.

She is white, and the mother of Native children. She holds a PhD in Curriculum and Instruction and an M.Ed in early childhood education from the University of Illinois at Urbana-Champaign.

She is a co-editor of American Indians in Children’s Literature.