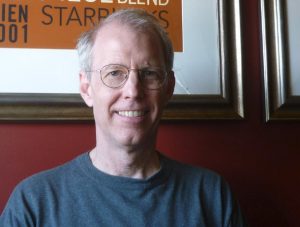 How to place things to ‘look right’ in your story illustrations…

Illustrators, let’s talk about a fundamental issue of draftsmanship that you’ve probably run up against in your pictures.

It falls under “linear perspective.”

The issue is eye level (or you might have heard it called “horizon line.”) Viewers are typically unaware of it. Not all illustrators get it. And some illustrators who use the idea are unconscious of doing so.

If you thought, where the sky meets the land in your scene, you’re partially right. But what if your scene is indoors? The horizon line is just as crucial.

So imagine the horizon line–instead of the line where land meets the sky–as the line between the dots of your own two eyes.

You’re setting your point of view, where you imagine yourself as you surmise the view you’re creating on paper, where you fancy your own eyes to be while you’re standing, sitting or lying, watching your story scene.

This becomes the point of view for everyone who looks at your picture.

So draw a line across the blank picture space picture at about the level where it should be. It’s often the first line to make in a sketch.

Artists struggled through history to evoke 3-D space on 2-D surfaces. They did it for the novelty of the effect (the way it made figures jump out a bit from the background.) Also to ‘read’ more clearly and fit the action into the picture space better.

In ancient times they played with bas relief, carvings and molded forms on the surfaces of walls, monuments, coins. For paintings, they tried all kinds of tricks to convey depth and get things into right relationship with each other and the picture space. Atmospheric perspective (outlines fuzz out in the distance), coloration (things get bluer the farther away they are), overlapping and foreshortening (shapes appear larger as they get closer and smaller as they recede from us.) They worked okay.

But there remained this problem of lines. The perplexing ways they moved when viewed from different distances and angles. Especially evident with architectural subjects. Lines happen wherever planes join up and there’s a lot of that going on in building construction.

Lines and their angles confounded artists until Filippo Brunelleschi, a Florence, Italy based architect/builder/engineer tackled the mystery.

He got on it, the story goes, after a particularly frustrating day trying to sketch Roman ruins with his art pal, Donatello, the sculptor. Try as hard as they might, they couldn’t get the crumbling structures to look right. Those darn angle lines!

Finally, with the help of some mirrors and a glass pane, he devised a way to recreate, precisely, in any sketch, the geometry of foreshortening we see in nature.

His method, which came to be called linear perspective, encapsulates the world into a grid of cubes, a bit like the game of Minecraft does on a smartphone today. It cubifies while bringing everything to the viewer’s point of view–the 15th century’s version of Augmented Reality.

And it all hinged on the device, figured out by Brunelleschi, of the eye-level line. (Let’s not even use the term horizon line anymore, because it can mislead.)

Eye-level is the active ingredient of linear perspective. Think of it as less as a line, more as a hula hoop hung around your head, right in front of your eyes. No matter which way you turn, a disc reaches out from your eyes to ‘infinity’ (or the horizon) and slices the world out there into a top half and a bottom half.

Vanishing points (you’ve heard of those!) rest on the rim of the hula hoop.

With these clever little tools of linear perspective – especially the eye-level line, which is really a 360-degree hula hoop hung around the artist at eye-level, and vanishing points (every object has them, spaced 90 degrees apart on the hoop like the four compass directions)–our complex picture sorts itself out. The lines and angles do themselves. The artist doesn’t have to sweat the measurements and proportions. They don’t have to bluff or guess anymore.

Everything above the eye level line in our picture, we look up to and everything below the line we look down upon. And we draw these accordingly (which, yes, takes skill. But observation, good visual reference, and practice help that.)

Now everything in our scene is placed just so, in natural proportions that feel right to the viewer.

Now the child reader trusts the artist and the picture. They feel part of the depicted moment.

The suspension of disbelief so necessary to keep her in the story has not been disrupted.

Perspective took the art world by storm in the Renaissance because it immersed viewers in the reality of a scene. Creating the point of view is the sole power–and responsibility–of the artist. It’s vital communication with the viewer.

When we firmly decide where to place the eye-level, it’s as if we’ve activated the CAD program. We’ve turned on the app for way-finding in our illustration. Not out of geeky coolness, but as a kindness to the child viewer attempting to absorb the story being presented.

Get a stack of your favorite picture books and look at the pictures. Find out if you can spot where the artist positioned their eye-level in those images.

Not all illustrations have one. But most do. You’ll start to see the converging lines and other hints. The exercise is a good way to internalize eye-level and its profundity in composition. 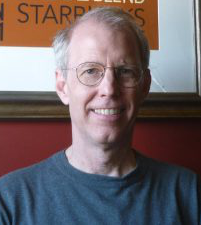 He’ll start the Spring 2020 semester of his online class on children’s book illustration at the end of the month.

Sign up here (click “save my spot”) to join his free webinar Express Your Children’s Book Illustrations in the Language of Art on March 26.