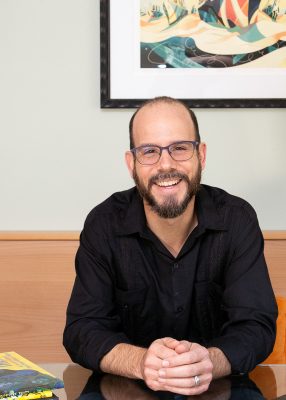 Sometimes a book can take you back to a particular time or place. When I read All of a Sudden and Forever: Help and Healing after the Oklahoma City Bombing by Chris Barton, illustrated by Nicole Xu (Carolrhoda, February 2020), I remembered a day that book would’ve made a big difference.

In February 2001, when President Bush dedicated the Oklahoma City Memorial Museum, I accompanied my daughter’s third grade class to see the ceremony. Both parents and teachers had a difficult time explaining why we were there beyond “seeing our president.” His dedication speech prompted even more questions about what happened and why. As a former journalist, the facts of April 19, 1995, were etched in my mind, but they weren’t things you shared with eight year olds.

If I took that field trip today, I would start by reading All of a Sudden and Forever with the students. It would’ve made our day easier, but this book also has a reach far beyond the Oklahoma tragedy.  I’m honored to share Chris’s insights on creating it with Cynsations readers.

One of the things I love most about All of a Sudden and Forever is how you shaped the account of this particular tragedy into a more universal story of hope and healing. From a craft standpoint, I’m wondering when this theme emerged and how it shaped your writing process?

About 15 months passed between my initial, spur-of-the-moment visit to the Oklahoma City National Memorial and Museum — I was in town in April 2016 to promote Mighty Truck, illustrated by Troy Cummings (HarperCollins, 2016) and had a few free hours at the end of my trip — and Lerner Publishing’s acceptance of my proposal for a nonfiction book about the Oklahoma City bombing.

By that time, I had done a ton of database research — sifting through newspaper and magazine articles and television transcripts from the previous 22 years and looking for individuals’ stories that I might want to focus on. And after getting steeped in the stories of victims, their families, survivors, and first responders, I had returned to the Memorial and Museum for a fresh look, and to interview staff and spend some time in the archives.

Here’s how that book proposal began (complete with working title):

OKLAHOMA CITY would be a picture book about the response to and recovery from the 1995 bombing of the Alfred P. Murrah Federal Building, timed to coincide with the twenty-fifth anniversary of the attack and centered on the famed Survivor Tree that withstood the blast and still stands right between the Memorial and the Museum.

So, part of the book’s theme was already there by that point. That sentence does describe the book that resulted, but it’s missing the heart of what we ended up with in All of a Sudden and Forever, which is as much about difficult emotions and complex relationships borne from tragedy as it is about that one American elm tree.

That heart — that other part of the theme — came from my phone interviews in summer 2017 with several people whose lives were changed by the Oklahoma City bombing.

I had not yet approached everyone on my list of potential interviewees when, in mid-August, I began having trouble sleeping. I couldn’t figure out why. Did I feel well physically? Yes. Was I worried about anything? Not especially. Were my kids all doing OK? Pretty much.

Somehow, I realized that my brain had all the raw material that it needed, and it was waking me up in the middle of the night because it was ready for me to start writing. So I did, and immediately I started sleeping well again. But I was writing — doing the physical act of writing — in a way I’d ever done before.

I did what my brain told me to, which was to write in short sessions with plenty of time to reflect on what I’d just written and ponder what I needed to say next — which elements of people’s stories I needed to convey.

I would write by longhand in a chair by my office window for 20 or 30 minutes one morning. Then the next morning I’d type up and revise what I’d written the day before and then print that out, all in another half hour. I’d add to that in longhand by the window the next morning, then go back to the computer the next day, until a draft was done. And that draft is substantially what readers encounter in the finished book.

What was the biggest challenge in bringing this story to life?

The number one challenge was simply being honest with my readers about the full picture of how people respond to tragedy, whether it happens to them, to someone they love, or to people they see on a television screen. It can bring out the best in people, but also some of our worst tendencies. There can be bleakness and immense sadness, but also camaraderie and even humor.

That’s a lot to convey in a picture book, and I didn’t stop tweaking the text — I wasn’t confident that I’d gotten it as right as I could get it — until after I returned to Oklahoma City this past April for the Remembrance Ceremony on the 24th anniversary of the bombing.

Seeing the interactions at the Memorial, touring the Museum with people who were there for the first time (my wife, and the book’s editor and art director), at last meeting in person with some of my interviewees, and attending a private gathering of people affected by the bombing — those all shaped the final changes to my text and to Nicole Xu’s powerful art.

You’ve written about quite a few historical events. What are the similarities and differences in writing about this relatively recent event, compared to writing about things that happened a century or more ago?

For more recent events, there can be — and in the case of the Oklahoma City bombing, there certainly was — a lot more information that is readily accessible. You might not have to dig as much to find it, but you might have to spend more research time comparing and verifying facts and accounts of the event. Those facts and accounts might have been immediately published and widely distributed, but they weren’t necessarily accurate or nuanced or complete.

For me, that heightens my determination to get the facts right and present them fairly, which I believe can make for a better book.

But when you’re writing primarily for elementary school students, “recent” is relative. For students born in the 2010s, events from the mid-1990s may seem just as far removed from their lives as events from the 1870s. For those of us creating nonfiction books for children, our need to establish context and give readers a true sense of a time that they never knew firsthand is just as great.

I’ve noticed that illustrators on your books are often from cultures typically under-represented in children’s literature. Has this been intentional on your part? How did you go about making that happen?

Well, I’ve worked with several publishers, and I should say that it’s never been my call who is going to illustrate any of my books. For some books, I’ve been told, “Here’s who your illustrator is going to be,” and for some I’ve been shown samples from a few candidates, with any preferences I might have being among the things that the art director takes into consideration when she makes her decision.

But I’m also quite comfortable — enthusiastic, even — about suggesting artists who I think would be especially well-suited for transforming my text into an appealing book. And the backgrounds of the illustrators are always something that I take into consideration when I make those suggestions.

I routinely, proactively raise the subject of diversity with my editors when it comes to who illustrates my books and who is depicted in those illustrations, so that more readers are likely to see characters resembling themselves — and see more perspectives, including those similar to their own — in my books.

The editor and the art director and others at the publishing company may well already be having a conversation about this aspect of a book that we’re making together, but the only way I can be certain that diverse representation is part of our thinking is if I bring it up directly.

Tell us about the other titles you have coming out in 2020.

I have just one other 2020 title, it’s coming out right on the heels of All of a Sudden and Forever, and it could not be more different from that book.

On March 10 — five weeks later — Little, Brown will publish my next fiction picture book, Fire Truck vs. Dragon, illustrated by Shanda McCloskey. It’s not a sequel to Shark vs. Train, illustrated by Tom Lichtenheld (Little Brown, 2010),  but it is something of a companion to that 2010 book, since Fire Truck vs. Dragon plays not only with readers’ expectations of what’s going to happen when you put a fire-breather and a fire-putter-outer together but also with their expectations of what will take place in another “vs.” book from me.

Shanda McCloskey illustrated Fire Truck vs. Dragon, and her art style is such a perfect match for this goofy pair of characters. I’m as delighted with the results of that collaboration as I am of my work with Nicole on All of a Sudden and Forever. I’m one lucky author.

I’m amazed by the number of school visits and books you write each year. Can you share your secret for being so productive?

I depend a whole lot on checklists and spreadsheets and calendars and reminders, and I’m boringly detail-oriented and disciplined.

Back when I had a toddler and a day job, out of necessity I started getting up at 5 a.m. six days a week for my writing time. That toddler is about to turn 21, and I left the day job nearly four years ago, but I still keep the same early-morning schedule for my work as a full-time author. Only now it lasts all day, though I usually get a nap.

The main thing, though, is that I love what I do. The research, the writing, the revision, the school visits, the connections in person and online with people who appreciate my work and do great work of their own — all of it. I want to continue earning my place in this ecosystem, and that’s a powerful motivator.

His newest books include Dazzle Ships, illustrated by Victo Ngai (Millbrook Press, 2017),  the Mighty Truck early-reader series, illustrated by Troy Cummings (HarperCollins, 2017) and What Do You Do with a Voice Like That? The Story of Extraordinary Congresswoman Barbara Jordan, illustrated by Ekua Holmes (Beach Lane Books, 2018).

Chris and his wife, YA/middle-grade novelist Jennifer Ziegler, live in Austin, Texas, where Chris has advocated for greater diversity in children’s literature by cofounding the Modern First Library program with BookPeople.