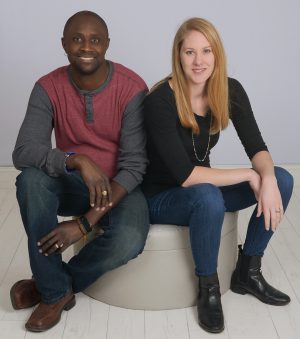 Spring is in the air. Time for planting seeds and stories. Today’s spotlight is on a new picture book author duo, Miranda and Baptiste Paul. While separately they’ve published picture books, their first co-creations were recently published.

This month they’ll begin a U.S. book tour with Tantoh Nforba Dieudonne, the subject of their newest picture book, I Am Farmer: Growing an Environmental Movement in Cameroon, illustrated by Elizabeth Zunon (Lerner, 2019). 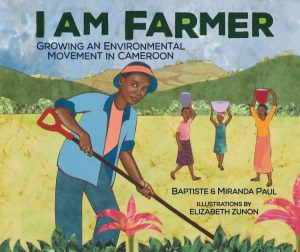 I Am Farmer highlights the work of an environmentalist and farmer in Cameroon. How did that story idea come to you?

We’d met Farmer Tantoh about eight years prior to the book’s release at a Toddlers for Diversity playgroup, where he was the presenter. We’d learned about his environmental work and kept in touch while he went to school in our city.

When he returned to Cameroon, we kept an eye on the remarkable ways he was growing a movement there, and the awards his work was winning.

Fast forward a few years, and we began conducting phone and online interviews with Tantoh. The following year we arranged to make a research trip and visit his hometown, gardens, and water projects in Northwest Cameroon. We did some of the writing before traveling there, but a lot of revising and adding to the work happened while we were there with Farmer Tantoh.

It’s pretty incredible for us as a couple to get to work together on something meaningful, and carve out a life you love with the person you love. 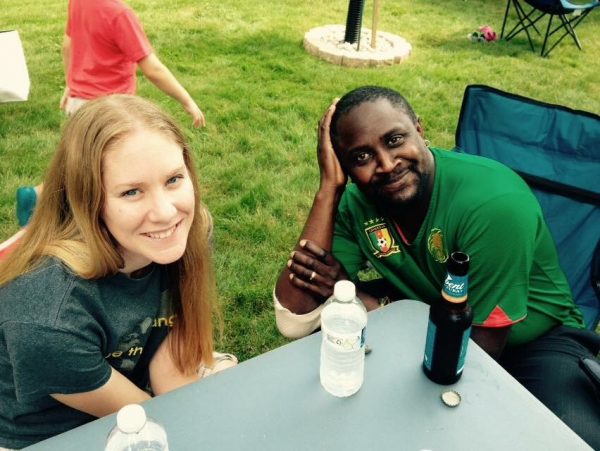 While we were in Cameroon, we also took research photos and videos to share with illustrator Elizabeth Zunon for reference.

We’re very excited to announce that Tantoh has now arrived in the United States to complete a book tour with us, similar to how Isatou Ceesay has toured with Miranda for One Plastic Bag: Isatou Ceesay and the Recycling Women of the Gambia, illustrated by Elizabeth Zunon (Millbrook, 2015).

We hope that many of you will get to meet him and learn how to support his important efforts. And thank you to those of you who wrote letters on his behalf after his visa was unjustly denied!

Speaking up has made a difference.*

*If you haven’t researched what’s happening politically in the northwest region of Cameroon, near Bamenda, we encourage you to read up. Tantoh’s grassroots work and ability to be able to travel abroad is threatened daily by expanding violence and conflict in his hometown.

It’s difficult enough to do environmental work in rural regions like his, but even tougher when volunteers from outside the area are afraid to travel and offer assistance.

Now more than ever, this book and the book tour will play a critical role in spreading the word about the important work he is continuing. Visit Save Your Future Association for more information about Tantoh’s charity.

I Am Farmer is the second book you’ve co-authored together, following Adventures to School: Real-Life Journeys of Students From Around the World, illustrated by Isabel Muñoz, (little bee books, 2018), which was published last summer. Tell us how the idea for that book came about.

Adventures to School is not your ordinary book, so it had an out-of-the-ordinary path.

Our agent and an editor came to us with an article about exceptional, unusual, and even dangerous journeys that kids around the world make to get to school.

Baptiste immediately recalled memories of walking to school barefoot, or with rubber shoes that burned his feet as he traversed up the mountain road in Grace, St. Lucia. Miranda (not-so-fondly) remembered riding the bus—with dozens of unsupervised kids and a bus driver who twice backed into a high voltage power-line poles and occasionally got them stuck in icy ditches. 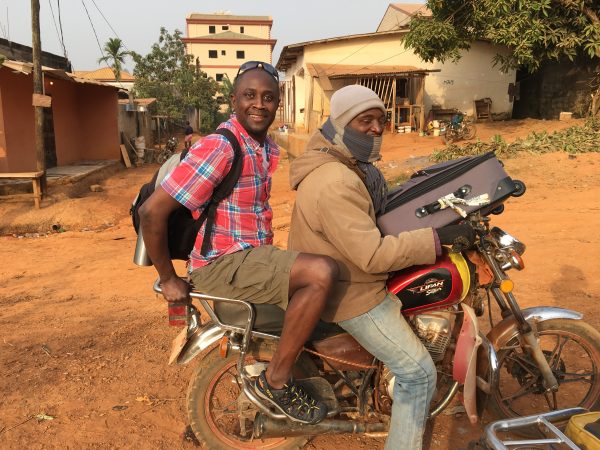 Even though we each had interesting personal stories about getting to school, we wondered how many of the captions in the article might be exaggerated. Were the sources traceable? Were the photos even current?

Any researcher knows to be skeptical of clickbait on the Internet, and that context (including date the photo was taken) is everything.

While we discovered some stories from that article to be very outdated, we were able to track down several real children and their extraordinary stories or modes of transportation. We reached out to our global network of colleagues to explore other unique stories not in the original article.

In the end, all of the stories that made it into the book are based upon real kids. Their names are not used, and voices are fictionalized for various reasons, including to protect their identities or to combine several stories into the single narrative required for the format requested.

Because there’s often little representation of many of the countries where our characters live, our editor also wanted sidebars with more information about each of the nations. We did our best to include facts that would be of interest to children as well as introduce these countries in neutral, positive, or diverse ways.

It’s not really a fair task to write a summary of an entire country in 50 or 100 words, but picture books have a limited amount of space and there needed to be room for illustrator Isabel Muñoz’s art to tell these stories as well. We also know that teachers need and use these types of books all the time.

We hope this book will hook children’s interest in learning more about the lesser represented places in the book. After all, interest in a place or culture has the potential to turn into knowledge, familiarity, personal connection, and, ultimately, empathy.

How did the actual writing occur? Did you both brainstorm ideas and locations and then divide up the work and share drafts? Work on it jointly? We want all the details.

People often ask if we want to kill each other while we work together.

No, absolutely not! But our cats sure do get in the way…. 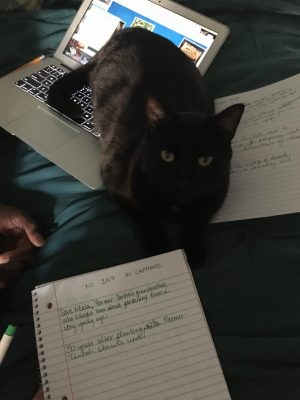 We had a fairly tight deadline, so we knew we had to divide some of the work.

We brainstormed together and then went straight to research.

We printed articles, emails, text messages, interviews, and photos from sources. Then we literally taped up transcripts and printouts all over the walls of our guest bedroom so each of us could “see” the progress the other was making on determining which stories would ultimately make it into the book (we researched 21 kids/areas, but knew that only 10-15 would probably fit in the final book).

Our schedules don’t always mesh, but there would be times when we were both working on it—albeit in different rooms of the house. We’d convene at the oddest hours and make key decisions.

Were there any unexpected challenges in writing the books together in terms of process or otherwise?

We’re really grateful that we had each other for the project—in our estimation, it would have been too much for a single person. It was kind of like “the more the merrier” with this project, because more than 30 people in 14 countries helped us with translation, research, videos, and connections on the ground while we wrote it.

Making the decision to write in fictionalized, first-person voices was not our original intent. But third person didn’t allow the same feeling of connection, and getting clearance permissions in 14 languages to use first and last names, ages, or other identifying information wasn’t a possibility with the deadline we were given. 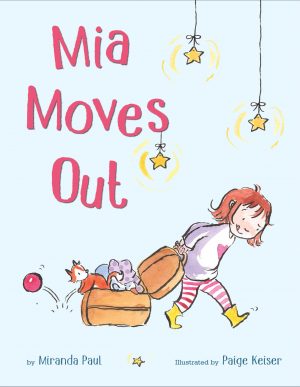 Any other writing for children and teens that we’ll see from you two in 2019 or beyond that you’d like to share?

Last fall, Mia Moves Out, illustrated by Paige Keiser (Knopf, 2018) is Miranda’s book about an adopted girl looking to make a place for herself after getting a new brother.

Also, watch for another Baptiste Paul book deal (or two) to be announced soon…! 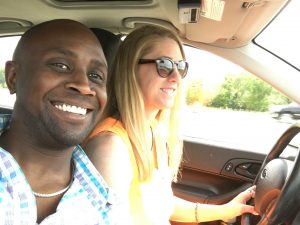 Miranda Paul is the award-winning author of One Plastic Bag and Water is Water, illustrated by Jason Chin (Roaring Brook, 2015), both Junior Library Guild selections. Whose Hands Are These? (illustrated by Luciana Powell (Millbrook, 2016)) was named an ILA Teacher’s Choice and Are We Pears Yet? (illustrated by Carin Berger (Roaring Brook, 2017)) won the Award of Excellence in Children and Young Adults Literature from the Council on Botanical and Horticultural Libraries.

Miranda Paul is an annual faculty member at the Highlights Foundation and a co-founder of the nonprofit organization We Need Diverse Books, for which she currently serves as Mentorship Chair.

Baptiste Paul grew up in St. Lucia, where at age seven he propagated a root cutting that still produces breadfruit for his family. He holds degrees in Environmental Science and Political Science from Bucknell University and is the author of The Field, illustrated by Jacqueline Alcántara (Simon  & Schuster, 2018), which received starred reviews from Kirkus, Horn Book, and Booklist. His second picture book, Adventures to School (little bee, 2018), is also co-authored with Miranda Paul.

Her forthcoming works include: At the Mountain’s Base illustrated by Weshoyot Alvitre (Kokila, Sept. 17, 2019); Indian No More, a historical fiction middle grade novel co-authored with the late Charlene Willing McManis (Tu Books, Fall 2019); and, Powwow Day illustrated by Marlena Miles (Charlesbridge, Apr. 21, 2020). Traci is an enrolled citizen of the Cherokee Nation and lives in northeastern Oklahoma, where her tribe is located. She is represented by Emily Mitchell of Wernick & Pratt Literary Agency. Follow Traci on Twitter and Instagram @tracisorell. 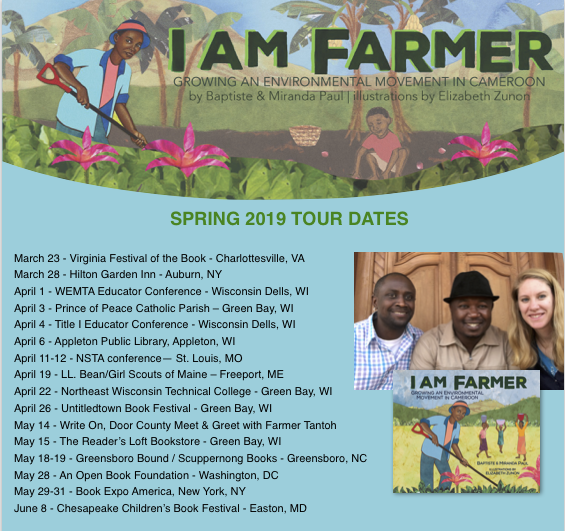