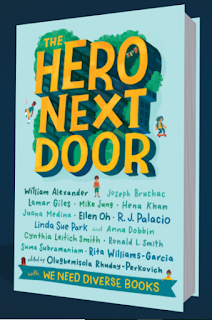 Not all heroes wear capes. Some heroes teach martial arts. Others talk to ghosts. A few are inventors or soccer players. They’re also sisters, neighbors, and friends.


Because heroes come in many shapes and sizes. But they all have one thing in common: they make the world a better place.

Published in partnership with We Need Diverse Books, this vibrant anthology features thirteen acclaimed authors whose powerful and diverse voices show how small acts of kindness can save the day.


So pay attention, because a hero could be right beside you. Or maybe the hero is you.

“Let’s just admit it: query letters are hard to write. Where do you even begin? In this short video, we explain how to open your query in a way that conveys a ton of information while hooking an agent’s interest.”

Paper For Books Is Getting Harder To Come By: Why The Backbone of Publishing May Make Book Prices Rise by Kelly Jensen and Tirzah Price from Book Riot. Peek:

“As it stands now, finding the big, buzzy books at your local bookstore shouldn’t be challenging and the titles you wish to gift should be readily available. In the instances this isn’t the case, it’s likely due to paper and not tariffs.”

“… it is imperative to have a website…Think of it as your mailbox on the World Wide Web…It’s not necessary to sink a whole lot of money into the project and websites don’t have to be super-fancy, either.”

One Important Way You Can Help Your Book Publicist by Sharon Bially from Writer Unboxed. Peek:

“…send the reporter, editor or interviewer an easy-to-digest chapter-by-chapter summary of your book. A summary makes it much easier for our media contacts to move forward with coverage, and to do so sooner rather than later. This gives your book a huge advantage over all the others in journalists’ ‘to-read’ piles.” 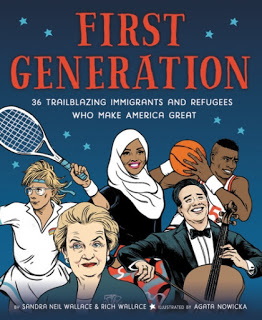 “I wanted to provide you, dear readers, with a list of really good, diverse kids books with multicultural characters you might want to buy for holiday presents. Most of these titles are new or newer and I’ve included options for little kids up to teens.”

Five YA Stories Featuring Native Voices To Read This November by Hilli from Book Page. Peek:

“…Thanksgiving…presents the perfect opportunity to think about the importance of the many Native communities and voices that are still so often overlooked in literature. Here are five excellent reads featuring a wide range of Native teen characters that are worth adding to your TBR list.”

“We join our trans, gender nonconforming, and nonbinary family members, friends, and neighbors near and far in celebrating the lives of trans people…Here’s an updated roundup of resources to help spread understanding and inspire action from The Horn Book’s archives and beyond.”

“If you’re looking to explore the rich world of Native American literature with your family, the following wonderful middle grade titles are a great place to start. (Thank you to the First Nations Development Institute who graciously let us share their list … and to Debbie Reese, Ph.D., who chose these books.)”

“But a new kind of masculinity is emerging. One that is balanced…One that understands that there’s power in vulnerability, and that there are things to learn about how and when to put up our shield and brandish our sword, and when to take it down.” (Part I of the speech is here.) 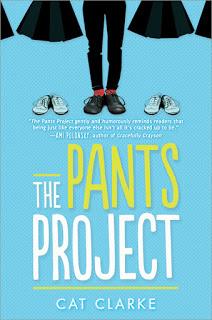 The CCBC’s Diversity Statistics: Spotlight On LGBTQ+ Stories by Madeline Tyner from The Horn Book. Peek:

“We received very little LGBTQ+ fiction for middle-grade readers (two being Star-Crossed by Barbara Dee (Aladdin, 2017) and The Pants Project by Cat Clarke (Sourcebooks, 2017)). The lack of this literature is unfortunate, as children in upper elementary and middle school are often beginning to question their sexual orientations or gender identities…”

“Kids In Your Schools Are Native 365 Days Of The Year:” Publisher Pushes For Better Representation In Books by Zoe Tennant from CBC Radio. Peek:

“Each year when November approaches, Reese gets inundated with phone calls and emails from schools and libraries asking her for book recommendations. November, in the U.S., is Native Heritage month. Reese appreciates that people are reaching out to her, but said it’s not enough.”

Backstory Tips And Tools by Dean Gloster from Through The Tollbooth. Peek:

“Ignorant characters…are great for providing an excuse to work in backstory. That’s one reason the two staples of storytelling—a stranger comes to town and a character goes on a journey—work so well: Someone who is ignorant learns about the story world along with the reader.”

“During a lunch break, for instance, consider setting 30 minutes of time aside for a writing sprint, where the focus is on fast, unedited writing on a certain scene. Doing so allows the words to get on the page, and they can be edited at a later time…”

“Don’t fall into the trap of thinking that all you need to do is insert dragons or graphic-novelly illustrations or robots or narwhals or fart jokes into your work to guarantee it will have wide middle-grade appeal. Be genuine.”

The Pitfalls of Self-Editing by Jim Dempsey from Writer Unboxed. Peek:

“The simple answer is: self-editing isn’t enough. And here are three—among many other—reasons why:” 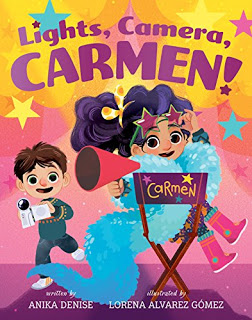 “When I’m working with an author, I still have a place as a narrator but I’m working with someone else’s universe and I have to respect its rules while giving an interesting interpretation of it.”

STEM Tuesday- Peeking Into The Mind Of A Scientist/ Engineer- Interview With Author Heather L. Montgomery by Mary Kay Carson at From The Mixed-up Files of Middle-Grade Authors. Peek:

“For years at school visits or educator conferences, I talked about dissecting that road-killed rattlesnake. Those audiences showed me the power of story. They taught me to play a game, balancing information and story.”

“I never intended to write about politics. In fact, I never even considered writing historical fiction either. It all just happened organically. The calling to write about our historical footprint in these ‘United States’ came from the discovery of hidden histories in America.”

“…how could I ever write anything new? But like any genre, you have to trust that the story you have to tell is uniquely yours. And unlike other genres, fantasy writers have to accept that to a certain extent, it’s impossible to avoid every single trope.” 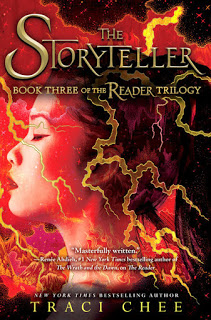 Q & A With Traci Chee by Sara Grochowski from Publishers Weekly. Peek:

“My desire to write a more egalitarian world was a huge part of the worldbuilding, too. I wanted the world to be more ethnically diverse and more inclusive of women, transgender, and nonbinary people.”

Jim Hill Talks With Robin Kirk About The Bond by Jim Hill and Robin Kirk from Through The Tollbooth. Peek:

“I love science fiction. It pushes us a little beyond where we are but with human behaviors that are familiar and even predictable. For instance, when Margaret Atwood was writing The Handmaid’s Tale (McClelland and Stewart, 1985), she was careful to include only elements with a historical precedent.”

Q & A With Arwen Elys Dayton by Sara Grochowski from Publishers Weekly. Peek:

“…when I’m writing science fiction, I fill myself up with research until I’m saturated, then it’s in the background. The research isn’t really the point, it’s the context for the personal, intimate stories.”


Small Bookstores Are Booming After Nearly Being Wiped Out by Jill Schlesinger from CBS News. Peek:

“A growing number of shoppers will be supporting their independent neighborhood bookstores on Small Business Saturday. After nearly being wiped out a decade ago, small bookstores are booming.”


WNDB Announces The 5 Recipients of the 2018 Walter Grants from We Need Diverse Books. Peek:

“We Need Diverse Books™ is thrilled to announce the winners of the 2018 Walter Dean Myers Grants. The following 4 unpublished writers and 1 writer-illustrator have been selected for the grants: Adriana Hernández-Bergstrom, Sonia Chopra, Yasmine Mahdavi, Nicholas Solis, Trisha Tobias…The 2019 Walter Grant cycle will open to applications next year in the late spring.” 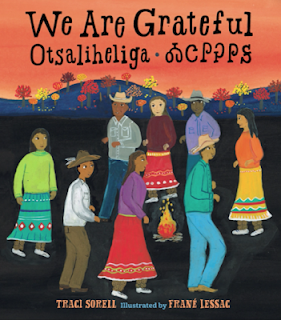 Congratulations to writer Sandra Neil Wallace and illustrator Bryan Collier for winning the 2019 NCTE Children’s Book Award with Between the Lines (Simon & Schuster, 2018)!

Congratulations to all the honor book winners, including Orbis Pictus Honor Book winners writer Traci Sorell and illustrator Frané Lessac for We Are Grateful (Charlesbridge, 2018)!


This Week At Cynsations


Thank you to ALAN Workshop for featuring me as their Monday morning keynote speaker. It was a pleasure to share stories and reflect on Native literary sensibilities with such a highly engaged group of teachers. Thanks also to Candlewick Press for sponsorship and support.

Power, Agency, and Hearts Unbroken by Cynthia Leitich Smith from Uma Krishnaswami at Writing with a Broken Tusk. Peek:

“…articulates questions about representation and voice and the human tendency to pronounce judgment with limited information. Questions about history and privilege, about who has power and why. Questions that push back against the daily indignities, large and small, so often inflicted upon minorities in America, and push back as well on commonly held historical myths and emblems of public nostalgia.”

Hearts Unbroken (Candlewick, 2018) was chosen as this week’s Book of the Week from the Cooperative Children’s Book Center. Peek:

“…lively, illuminating novel. …explores difficult truths and hard decisions even as it entertains.”

“The casual ignorance that people in the United States seem to possess was already mind-boggling to me as a white person, but reading about that same ignorance (not to mention flat-out racism) from a Native American perspective was eye-opening, to say the very least. I truly hope this book goes on to a ton of success…”

Book Page says of Hearts Unbroken: “Through Lou’s funny and honest narration, readers will gain some valuable insight….. Although this read deals with plenty of heavy cultural issues, Smith balances the main plot with a poignant romance….”

I’m really glad I decided to do NaNo this year. About half of my word count has been actual scenes and the other half has been side writing and brainstorming. Still, that’s more scenes, side writing or brainstorming than I would have done without the social pressure. The more I write the more excited I get about my novel, too.

Now I need to figure out how to add social pressure to December!


This week I got my nonfiction fix by taking my thirteen-year-old to a presentation by Liza Mundy, author of Code Girls:The Untold True Story of the American Women Code Breakers of World War II (Hachette, 2017).

Mundy gave a fascinating talk about how she came to learn about the women who were breaking codes in World War II and their little-known story.

Since, we’ve found out that my husband’s great-aunt was one of these code breakers! I love that there’s both an adult and young reader’s edition of this book.


What One Person Can Do To Get People Reading