After years of writing you finally have your very first book deal! Now what? How do you promote your debut novel? I talked to four Maryland debut authors from the Electric Eighteens to get the inside scoop on how debut groups for young adult and middle grade authors work.

Let’s start with some basic introductions. Tells us about your book and your publishing journey.


J.H. Diehl: Tiny Infinities (Chronicle, 2018) is a contemporary novel for ages 10 and up. It’s about a competitive swimmer whose dedication to her sport, unlikely new friendships, and science experiments with fireflies all combine to help her navigate the tough summer she turns thirteen, when her parents split up and her mom suffers from depression.

Lauren Abbey Greenberg: The Battle of Junk Mountain (Running Press, 2018) is a middle grade contemporary novel that tells the story of a friendship in peril, a grandmother who’s a hoarder, and the danger of trying to hold on too hard to one’s past.

Jonathan Roth: I write and illustrate a humorous chapter book series, set in space school, called Beep and Bob (Aladdin, 2018). Books one and two released (Beep and Bob: Too Much Space! and Beep and Bob: Party Crashers) March 13, book three (Beep and Bob: Take Us To Your Sugar) releases in September.

I wrote many picture books and middle grade novels before discovering that the sweet spot for me seems to be the six-to-nine-year-olds right in the center.

Deborah Schaumberg: The Tombs (Harper Teen, 2018) is a young adult historical fantasy set in 1882 New York. It is about a young aura seer who must free her mother from the Tombs asylum where seers are being experimented on and used against their will.

My publishing journey began many years ago with a middle grade novel. After tons of rejections I started over, writing for young adults, and finally found an agent through a SCBWI conference.

Who are the Electric Eighteens? 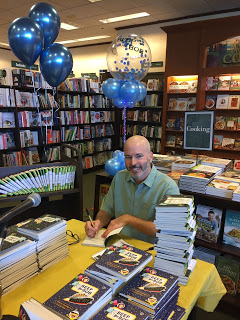 Jonathan Roth: The Electric Eighteens are a merry band of international debut middle grade and YA (and some chapter book, like me) authors who support each other online and in person through the highs and lows of the publishing process, through networking, reading advance copies of each other’s books, attending launch events, and dozens of other large and small ways.

Unlike earlier debut groups, we do not have any specific marketing requirements. It is more about helping each other as we are each able.

Deborah Schaumberg: [It] is essentially a support group. It’s like holding hands to jump in the pool!

J.H. Diehl: The group is run by volunteers, who put up and maintain a website, a closed Facebook group, a complicated set of ARC tour spreadsheets and a wonderful series of weekly member interviews.

Smaller sub-groups have organized ‘pods’ on Instagram and meetups at conferences, festivals and launch events.

How did you find out about the Electric Eighteens?

Deborah Schaumberg: Word of mouth. I found out about the Electric Eighteens from someone in a new critique group that participated in the Sweet Sixteens when her book was published.

J.H. Diehl: In August 2017, when my book’s final edits were nearly done, and I allowed myself to think ‘this is really happening’, I did an online search for a 2018 YA/middle grade debut group. I’d seen prior year debut groups and thought it would be great to join one. I didn’t know just how great until I became part of the EEs.

Jonathan Roth: I was a member of the Swanky 17s (rebranded as the 2017 Debut Group) and like many from that group, had my release date bumped to 2018. So I promptly applied and jumped over.

Though having to wait six months longer for what already felt like an eternity was initially a bit of a downer, I find having two groups of new friends has turned out to be a real blessing. Don’t fear the bumper!

Lauren Abbey Greenberg: Jonathan set up a monthly local SCBWI get-together, and it was there where I met him and Deborah and learned about the group.

Deborah invited me in and introduced me and instantly I had tons of people welcoming me, complimenting my book cover – it was an amazing feeling.

How have the Electric Eighteens helped you in promoting your book and how has it help you build a local community? 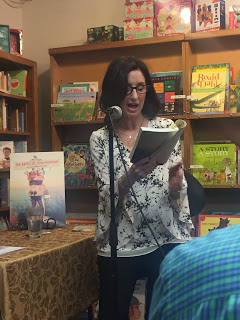 The ARC tour is extremely effective because often an EE member will post a picture of your cover with either a shout-out or a full review and you can share that across all your social media platforms for maximum exposure.

I do feel a kinship between us four local authors, all from the same county, and I enjoy seeing them face-to-face once a month.

Jonathan Roth: Beyond the typical online sharing, I have attended many ’17 and ’18 debut book events in the D.C. area, and was thrilled to have a number of debuts attend my launch.

Though I greatly appreciate being able to connect online with other 18s around the country and world, being able to sit around a table or chat at conferences with people is my preferred method of networking.

Also, I suspect most promotion is actually invisible (when I talk up books to fellow teachers and media specialists at the school where I teach, for example).

There have been some helpful threads in the Facebook group about book swag.

Thanks to the EEs I found a terrific designer for bookmarks and other items, YA author Kristen Rae, a member of a previous YA-middle grade debut group.

What have you learned about book promotion from being in the Electric Eighteens?

Jonathan Roth: Though we share all sorts of helpful tips with each other, my main take away about promotion is that no one actually knows the proven path, but we’re all stumbling down it together.

Lauren Abbey Greenberg: I’ve learned about a whole community of librarians and teachers that are active on social media and willing to review and share ARCs. They are an awesome resource, especially for middle grade authors, because if they like your book they will shout it from the rooftops!

Deborah Schaumberg: I’ve learned so much from my fellow Electric Eighteens!

As someone that is not particularly tech-savvy, I can watch to see what other people do. As a result, I have created a book trailer, learned what a GIF is, and learned how to post on Instagram. We discuss what is working and what isn’t.

What surprised you about being in the Electric Eighteen group?


Deborah Schaumberg: How close I feel to many of the Electric Eighteens members. 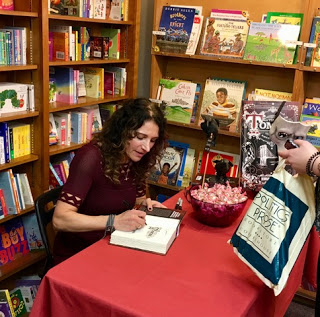 Writing is such a solitary endeavor; we usually don’t have people around us when we write.

And as an introvert, I’ve been to events where I was too shy to talk to people I didn’t know.

At a recent conference I met another EE for the first time. I immediately hugged her hello because I felt like I knew her already from all the online sharing.

There’s also a tendency to fall into the comparison game. Why didn’t my book didn’t get a starred review? Why am I not booking as many events as so-and-so?

You have to pull back sometimes and remind yourself that each publishing journey is unique.


Lauren Abbey Greenberg: Embrace this opportunity. Learn from each other. Share. Support. Cheerlead. It’s a special club, and I’m proud to be a member.

J.H. Diehl: Go into to it knowing you can participate as much or as little as you feel comfortable with, and get ready to be surprised and humbled by the support you’ll experience from the other debut authors in the group.

Go into it knowing it’s a great opportunity to give support to your fellow writers and also to experience tremendous gratitude.

Deborah Schaumberg: Also, the way the administrators of the Electric Eighteens structured the group works really well. I think past groups had lots of rules about how many advanced reader copies each member had to read and so on.

We are a support system only, all promotion is voluntary, and we are respectful and inclusive. I never feel pressured to do more than I can handle and I participate as much as I want.

Jonathan Roth: The groups grow to up to 200, so it’s pretty impossible (at least for me) to bond with everyone and/or read all their books. Like so much in life, you get out what you put in, but be selective and realistic. And most of all, be excellent to each other (and party on, debuts)!