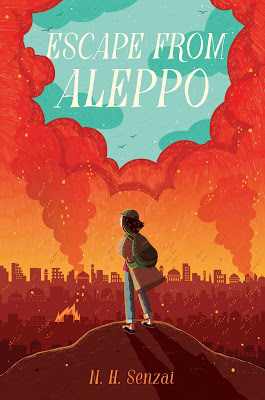 The reason I love writing for the middle grade audience is because at this age kids can still suspend belief and journey with you through a story as long as you create believable plots, authentic characters and dialogue that rings true.

However, you need to hook them in quickly, so my first goal is to create a story that “reels them in.”

Once they’ve signed on to follow your protagonist, you can present heavy topics, such as war and conflict, as long as it’s age appropriate and presented in a nuanced manner.

At its heart, my new novel, Escape From Aleppo (Paula Wiseman Books, 2018), is an adventure story about a girl, Nadia, who becomes separated from her family as they flee war in their home city.

Stranded alone, Nadia has to overcome her fears, make alliances with strangers and come up with creative solutions to solve the challenges she faces so that she can reach the Turkish border and find her family.

I chose to write about the Syrian war after much deliberation as it was a tremendous responsibility to accurately portray the horrors of war while also sharing the country’s rich culture and history.

But as a writer I feel that we have a moral obligation to tell our readers the truth, no matter how difficult.

With the advent of social media and a 24-hour news cycle, kids are exposed to current events and have probably heard about the Arab Spring and the conflict in the Middle East.

However, they probably don’t know much about its root causes, such as colonialism, religious sectarianism etc., that led to this terrible point in history.

But, if given the facts in the right context, they have the ability to weigh and analyze serious topics and can come up with their own conclusions.

Frankly, we shouldn’t be afraid of shocking them about how terrible humans can be to one another, whether around the globe, or in own back yards. Without sharing harsh realities, in a way digestible format for that age group, you cannot hope to dissuade a future generation from committing the same crimes over and over again.

Aleppo before and after the battle, from BBC News

When writing Nadia’s story, I didn’t want my reader’s only frame of reference of Syria to be of war and of refugees fleeing death and destruction.

Aleppo is one of the oldest continuously inhabited cities in the world, predating the Pharaohs, occupied by Alexander the Great, the Romans, Ottomans and the French. It’s a truly unique city whose destruction over the course of the war has been heartbreaking.

Through flashbacks and Nadia’s reflections as she makes her way through city, I wanted to showcase Aleppo’s beauty, architecture, culture, history and food through her eyes.

I also wanted to show how normal Nadia’s life was before the war and how she was like any other teen around the world; she had a loving family, friends, supportive teachers, a cat named Mishmish (which means apricot in Arabic) a sweet tooth, a passion for Arab Idol and a dislike of Algebra.

In showing the two sides of the coin, life during peace and conflict, I wanted to illustrate how anyone’s normal, everyday life can be turn upside down in a matter of moments.

As Americans, whether we consciously realize it or not, we have a particular connection with refugees; at one point of time, most of our families sought refuge in this country. They arrived from all around the world, fleeing war, persecution, famine or just hoping to find a better life for themselves and their children.

If we pause to reflect on that connection I hope that we can share in a common humanity. So, even though Nadia is from a “faraway place,” my hope is that no matter how different the characters in Escape From Aleppo may appear, readers can walk in their shoes and realize that people, no matter where the live, are intrinsically the same. They have similar hopes, dreams and desire to live a peaceful, meaningful life.

Nadia is more like us than we think – at the end of the day my greatest wish is that my readers build bridges of understanding with others, rather than walls. 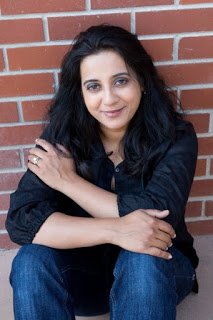 See the reading group guide for Escape from Aleppo from the publisher.

Booklist gave Escape From Aleppo a starred review. Peek: “Filled with kindness and hope, but also with the harsh realities of the horrors of war, this heartbreaking book is a necessary reminder of what many people live through every day.”

She grew up in San Francisco, Jubail, Saudi Arabia, and attended boarding school in London, England, where she was voted “most likely to lead a literary revolution” due to her ability to get away with reading comic books in class.

She has hiked across the Alps, road-tripped through Mexico, swum with barracudas in the Red Sea, taken a train across the Soviet Union, floated down the Nile, eaten gumbo in New Orleans and sat in contemplation at the Taj Mahal.

She also attended U.C. Berkeley and Columbia University, while pursuing her passion for writing. She once again lives in San Francisco with her husband, a professor of political science, her son, and a cat who owns them.

Gayleen says: Other titles focusing on Syria include: 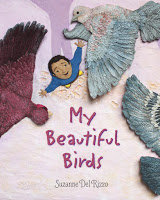 For more titles related to war and peace in children’s and young adult books, check the resources on Cynthia’s author site.