“So, wait, you’ve been doing this for how long?” People often ask when I tell them how long I’ve been writing.

“Since the fourth grade,” is the answer. That was the grade in which I learned that I wanted to be a writer—specifically a writer for children.

I learned then that there was nothing that felt better to me than being around children’s books. Discussing them, holding them, reading them, and, most of all, writing them. I wrote my first book when I was 12 and began submitting it when I was 13.

My first rejection letter (a physical one! back when we were still in the snail mail days) came from Scholastic Press.

I framed it, because it meant that I was officially On My Way to becoming a published author. The book itself was about a mercenary who slew monsters and who helped a princess return to her rightful throne—after falling in love with her, of course. (It was pretty derivative, but hey! I was twelve!)

I did not get published at twelve (thank God!) but I did learn that a book can be written and, moreover, that I can write one. I learned that all I wanted was to learn how to tell—really tell—the stories that were in my mind. So I focused my life toward learning how to be a writer.

The path, as it turned out, was filled with both beauty and tragedy that would shape my writing forever. The tragedy, however, is another story for another time, and one that I do hope to address here at Cynsations, so I’ll focus on the beauty for now.

I went to the University of Houston, where I focused on Creative Writing, of course.

I remember being the only one in the program who wanted to write for children—something that seemed to confuse my peers and professors at times. Most of my peers were working on short stories geared toward adults, and writing short stories is an entirely different beast, indeed. But alongside them, I learned invaluable things about style and method. Also about art.

My illustration flourished, and I’m finally fairly happy with it. 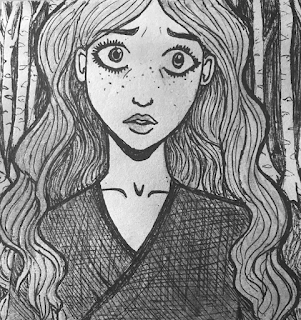 Houston is where I became accustomed to hurricanes and floods and unending summers, where I learned what “genderqueer” meant, and that it applied to me.

It is where I made most of my lasting friendships. It’s where I tried drag for the first time, and learned that I make a pretty good Freddie Mercury and a pretty good John Waters (shown here with my best friend, Austin drag queen, Honey St. Clair.) 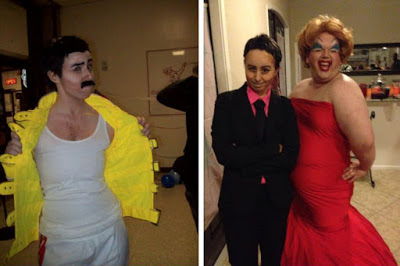 It’s also where I met my husband, who is the best person in the entire world, and without whom I don’t know where I’d be.

From there, I applied to my dream school, Vermont College of Fine Arts, one of the only places that has an MFA in Writing for Children and Young Adults.

When I got in, I actually screamed—something I’d never usually do. It was an amazing, incredibly worthwhile experience that helped inform my writing and my character in more ways than I can describe. 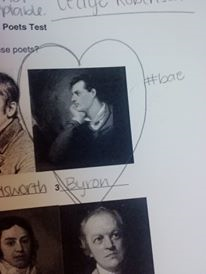 Since then, I’ve worked in many different aspects of writing, literature, and education.

Selling books at the Strand Bookstore in Manhattan. Trying to keep banned and challenged books on the shelf with the National Coalition Against Censorship. Editing and Performing for a regional publisher in Texas.

And, of course, my day job, teaching American and British Literature at a Title 1 high school in Houston. (Where I get art like this on tests about the Romantic Poets.)

I am now represented by my dream agent, Sara Crowe of Pippin Properties, and am doing my best to balance work and life and love and writing.

Ultimately, however, I have learned that there is nothing better and more rewarding than writing for children. It is what has saved me, and I sincerely hope that I can help others who needed it as much as I did.

Kate has sold the YA manuscript that will become her debut novel, Elysium Girls, to Hyperion for publication in winter 2020.