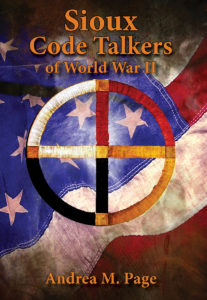 In World War II, code-making and code-breaking reached a feverish peak. The fabled Enigma Cipher had been broken, and all sides were looking for a secure, reliable means of communication.


Many have heard of the role of the Navajo Code Talkers, but less well-known are the Sioux Code Talkers using the Lakota, Dakota, and Nakota dialects.

Told by the great-niece of John Bear King, who served in the First Cavalry in the Pacific Theatre as a Sioux Code Talker, this comprehensively informative title explores not only the importance of the indigenous peoples to the war, but also their culture and values. The Sioux Code Talkers of World War II follows seven Sioux who put aside a long history of prejudice against their people and joined the fight against Japan.


Please describe your pre-publication craft apprenticeship. How did you take your writing from a beginner level to publishable?


Great question. When I really set my mind to writing this story for publication, I enrolled in children’s writing courses at our local Writers and Books. I remember the first course was Writing Children’s Picture Books.

When starting out, I really thought the story would make a fine picture book. Very quickly, the instructor, Jennifer Meagher, gently informed me that the story was not a picture book and suggested a middle grade format.
I tried fiction, then nonfiction, and over time, she helped me frame my book based on some mentor texts we located. Once I accepted the lengthier format, I knew what parts needed more research.

I formed a critique group, then another, and a third one with Jamie Moran and Kathleen Blasi. We added a few more writers to the group. People came and went, leaving Kathleen, Elizabeth Falk, Keely Hutton, and me.

During all this time, I devoured every craft book I could find. I attended SCBWI conferences, including the one in New York City. Then I landed on a novel idea- the online course. I took a non-fiction writing course from Laura Purdie Salas and began to look at myself as an author-in-training.

Eventually, I sent a round of query letters out and Pelican Publishing Company responded. After reading my manuscript, editor Nina Kooij explained they might be interested if I doubled my word count.

I was excited, but at that time, I had no idea how to double my word count. I knew I put all my solid research in the manuscript, I didn’t know what to do. But, I was not going to give up.

I took a self-imposed sabbatical to study the craft of writing.

I studied mentor texts, I joined online writing groups, and heard tips about other intriguing books on author’s craft. I read and I wrote. And then one day, I found the Call of the Writer’s Craft (Simon & Schuster, 2009) by Tom Bird. His technique opened the door for me.
Basically, you access the right brain, write fast, and write a lot. I stopped editing lines and wrote about topics in my book in no particular order. I filled a huge, blank sketchbook. (I still write this way today) I found my voice while piecing together the chapters in my book.
In a few months, I more than doubled my word count. Revisions were easier. I resubmitted to Pelican Publishing Company five years later. I had more tasks to complete before I received a contract. But my contract finally came!

One cannot do this job alone. Having lots of writing friends helps raise the bar, sets high expectations, and keeps me moving forward.

I’ve had many opportunities at RACWI meetings to meet and learn from established authors. Studying the craft under mentors like Carol Johmann, Vivian Vande Velde, Linda Sue Park, Marsha Hayles, Ellen Stoll Walsh, Robin Pulver, M.J. Auch, Peggy Thomas and many others has been quite a gift over the years.

It’s been quite a journey from novice to published author. I’ve been blessed with wonderful writing friends who stand by me, cheer me on, and encourage me to dedicate my life to the craft of writing because that is who we are- writers and readers.

I encountered many hurdles while writing this book. 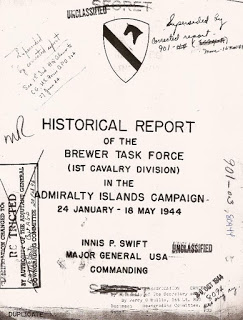 While researching at first I couldn’t find any documentation about the Sioux Code Talkers. Back then and even today, people are well aware of the Navajo Code Talkers. (There are a few reasons for that, which I explain in my book.)

My uncle’s unit only had seven men used as code talkers and their orders were top secret, so they couldn’t talk about their service for many years.

By the time the papers were declassified, several men had died. I had the opportunity to interview one several times, but I wasn’t asking the right questions and his memories were vivid but not detailed enough for me to follow a solid trail.

Once I had a path to follow, I ran into other obstacles.

Service records were destroyed in the St. Louis fire years before, historical records for the unit were minimal since the 302nd Rcn Troop was an unusual unit. Most members never attended the Cavalry Associations reunions. I did manage to meet the commanding officer of the unit at one reunion. We became close and he started sharing copies of his documents.

I mentioned my determination to become a better writer in the previous answer. One added hurdle was trying to figure out the best way to tell this story. I kept planning, organizing and revising.

One revision meant that I pulled everything apart, reorganized and wrote again – 35 different ways over 20 years.

There were many times over the course of 20 years that I had negative, internal thoughts:

What if I’m not meant to do this? What if I get it wrong? I’m not a history person, I’ve never been in the military. So many people are expecting me to get this right. I’m a terrible writer. I’m too shy to put myself out there in the world. What if nobody likes my writing? I know I have no style or writing voice. I’m so tired- this is taking too long.
This is where critique partners and a writing group are needed. They helped me re-frame these negative thoughts and keep moving forward. They are my biggest cheerleaders and I am theirs.
We all know what we (writers) are going through with each low point as well as each highlight. We are connected to each other and share the highs and the lows together.

I tried to stay organized by recording names, dates, all the citation information as best I could.

However, I wish I would’ve logged the details right from the beginning.
When I was going through my final edits, I realized I couldn’t find one source for a quote. I looked through my nearly 10 bins of research, but couldn’t locate the quote’s documentation. I had to bail on that quote and find a similar one that could be cited in the bibliography.
The second quote was adequate but not as powerful. So, I learned a valuable lesson as a nonfiction writer.

As a member of a community underrepresented in youth literature, what did your diverse perspective bring to your story?

Watching historical movies became part of my research process. My teenage daughter sat down with me one night to watch, eventually asking, “Why aren’t we learning this stuff in school?”

I thought that was a great question. Our schools teach about historical events, but often times from the non-Native point of view. I hope my book opens the eyes of students and teachers to the two points of view. Both sides need to be studied. This is part of our history as a country.

Growing up in two worlds myself (Native and non-Native) as well as learning about different cultures (Lakota Sioux, German) made me knowledgeable and accepting of many differences and cultural viewpoints.

We were blessed with determined, hard-working parents who took us on many trips to South Dakota, Germany, and Australia to visit our family members. Many times, these experiences opened our eyes to the way people connected with each other, good and bad. We learned both sides and became stronger, more resilient people because of our experiences. This is my hope for my readers as well.
Lastly, I wanted to share a story about a Congressional hearing that took place in Washington D.C. Veterans provided testimony in support for the Code Talker Recognition Act. Some elders testified in their own language.
Since the hearings are recorded, this may be the first time testimony was documented in Lakota. I heard the pride in the veterans’ voices when they explained this, and it made such an impression on me that I pursued trying to have some of the code messages translated.
The incoming and outgoing messages are documented in the military files and I asked an elder who knew how to read and write the language if she would translate for me. Therese Martin worked tirelessly to complete this task for me.
Once I typed the messages, I wanted to make sure that the language was authentic and readable from another source. I contacted another elder, Vernon Ashley, who verified the coded messages. I’m pleased and thrilled that these two elders supported the efforts to include the Lakota language in the book.
Cynsations Notes 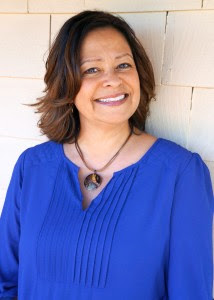 Her interest in her great-uncle’s story began in 1994 when a family member found a newspaper article about John Bear King, revealing his previously unknown World War II service. For 20 years, she gathered information on his story through interviews and research.

She is a member of the Society of Children’s Book Writers and Illustrators, The Rochester Area Children’s Writers and Illustrators and the New York State United Teachers.
Kirkus Reviews said Sioux Code Talkers of World War II is “an engagingly written, deeply researched account of a little-known part of World War II” and “Page explores not only the importance of these soldiers to the war, but also their history, culture, and values.”