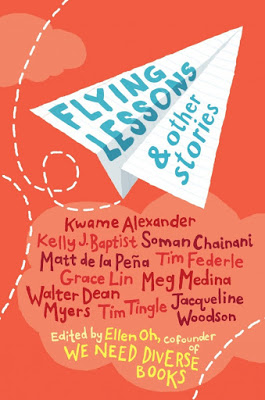 The Power of Representation by Ellen Oh from Nerdy Book Club. Peek: “In books, you can be anything you want. A rock star, an astronaut, a warrior queen…. Books allowed me to escape from the hardships of real life….But I didn’t know that it also helped me develop a complex. You see, all I ever read were books about white kids.”

The Convenient Indian: How Activists Get Native Americans Wrong by Melanie Benson Taylor from the Los Angeles Review of Books. Peek: “Indians have been in all the headlines about the protests against the Dakota Access Pipeline….The narrative here is so timeworn as to be banal: every epoch of American history has featured the callous removal of indigenous obstacles to the expansion of corporate capitalism.”

Angie Thomas Says The Hate U Give, Proves There’s a Market for Books With Black Characters by Victoria Sanusi from BuzzFeed. Peek: “‘Publishing does have a diversity issue…It’s easier for a young black boy in America to pick up a gun than to find a book where the main character is a young black boy and that’s a problem.”

Dhonielle Clayton on How The Belles Allowed Her to Explore Teen Issues by Nivea Serrao from Entertainment Weekly. Peek: “I write about things that bother me and this is something that Teenage Me was very bothered by: my body, it’s limitations, and why it didn’t look like magazines. I wanted to talk about a world where if you could change yourself down to your bones, what would it be like and what could you do?” 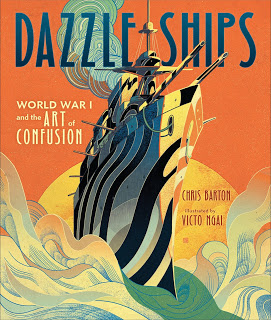 Cover Reveal: Dazzle Ships: World War I and the Art of Confusion by Chris Barton by Elizabeth Bird from School Library Journal. Peek: “…apparently during World War I it was believed that if you painted a ship in a dazzle pattern it could make it difficult for an enemy to estimate the correct range, speed, and heading. In other words, the perfect subject for a work of nonfiction by Chris Barton.”

Terry Pierce and Mama Loves You So! by Adi Rule from The VCFA Launch Pad. Peek: “My son Greg, and a song, were the inspiration. I got the idea when he was a baby (he’s now 32!)…..after hearing the song ‘Longer,’ by singer Dan Fogelberg, I thought that someone should write a children’s book using nature as a metaphor to show a mother’s love for her baby.”

Third Person Narration: Using the Zoom Lens by Sarah Callender from Writer UnBoxed. Peek: “Likewise, in fiction with third person narration, we have control over the distance between the narrator and the reader. Sometimes we want to snuggle the reader inside the head of a character. Other times, like when I am trying to work in a coffee shop, a more distant narration is preferred.”

The Importance of a Strong Opening Scene by Hallie Ephron from Jane Friedman‘s Blog. Peek: “Your opening scene can be long or short. It can be action packed, or moody and rich in description, or skeletal and spare….Regardless of what’s in that scene, the reader should have some idea of what the novel is going to be about after reading it, or at least have a good sense of the theme. Most of all, when they finish, readers should be eager to keep reading.” 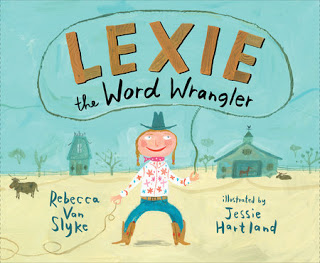 Q&A With Rebecca Van Slyke by Deborah Kalb from Book Q&As. Peek: “I love playing with words, and I’ve always wanted to be a cowgirl. Putting the two together just seemed natural! I was on a road trip over the mountains when the phrase “word wrangler” popped into my head….Her name, Lexi, came easily: it’s Greek for word!”

Is Your Character’s Face the Window to Her Soul? by David Corbett from Writer UnBoxed. Peek: “To know the face is to know the person. Our faces are the roadmaps of our lives—they reveal our lingering innocence and hard-won experience, our openness and suspicion, our capacity for laughter, our bitterness, our anxiety, our lightness of heart.”

Planning the Perfect Love Triangle by Roz Morris from Writers Helping Writers. Peek: “Consider why the lovers are attracted. For the cheating character, it’s usually something missing or unsatisfied. What does the lover add? It might be a dash of excitement or danger in a life that’s become too routine, but it might be the other way round.”

Learning to Outsource and Then Let Go by Sharon Bially from Writer UnBoxed. Peek: “…I’m convinced it’s incredibly important for writers to learn to let go. True, as writers we value our solitude and the control we have over our work. But for our work to have broader appeal, to speak broadly to readers and to transcend our immediate networks, we will have no choice but to outsource at least certain core tasks at some point.  After all, it takes a village to create a great book and bring it out into the world.” 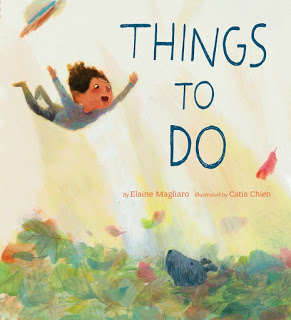 Illustrator Catia Chien On Failing by Mel Schuit from All The Wonders. Peek: “In early 2012 my life fell apart. I guess you can say it was a long time coming. I was raised in an emotionally and physically abusive family….I was working, illustrating two children’s books simultaneously. And I was trying to carve out some kind of life for myself. I was spread thin.”

How Are Children’s Publishers Talking About President Trump by Paula Willey from School Library Journal. Peek: “Only with a vast amount of context, much of which requires sophisticated analysis, can these elements be faithfully explained. Further, Trump’s public record is typified by negative, disputed, and sometimes vulgar statements. How do you fit that into 32, 60, or 100 pages using a low unique word count?”

Teaching a Novel by Teri Lesesne from Professor Nana’s Blog. Peek:”…when I read a number of tweets and posts about ‘teaching’ a novel, it simply set my curmudgeon teeth on edge. I teach students, not novels. My children’s lit class reads ore than 75 books a semester. The YA class reads about 25 books. I do not teach any of them. Students read the books. They respond to the books on a blog they create. They tie in other books, trailers, and the like. I do not take any title and ‘teach’ it.

Bookshare’s Free Ebook Library Making a Difference for Students with Print Disabilities by Omar Gallaga from the Austin American Statesman. Peek: “…before technology such as Bookshare, schools typically had the option of setting up a reading-disabled student with a ‘buddy reader’ student assistant, or sending the student to a content-mastery room, isolating them from the classroom. ‘Bookshare has allowed those students to be back in the classroom.’” 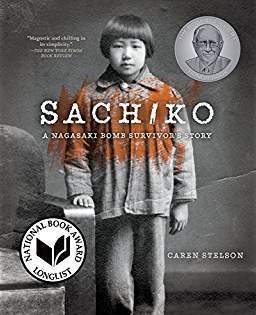 
How blessed am I? Last weekend, I had the opportunity to keynote at two diversity-focused children’s-YA literature/writing conferences–the Virginia Hamilton Conference at Kent State in Ohio and Kweli: The Color of Children’s Literature in Manhattan (NYC). At both, I spoke on my journey as a Native author, the importance of #ownvoices, writing across identity elements and how the conversation of books has evolved over the past twenty years.

Thank you so much to my hosts, especially those of you who came through with delicious dining and warm outwear for this naturalized Texan who’d forgotten about April snowstorms. Most appreciated!

Now, I’m joyfully polishing my YA novel in progress for my mid-May deadline. At this point, it’s mostly a matter of line-level work, though I have expanded a few scenes. Huzzah! 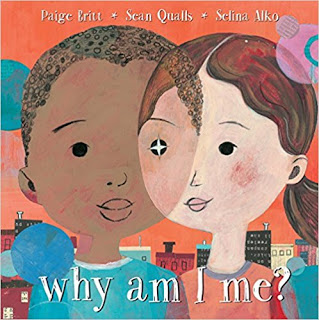 At last week’s Austin SCBWI meeting, I was honored to see the F&G’s (folded and gathered) of Paige Britt‘s upcoming picture book, Why Am I Me? illustrated by Selina Alko and Sean Qualls (Scholastic, September 2017).
Several months ago, I had a writing meet-up with Paige and saw a few digital copies of the illustrations. That made it even more exciting to witness the next step in the publishing journey of this story.