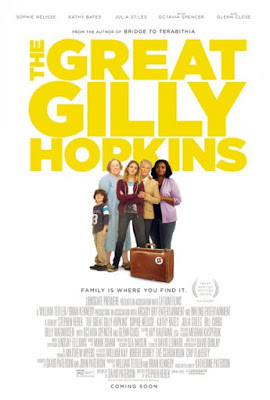 The Vermont children’s book community had an incredible treat on Oct. 7 at the Stowe Cinema 3Plex in Stowe, Vermont:

We all descended on a movie theater in Stowe where Katherine Paterson had opted to hold the premiere of the film adaptation of her National Book Award-winning middle-grade masterpiece, “The Great Gilly Hopkins” from Lionsgate. It was a formal champagne and popcorn kind of event.

(Begging a question: What Would Gilly Do? Somehow I see Mountain Dew hitting the screen during the touching scenes.)

Several generations of Patersons were there, including Katherine’s sons David (who wrote the screenplay) and John (who produced).

It’s a wonderful movie, with a cast that includes Glenn Close, Octavia Spencer, Kathy Bates, and, in a delicious little cameo, Katherine herself. Fans of the book will be delighted to see how much of the original dialogue has been lovingly retained – one of the benefits of having the author’s son as screenwriter.

Afterwards, Katherine admitted that Kathy Bates will now play Maime Trotter permanently in her head, and I think many of us would agree. The way she inhabited that iconic character was flawless and deeply moving.

The screening was followed by a panel with Katherine, David, and John talking about the genesis of both the book and the movie. They reminisced about the two children whose stay with the Paterson family in the late seventies led more or less to Katherine’s conception of the novel – and to her vision of Gilly’s rage at her situation. And they talked about how they’d maneuvered the project through Hollywood, trying to keep the story intact.

At the same time, they spoke frankly about why certain details differed from the book to the movie … the swapping of the case-worker’s gender, for example. (It would be a fun class discussion to have!)

It was a real delight to see the movie and then, immediately, hear these three talk about it.
The evening was organized by Vermont College of the Fine Arts as a benefit for Tatum’s Totes, a charity which provides emergency bags filled with clothes, blankets, and toys for foster kids in transit.

By the way,, the movie is apparently available for streaming online at all the usual venues (iTunes, Amazon), if it’s not showing at your local theater. Though that service doesn’t come with as many Patersons.

One thought on “Guest Post: M.T. Anderson on the Premier of “The Great Gilly Hopkins” Film”